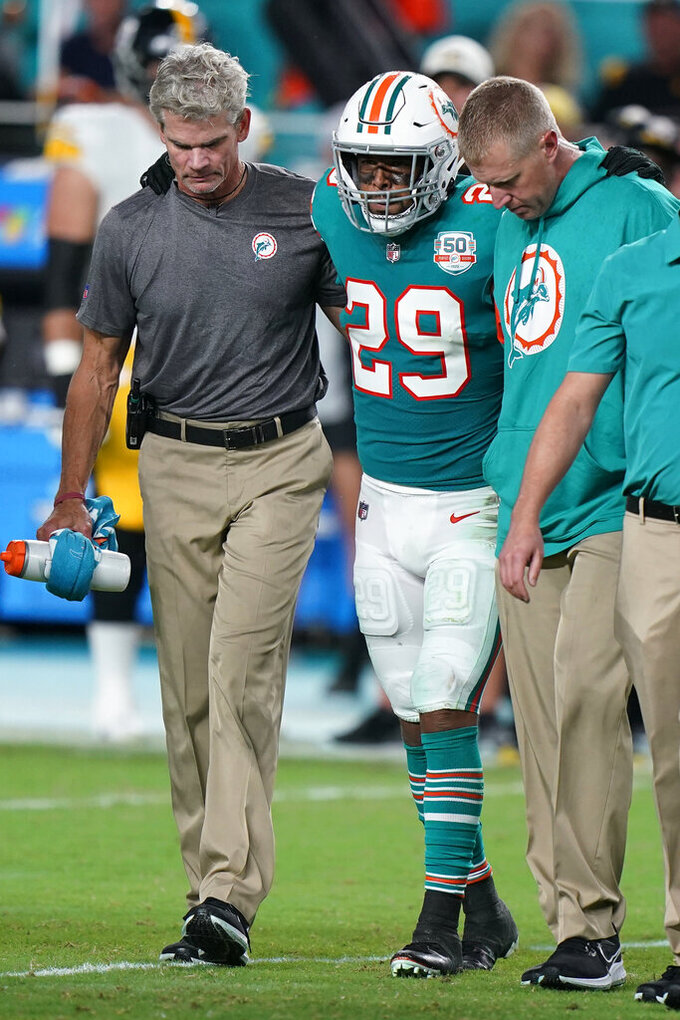 Miami Dolphins safety Brandon Jones (29) is assisted off the field during the second half of an NFL football game against the Pittsburgh Steelers, Sunday, Oct. 23, 2022, in Miami Gardens, Fla. (AP Photo/Wilfredo Lee )

Miami Dolphins safety Brandon Jones will be placed on injured reserve with a knee injury he suffered in the third quarter of Sunday's game against the Pittsburgh Steelers, coach Mike McDaniel said Monday.

“I’m not too excited about it,” McDaniel said about the latest setback for the Dolphins' secondary.

McDaniel didn’t say if Jones' injury will keep him out for the rest of the season. He will miss at least four games.

The team is seeking more medical opinions, and McDaniel expects to know more by Wednesday.

Jones had to be helped off the field while barely putting any weight on his left leg Sunday.

Miami's defense is already missing several key contributors. Cornerback Nik Needham tore an Achilles tendon a week earlier against Minnesota and will miss the rest of the season.

Kader Kohou, an undrafted rookie cornerback who'd made a mark through the first quarter of the season, has missed the past two games with an oblique injury. Cornerback Keion Crossen missed Sunday's game after suffering a knee injury last week.

And cornerback Byron Jones, who has been on the physically unable to perform list all season, is not expected to return this week. He had surgery on his lower left leg in March.

“The whole process is frustrating for all parties," McDaniel said. “But these things are individualistic in how people recover from things.”