Dolphins trying to stay afloat as injuries, mistakes pile up 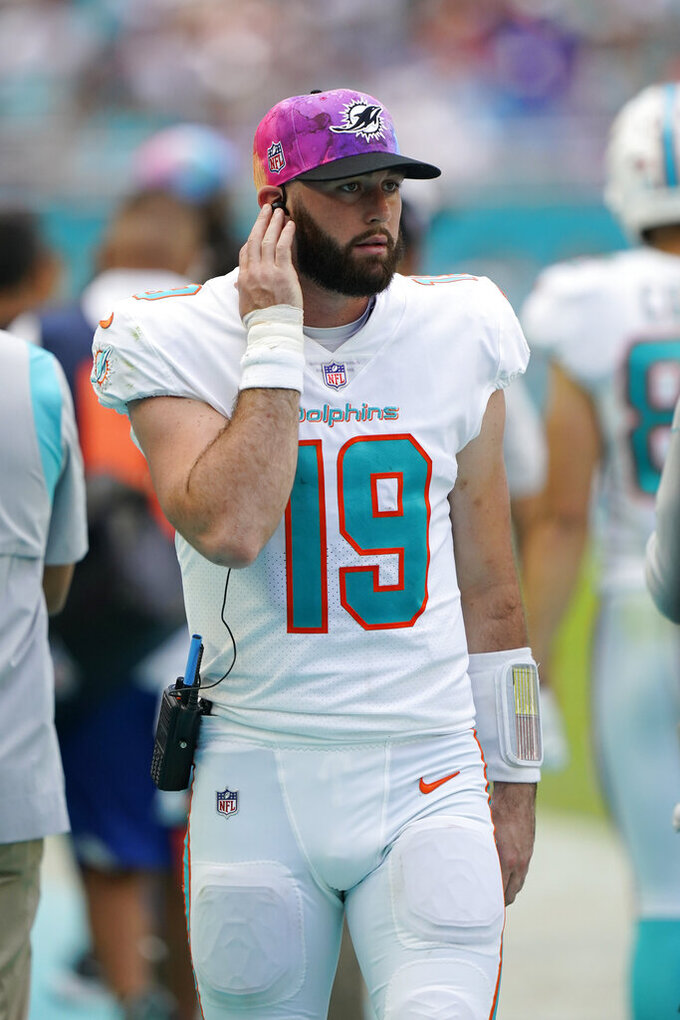 Miami Dolphins quarterback Skylar Thompson (19) walks on the sideline with a bandaged hand, during the second half of an NFL football game against the Minnesota Vikings, Sunday, Oct. 16, 2022, in Miami Gardens, Fla. (AP Photo/Wilfredo Lee)

MIAMI GARDENS, Fla. (AP) — Coach Mike McDaniel does not want his Miami Dolphins to attribute their three-game skid to their recent bad luck at quarterback.

“Of course it’s not ideal. You want the guys that get all the reps during the week to play,” McDaniel said. “But you always know that that’s a possibility. I’m going to demand that the team does not point at that to be a reason for what’s happened or a reason for the loss. I think that’s the easy thing to do.”

The reality is that for three straight weeks, the Dolphins have prepared with one starting quarterback only for another QB to play most of the game on Sunday. And that would be hard for any team to overcome.

Third-stringer Skylar Thompson practiced all week with the first-team offense ahead of Sunday's game against Minnesota while Tua Tagovailoa and Teddy Bridgewater advanced through the NFL's concussion protocol.

Thompson exited in the first half because of a right thumb injury — the fourth straight game in which a Dolphins quarterback had to leave the field. Bridgewater, who had just cleared the protocol on Saturday, replaced Thompson.

“This game is so crazy,” Bridgewater said. “It just applies to life, also. You wake up one morning prepared to do one thing, and boom, something happens, and how do you adjust?”

The Dolphins' offense hasn't been the same since Tagovailoa was injured on Sept. 29 at Cincinnati. Miami averaged 27.7 points in the games he started and finished, and that has slipped to 16 per game without him.

Injuries aside, the Dolphins played one of their sloppiest games of the season as penalties and turnovers halted their momentum.

Bridgewater threw for 329 yards but had two interceptions, and Jaylen Waddle fumbled to squander a fourth-quarter drive where the Dolphins has a chance to take the lead.

“Turnovers hurt us,” McDaniel said, “and overall the tightness of the ship, which, that’s what the head coach is there for, so you take that square in the eyes and you let the guys know that you’re going to bring a better effort next week."

The Dolphins' defense was much better after struggling the previous two games. Miami held the Vikings to 234 total yards and 156 passing yards -- their fewest in a game this season. Minnesota went three-and-out four straight times to start the game and punted 10 times.

Scoring. The Dolphins didn’t have trouble moving the ball with either Thompson or Bridgewater. Tyreek Hill and Waddle combined for 306 receiving yards. But penalties and injuries wiped away those efforts. The Dolphins got just two touchdowns and 16 points out of their 458 yards of offense.

The Dolphins suffered several injuries on defense, including a season-ending Achilles tendon tear for CB Nik Needham, a person with knowledge of the situation told The Associated Press on Sunday night. The person spoke on condition of anonymity because the team had not announced the severity of the injury. Other players hurt Sunday were LB Trey Flowers (foot) and CB Keion Crossen (knee). Waddle appeared to hurt his left shoulder after a 49-yard catch-and-run in the fourth quarter, but returned to the game — though McDaniel suggested the injury may linger.

8 — The number of consecutive games the Dolphins had won at Hard Rock Stadium before Sunday's loss. Miami hasn't won more than eight in a row at home since the venue opened in 1987.

Tagovailoa has cleared the concussion protocol and is expected to play Sunday night when Miami hosts Pittsburgh.