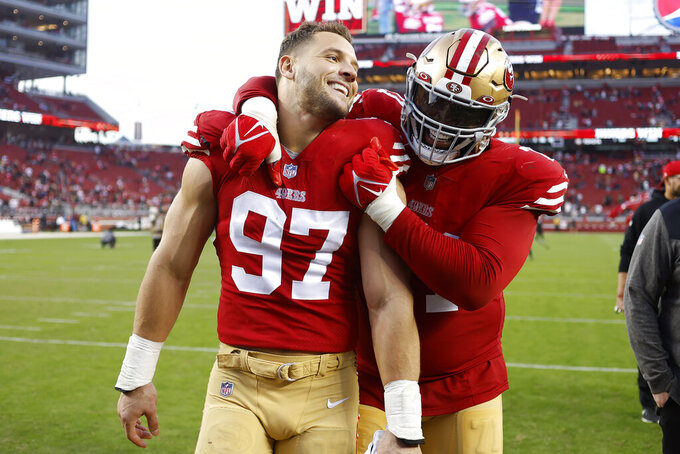 TURNOVER DIFFERENTIAL: Dolphins even; 49ers plus-1.

49ERS PLAYER TO WATCH: S Talanoa Hufanga had his first career forced fumble last week along with nine tackles. Hufanga had four INTs and seven passes defensed this season and will have a big responsibility patrolling the deep middle against Miami's big-play offense.

KEY MATCHUP: Dolphins tackles vs. 49ers DE Nick Bosa. Miami could be without both starting tackles Terron Armstead and Austin Jackson when the Dolphins face one of the top pass rushers in the game. Brandon Shell and Greg Little will have to deal with Bosa, who has 11 1/2 sacks and 30 QB hits this season.

KEY INJURIES: Armstead suffered a pectoral injury against Houston and his status is in doubt this week. ... Jackson (ankle) likely will not play. ... Mostert (knee) who missed last week’s game against Houston could return Sunday. ... The Niners will be without RB Elijah Mitchell (knee). ... Christian McCaffrey (knee) is questionable this week for San Francisco. ... Niners DT Arik Armstead (foot, ankle) returned to practice this week and could play for the first time since Week 4.

SERIES NOTES: The Dolphins have won four of the past five meetings in the series. ... The most memorable meeting came in the Super Bowl following the 1984 season when San Francisco beat Miami 38-16 for its second title. ... Dolphins coach Mike McDaniel spent the past five seasons as an assistant with San Francisco.

STATS AND STUFF: The Dolphins are seeking their fourth six-game winning streak in the past 30 seasons. The others were in 2005, 2016 and 2021. ... Miami is looking for its best start since beginning 9-3 in 2001. ... QB Tua Tagovailoa is 7-1 with 17 TDs, three interceptions and a 114.4 rating in eight starts against NFC teams. ... Tagovailoa has 1,529 yards passing (305.8 per game), 11 TDs and zero interceptions in his past five starts and has at least three passing touchdowns in three of four road starts this season. ... WR Jaylen Waddle has four 100-yard receiving games this season; WR Tyreek Hill has five. ... Hill had six catches for 85 yards last week. If he catches five passes Sunday, it would be his ninth straight game with at least five receptions, which is tied for the longest active streak in the NFL. ... Hill has 728 yards receiving in five road games this season and has had at least 140 yards receiving in four of five road games. ... Hill caught nine passes for 105 yards when Kansas City faced San Francisco in the Super Bowl in 2020. ... The 49ers are seeking their first five-game winning streak since 2019. ... San Francisco is the eighth team since the merger to allow no points in the second half in four straight games. ... The 49ers have allowed fewer than 100 yards rushing in eight of 11 games this season. ... Niners QB Jimmy Garoppolo has not thrown an interception in his past 137 pass attempts, the longest streak of his career. ... McCaffrey has gained a team-high 27 first downs in five games with the Niners. ... San Francisco K Robbie Gould made two FGs last week to tie Sebastian Janikowski and Jason Elam for ninth most all time with 436. ... Niners TE George Kittle needs 61 yards receiving to become the sixth TE to reach 5,000 in his first six seasons. ... San Francisco ranks sixth in the league converting 45.7% of third downs. ... Bosa is the fifth player since 2000 to have at least one sack in nine of his first 10 games in a season.

FANTASY TIP: With Mitchell sidelined and McCaffrey nursing a sore knee, undrafted rookie Jordan Mason could get a longer look at running back this week. Mason had five carries for 25 yards last week, but might be in line for a heavier load on Sunday.