Duvernay contributing in plenty of ways for Ravens 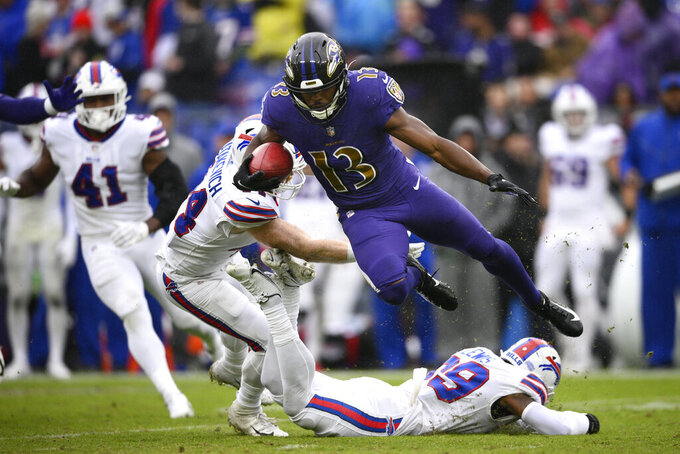 Baltimore Ravens' Devin Duvernay (13) returns a kick in the second half of an NFL football game against the Buffalo Bills Sunday, Oct. 2, 2022, in Baltimore. (AP Photo/Nick Wass)

OWINGS MILLS, Md. (AP) — In the first quarter of Baltimore's game last weekend against Cincinnati, a shotgun snap hit Devin Duvernay as he went in motion.

The third-year receiver calmly picked up the bouncing ball and ran for a 17-yard gain on the broken play.

Now matter how he ends up with it, when Duvernay has the ball in his hands, he's a problem for opposing teams.

“He’s just kind of taking steps every week,” coach John Harbaugh said. “He’s really impacting games now in a big way, with the return game and the pass, but now he’s still doing the return game, but in the passing game, he’s coming up with plays and running the ball.”

Duvernay was an All-Pro last season, when he ranked in the top 10 in both punt return average and kickoff return average. This season, he's emerged as one of the Ravens' top receivers, playing an important role after Marquise Brown was traded in the offseason and as Rashod Bateman deals with a foot injury.

Duvernay caught two touchdown passes in a season-opening win over the New York Jets, then returned the opening kickoff for a touchdown the following weekend against Miami. He's second on the team in receptions behind star tight end Mark Andrews.

“He's just got this sense about him, especially this year,” Andrews said. “Extremely focused, and he's doing his thing. He's playing really really well in all phases of the ball.”

According to the DVOA (Defense-adjusted Value Over Average) stat produced by Football Outsiders, Duvernay ranks No. 1 in the league among receivers with at least 20 targets.

“Duv's an all-around type player,” quarterback Lamar Jackson said. “He can catch the ball out of the backfield, run great routes, catch the ball at the receiver position."

A third-round pick out of Texas in 2020, Duvernay caught 53 passes through his first two seasons, but he mostly shined on special teams. He's a bigger part of the offense now.

With Bateman out for last weekend's game against the Bengals, the Ravens turned Duvernay loose a bit. He caught five passes for 54 yards, and Baltimore also used him in the running game. He lined up in the backfield and took a toss from Jackson, and he was also effective as a receiver running the jet sweep.

Duvernay ended up with 78 total yards of offense.

That comment was fairly typical of Duverney, who seems content to let his play speak for itself. So far that's made quite an impression.

“Extremely humble person,” Andrews said. “He's about his business. He doesn't want too much attention. He just wants to go to work, do his job and win some football games, which is an awesome teammate to have. I love Duv, and I love everything that he stands for.”

Linebackers Tyus Bowser and David Ojabo, who have been out with Achilles tendon injuries, were back at practice Wednesday. Ojabo was Baltimore's second-round draft pick this year.

“Very impressed,” Harbaugh said. “He said October. I remember he told me October. I might have mentioned that to you guys early on, and here he is practicing in October.”

Harbaugh said Ojabo wouldn't be ready to play this week, although he said it was too early to rule out Bowser.