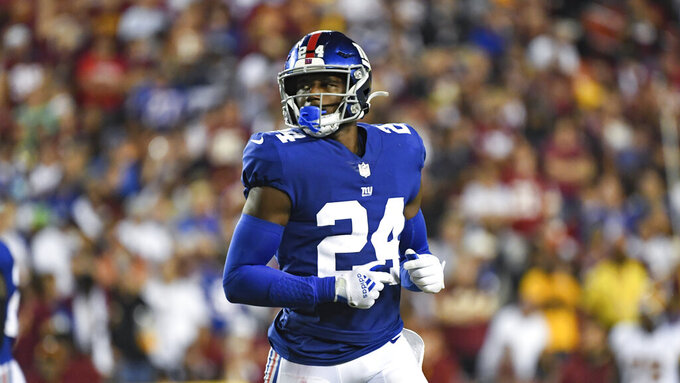 New York Giants cornerback James Bradberry (24) looks on between plays during the second half of an NFL football game against the Washington Football Team, Sept. 16, 2021, in Landover, Md. The Giants have released Bradberry. A starter for the team the last two seasons, including making the Pro Bowl in 2020, Bradberry is a salary cap casualty. He was due for a $21.9 million cap hit, so cutting him Monday, May 9, 2022 will save about $10 million. The team can designate him a post-June 1 release and save another $1.5 million on the cap for 2022. (AP Photo/Terrance Williams)

PHILADELPHIA (AP) — The Philadelphia Eagles strengthened their secondary, agreeing on a one-year contract with veteran cornerback James Bradberry on Wednesday.

Bradberry, who made the Pro Bowl in 2020, was released by the New York Giants on May 9 for salary reasons. He would have been a $21.9 million cap hit.

A second-round pick by Carolina in 2016, Bradberry spent four seasons with the Panthers and two with the Giants. He has 15 interceptions in 92 career starts.

Bradberry is the latest significant addition for the Eagles, who went 9-8 last season and lost to Tampa Bay in the wild-card round. Philadelphia signed linebackers Haason Reddick and Kyzir White in free agency and drafted defensive tackle Jordan Davis 13th overall and linebacker Nakobe Dean in the third round.