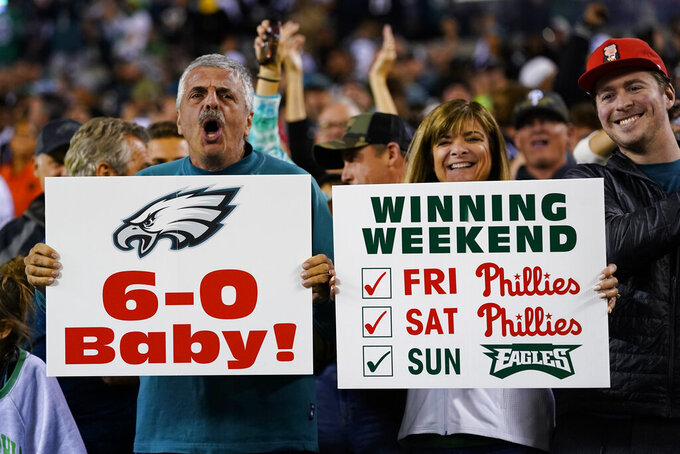 Philadelphia Eagles fans display signs for the undefeated Eagles and the Philadelphia Phillies after an NFL football game against the Dallas Cowboys on Sunday, Oct. 16, 2022, in Philadelphia. (AP Photo/Chris Szagola)

PHILADELPHIA (AP) — Nick Sirianni threw his head back as he walked into Philadelphia’s locker room and bellowed, “ How ‘bout them Eagles! ” The Eagles coach took delight in echoing the old Dallas catchphrase.

Sirianni had every reason to revel in the moment: The Eagles are the only undefeated team in the NFL.

That’s right, 6-0 for only the third time in franchise history, and first since the 2004 season when Donovan McNabb, Terrell Owens & Co. raced all the way to the Super Bowl.

Jalen Hurts, C.J. Gardner-Johnson and Darius Slay have the Eagles thinking a return trip is in order after a 26-17 win over the Cowboys on Sunday night in front of a packed house that included first lady Jill Biden, rapper Meek Mill, Joel Embiid and actor Bradley Cooper.

The Philly bandwagon is filling up.

“What’s so cool about Philadelphia is it’s such a great sports town that it matters here, and it matters nationally here, and it’s great to be able to put that on display,” Sirianni said.

For all the hype that surrounded the Eagles heading into Sunday, the reality was the Cowboys would have snagged the top spot in the NFC East with a victory. The Eagles squashed that with another dominant second quarter when they scored 20 points, increasing their second-quarter margin to 112-27 this season. The Cowboys pulled within 20-17, but Gardner-Johnson helped seal the win with his second interception of Cooper Rush and the Eagles' third of the game.

Sirianni and Hurts, who threw two touchdown passes, keep repeating that they’re not satisfied with a 6-0 start and there’s still plenty of room for improvement. It’s what they’re supposed to say but the Eagles have few true weaknesses.

“I think we have a long way to go as a football team in terms of our growth and our development,” Hurts said.

Maybe so. But they can at least enjoy the undefeated start as they head into an off week.

Let’s give the game ball to the Eagles on behalf of all Philadelphia sports. The Phillies are in the National League Championship Series. The Union host a Major League Soccer playoff game this week. The 76ers, an NBA title contender, open the season this week. Even the rebuilding Flyers are 2-0.

“It’s pretty cool when you’re able to play in front of a national audience in Philadelphia,” Sirianni said. “Great job, fans. It was rocking in there. It was rocking from play number one, and that sets the stage, that sets the tone. It just carried over all week from Game 3, Game 4 in Philadelphia, with the Phillies, the Flyers getting two big wins this week, and into the game.”

Gardner-Johnson walked out of the Linc with a plastic bag full of footballs for each interception and a game ball awarded to him. The safety, who pointed out a tattoo on his arm in honor of Meek Mill, showed up to his postgame press conference in shades and refused to talk about a hand injury he suffered in the second half. Gardner-Johnson, who was acquired from New Orleans in August, had an interception for the second straight game. All the Eagles needed to give up to get him were fifth-round and sixth-round draft picks. Not bad.

Special teams coach Michael Clay. The Eagles allowed a 63-yard kickoff return just before halftime that set up a Dallas field goal that made it 20-3 and gave the Cowboys some life. It’s not the first time Clay’s unit has struggled this season — the Eagles have done everything from getting their own field goal blocked to allowing a first down on a fake punt — and special teams miscues could cost them in the postseason.

T Lane Johnson suffered a concussion. The off week could help him recover.

It’s a needed breather this week before another home game, against Pittsburgh.