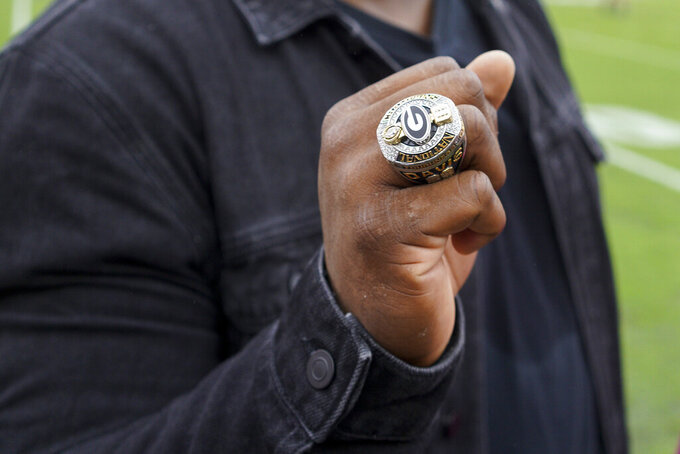 A.J. Brown got the new contract he wanted from a new team when the Philadelphia Eagles swooped in with another first-round trade.

The Eagles acquired Brown from Tennessee after swapping picks with Houston to move up and select Georgia defensive tackle Jordan Davis at No. 13 in the first round of the NFL draft Thursday night.

Philadelphia gave the Titans the 18th overall selection and a third-rounder (No. 101) for Brown, a 2020 Pro Bowl pick who has 185 receptions for 2,995 yards and 24 touchdowns in three seasons.

“A.J. was somebody we spent a lot of time on, had a lot of love for A.J. in that (2019) draft. Really excited to get him,” Eagles general manager Howie Roseman said.

Brown gives quarterback Jalen Hurts another playmaker at receiver, joining 2021 first-round pick DeVonta Smith. The Eagles also have Quez Watkins and Jalen Reagor, a 2020 first-round pick who hasn’t lived up to his potential. Brown and Hurts are close friends.

“We’re really excited to have him on this team,” Eagles coach Nick Sirianni said. “He’s a strong man, he’s quick for a big guy and he catches everything. There is no projection. You’ve seen him do it in the NFL for three years now.”

NFL Network reported the Eagles immediately agreed to give Brown a $100 million, four-year contract with $57 million guaranteed. Brown had been very active on social media wanting a new contract, and he was recently caught on video talking with Deebo Samuel, making it clear the Titans weren’t going above $20 million a year. Brown was the 51st pick overall out of Mississippi in 2019, and he had been the best receiver drafted by the franchise since moving to Tennessee in 1997. Brown played a full season only as a rookie.

“It was getting tight,” Roseman said about negotiating a contract extension during the draft. “We had a very detailed plan.”

The 6-foot-6, 340-pound Davis has unique athleticism and speed for a massive athlete who can anchor the middle of the defensive line. Davis ran a 4.78 in the 40 at the combine. He’ll join six-time Pro Bowl defensive tackle Fletcher Cox and Javon Hargrave on the interior line.

“You have guys like Hargrave and Fletch, and those are (some) of the best people,” Davis said. “Those are guys I watched growing up. So, to be an addition and to help the team, I just want to do anything I can to help.”

Davis played four seasons at Georgia, helping the Bulldogs win the national championship last season. He had seven sacks and 91 tackles in 47 games, and also had one rushing TD. Davis is known more for his ability to stop the run than rushing the passer.

“My get-off is getting faster,” he said. “I’m getting after the QB, I’m working bags, and I’m just willing to learn. You have great guys in the defensive room that can teach you little tools and can teach you a lot of things. Schematically, we’re similar to what we were doing in Georgia. So, it’s like going into the same place with the same playbook, it’s just different terms. It’s definitely going to be a smooth transition. I just have to get in that playbook and learn the nuances of the game.”

“He is unique,” Eagles vice president of personnel Andy Weidl said. “There’s not a lot of guys who come around with his size, athleticism and explosion, and ability to run.”