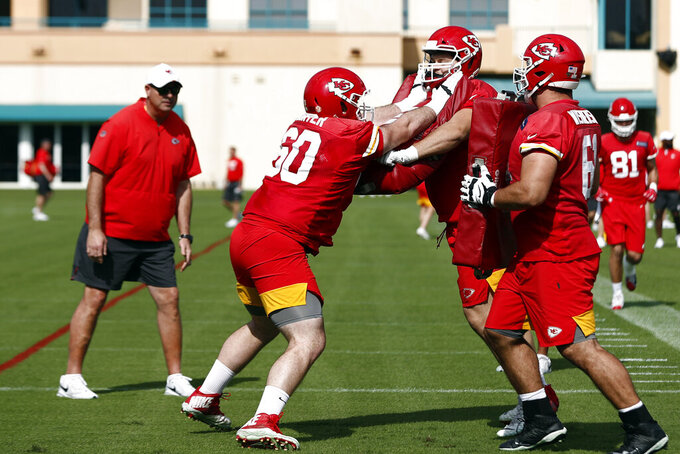 MIAMI (AP) — No family may be as invested in the Super Bowl as the Embrees.

Jon Embree is the tight ends coach for the 49ers, working alongside his son Taylor, who is a quality control coach in San Francisco.

His other son, Connor, works as a defensive assistant for the Kansas City Chiefs, guaranteeing that at least someone in the family will end up with a Super Bowl ring and someone else will have a crushing loss.

So who is Jon Embree's wife, Natalyn cheering for?

"I was told she was cheering for the Niners but I think she'll be heartbroken whatever happens," Jon Embree said. “I know how she is. I know my mom will be the same way because someone will be disappointed. But at the end of the day, as my son Taylor said, the house is getting a ring. One wins, we all win. That's how we all feel. But I want it to be my ring.”

It starts with right guard Laurent Duvernay-Tardiff, who was wrapping up medical school when the Chiefs drafted him out of McGill University in Canada. He's spent the past few offseasons finishing up his residency requirements, though he's decided to put his second career on hold while he plays out the five-year, $42.36 million contract he signed in 2017.

“I don't know there's anyone else that's done that,” right tackle Mitchell Schwartz said. “His desire to do the football thing and have a passion in another field that he excels in and does that in the offseason — I barely have time to work out.”

Schwartz is selling himself short. He merely went to the University of California at Berkeley. And when Duvernay-Tardiff asked who would be the best doctor on the team besides himself, Schwartz was the easy pick.

Those two tend to overshadow left guard Steven Wisniewski, who excelled while going to school at Penn State.

“He's brilliant. He's up there with Schwartz and Larry,” Chiefs coach Andy Reid said. “We might have, academically, one of the smartest groups. We got a doctor. I mean, come on. It's not bad."

Make-A-Wish is celebrating 40 years as an organization by bringing a record number of children to the Super Bowl.

The group granting the wishes of critically ill children has 19 wish kids and their families from 12 different states and Canada in Miami for the Super Bowl. The families arrived Thursday and received a private tour of Hard Rock Stadium on Friday. They're also walking the red carpet Saturday at the NFL Honors and will be at Sunday's game to cap the trip.

Make-A-Wish, which was founded in 1980, started teaming with the NFL in 1982 with the league helping grant the wish of John Paul Serna, a 12-year-old boy from Arizona who attended that year's Super Bowl. That was the ninth wish in Make-A-Wish history, and the organization has had at least one wish kid at every Super Bowl for 38 years with more than 250 wishes granted at this game.

"The NFL has been one of our longest-tenured sponsors, and we are truly grateful for all that the league does to make life better for wish kids and their families,” said Richard K. Davis, president and CEO of Make-A-Wish America.

NEW MURAL REMINDS STUDENTS TO SAY NO TO DRUGS

A new mural in Miami reminding students at Jackson Senior High to say no to drugs had some help from a pair of former NFL players. Pro Football Hall of Fame running back Marshall Faulk and former NFL safety Nick Ferguson collaborated with artist and firefighter Julian Reams and the Foundation for a Drug-Free World to design a mural unveiled Thursday during Super Bowl week.

The mural features a member of the Jackson Giants running with the ball and the words “drug free world.”

Ferguson got his start at Jackson Senior High and said a student came up to him at his alma mater to tell him he has had family and friends try to get him into drugs.

“These kids grew up in the same environment that I grew up in," Ferguson said. "I love my area and I love my school and I’ve always wanted to come back and bring something that was needed, so to do it as a professional athlete, at Super Bowl weekend, in my city, was awesome, it was impactful, it was emotional and it was really big for me.”

MISSED OPPORTUNITY, OR NOT

Sharon Clavin has had a pair of rare, unused tickets to the first Super Bowl between her beloved Kansas City Chiefs and the Green Bay Packers for 50 years, but how she came to have them is quite a story in itself.

Clavin's father, Billy Shanahan, was on his way to Los Angeles to see the matchup between AFL and NFL champions when he decided to stop in Las Vegas. He wound up getting hot in the casino and rather than head the rest of the way to the game in January 1967, he decided to stay in Sin City and keep the winning streak going.

He wound up missing the Packers' 35-10 victory over the Chiefs, but he kept the unused tickets for posterity.

“He was winning and never went to the game,” Clavin, who lives in the central Missouri town of Hermitage, wrote in a note to The Associated Press. “He gave them to me and I put them in a scrapbook for years until I figured out they might be valuable one dad. My mom and dad were both huge Chiefs fans. He died five years ago.”

The tickets, which will be auctioned in May by Heritage Auctions, have not been graded. But memorabilia experts say they have only seen about five other pairs of unused tickets, and they could fetch $50,000 or more at auction.

Under the partnership to develop and promote safer and smarter play, Pop Warner will encourage its leagues to earn recognition within USA Football’s League Excellence Program, for the 2020 season.

Through the League Excellence Program, USA Football will recognize and promote youth leagues that adopt its Football Development Model (FDM). The FDM is designed to make the game safer by reducing contact and teaching the game based on an athlete’s age, the skill they are learning and game type.

To better understand player development through the sport, the entities will work together to share data and insights on the player progression through the various game types, noting ages and stages of development in order to continually enhance player, coach and youth league education and safety resources.