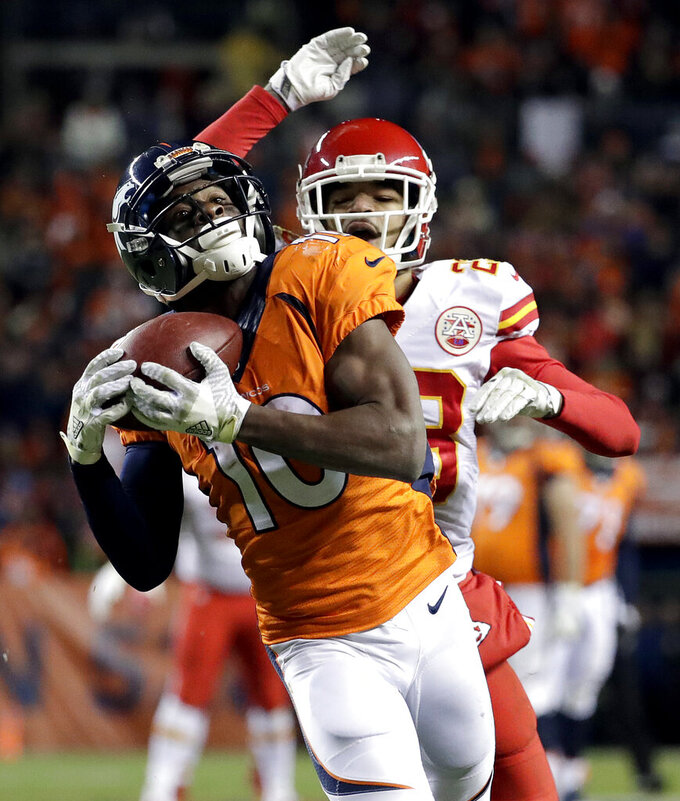 ENGLEWOOD, Colo. (AP) — Emmanuel Sanders would rather chase his young kids around now than hunt down any more passes over the middle.

The veteran wide receiver announced his retirement Wednesday after a 12-year NFL career that included six seasons in Denver, where he helped the Broncos win Super Bowl 50.

“The game of football is tough on the body, and you know I lost a close friend in Demaryius Thomas," who died last December of a seizure, Sanders said. "And for me, it's about longevity of life now. I had a heck of a career, 12 years, three Super Bowls. I feel like what else do I have to prove?

“I wake up in the morning, drop the kids off at school. I'm making sandwiches for my daughter. I see the beauty in that,” Sanders said. “And I'm happy. So for me, there's never really a ‘right’ time to hang it up. But I'm happy to hang it up now.”

Sanders said he plans to do some television broadcasting in retirement.

Sanders started his career in Pittsburgh in 2010 as a third-round pick out of SMU and he joined the Broncos as a free agent in 2014 after coming close to signing with the rival Chiefs — he was at their headquarters about to sign with Kansas City when John Elway called him with a better offer.

Teaming up with Thomas and Peyton Manning, he called Denver “wide receiver heaven” upon his arrival in Colorado and over the next three years he'd catch 279 passes for 3,847 yards and 21 touchdowns.

He played in three Super Bowls, with the Steelers as a rookie, the Broncos and the 49ers, who acquired him from Denver midway through the 2019 season.

Sanders, who played for the Saints in 2020 and the Bills in 2021, finished his career with 704 receptions for 9,245 yards and 51 touchdowns in the regular season and another 52 catches for 622 yards and a touchdown in the playoffs.

At 5-foot-11 and 175 pounds, Sanders was viewed as a slot receiver coming out of college, but in Denver he successfully lined up outside opposite Thomas.

“Any time I go out in public the first thing somebody tells me is you do not look like an NFL receiver,” Sanders said. “And I'll tell them, ‘Go look on YouTube. You’ll see me coming across the middle and I'm taking every hit, I'm making every catch.'”

At his retirement news conference Wednesday, the Broncos displayed a photo of Sanders and Thomas doing “snow angels” in the blue and orange confetti after beating Tom Brady and the New England Patriots in the AFC championship to reach Super Bowl 50.

Sanders called it one of the highlights of his career.

Another came two weeks later when he helped the Broncos win Super Bowl 50 over the heavily favored Carolina Panthers.

“I gave the game everything that I had," Sanders said, “and the game gave it back to me."