Empty seats make for some strange sights, sounds in NFL 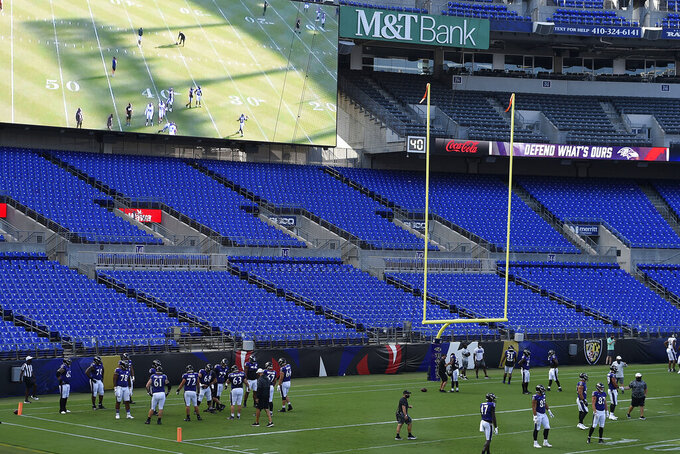 DENVER (AP) — Broncos quarterback Drew Lock felt like he was at the library, whispering in the huddle at empty Empower Field so the Tennessee Titans couldn’t eavesdrop.

All the vacant seats at Gillette Stadium had Patriots star Julian Edelman reminiscing about his time in junior college.

Aaron Rodgers capitalized on the silenced Gjallarhorn in Minneapolis to repeatedly draw defenders offside with his signature hard count, something that’s next to impossible in the normal din of a packed US Bank Stadium, which was unoccupied last weekend.

The coronavirus pandemic that has altered the sports landscape from youth leagues to the pros resulted in just two teams permitting spectators on the NFL's opening weekend.

The Super Bowl champion Chiefs allowed 16,940 fans into 77,000-seat Arrowhead Stadium for their season kickoff against Houston, and the Jaguars allowed 16,800 fans for their game against the Colts on Sunday, although only 14,100 fans showed up.

The 16 teams who opened on the road have their home openers in Week 2 that began with the Browns allowing 6,000 fans into FirstEnergy Stadium for their game against the Bengals on Thursday night.

Texas Gov. Greg Abbott is allowing 50% capacity at sporting events but Cowboys coach Mike McCarthy indicated Wednesday that the crowd will be about half of that.

The Broncos actually allowed 500 spectators Monday night, guests of players and coaches who sat separated in the lower bowl as a sort of test run for Week 3 when 5,700 fans get to watch Tom Brady and the Buccaneers.

Lock and his teammates sorely missed the usual crowd buzz when they were futilely trying to fend off a last-minute comeback by the Titans, who won it on a field goal in the waning seconds.

“Yeah, that would have been sweet,” Lock said. “It was really weird out there. No noise, the timeouts, it was quiet. I wanted to call the play quietly in the huddle because I didn’t know if they could hear us calling plays. It was weird."

McCarthy isn’t sure having the largest crowd on hand over the first two weeks of the season will matter when the Cowboys host the Falcons.

“We’ll find out,” he said. “I think the word different, unusual, however you want to describe it.”

McCarthy was taken aback by the atmosphere last weekend when the Cowboys helped christen the new $5 billion SoFi Stadium in Los Angeles with a thriller against the Rams.

Fans watching from afar had two advantages, including artificial crowd noise culled from previous games by NFL Films that was different than the noise piped into the stadium. That gave viewers a more natural audio experience and at least those streaming or watching the game could hear the referee explain calls.

Onsite, “you couldn’t really hear the referee, when he was talking, making calls and so forth,” McCarthy said. “I think it’ll be a lot different in AT&T Sunday because obviously we’ll have 25% capacity. So we’ll have some live energy in the building."

Lions QB Matthew Stafford said at empty Ford Field “the TV timeouts feel like they’re forever. It’s just super quiet in there.” The silence Sunday was especially eerie when a player got injured and the piped-in crowd noise was cut off “and it was just crazy quiet,” he added.

The sea of empty seats at Gillette Stadium put Edelman in a reflective mood.

“Honestly, it reminded me of the times I was back at the College of San Mateo, my junior college,” Edelman said. “It was a full love-of-the-game type mentality out there. You could hear the other guys, everybody could hear each other. It was about going out and playing the game that you love. It was obviously unfortunate that we don’t have any fans. That energy and getting to go out there in front of 75,000 people is amazing, but it ... brought me back at least to high school, junior college, college. My college, we didn’t really sell out that much, so it felt like that.”

Without fans cheering or jeering, players had to tap into their own vibes and even had to lean on each other to see if a play downfield worked.

“It was more of just a strange feeling with nobody in the stands,” Rodgers said. “It doesn’t let you know if a play is a good play sometimes. You’re so used to: If noise persists, it’s probably an incompletion or a good play by the defense; if the noise stops, it’s a good play for the offense. There was no noise, so we had to bring our own kind of energy.”

Dolphins quarterback Ryan Fitzpatrick said tapping into one’s own energy and riding the emotions of momentum shifts wasn’t as easy without fans.

Some teams will start allowing fans into the stands this month but others like the Rams and Raiders won’t allow crowds at all this season because of COVID-19, ensuring 2020 will remain a strange year for sports to the very end.