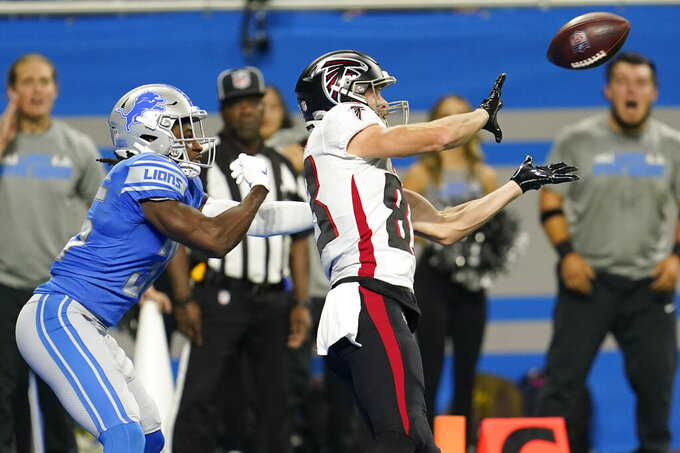 FILE - Atlanta Falcons wide receiver Jared Bernhardt catches a 21-yard pass for a touchdown during the second half of a preseason NFL football game against the Detroit Lions, Friday, Aug. 12, 2022, in Detroit. Just two years after being honored as the nation’s top college lacrosse player, Bernhardt is trying to make it as an NFL receiver with the Atlanta Falcons. (AP Photo/Paul Sancya, File)

ATLANTA (AP) — Jared Bernhardt traded in his stick for the pigskin.

Less than 15 months after being honored as the nation's top college lacrosse player, Bernhardt has taken on the challenge of making it as an NFL receiver with the Atlanta Falcons.

“It's very difficult," he conceded. "You're at the top of the sports world, the elite of the elite. That's kind of what brought me to it, competing against the best. I'm just trying to come out here and give it my all. That's all I can really ask for.”

If the Falcons were a lacrosse franchise, the 24-year-old Bernhardt would undoubtedly be one of their best players.

He starred for five seasons at Maryland, where he helped the Terrapins to a national championship as a freshman and was honored with the sport's version of the Heisman Trophy after his record-setting senior year.

He left College Park as the school's career leader with 202 goals and 290 points.

Now, he's the longest of long shots on the gridiron, chasing a dream he laid out with his father Jim Bernhardt, who coached at the high school, college and NFL ranks before his death in 2019.

Jared Bernhardt has played football before, both in high school in his native Florida and for another season after transferring last summer to Ferris State, a Division II college in Michigan. But he was an option quarterback, never a receiver.

So, not only has he given up his best sport, he's trying to make the NFL at an entirely new position.

“There's a lot of changes,” Bernhardt said after a practice this week at Mercedes-Benz Stadium. “Obviously, it's a transition. But no excuses out here. You've got to come out here and do your job.”

Despite being a neophyte at receiver, Bernhardt doesn't look entirely out of place.

In Atlanta's first preseason game, he hauled in a 21-yard touchdown pass from Desmond Ridder with 90 seconds remaining to give the Falcons a 27-23 victory over the Detroit Lions.

Bernhardt appeared to be relying on some of his lacrosse skills as he suddenly darted toward the middle of the end zone, muscled away from a defender and cradled the desperation throw just inside the goal line.

Asked if he was channeling his lacrosse days when he hauled in that TD pass, Bernhardt replied, “A little bit.”

“Everyone wants to say the agility, the change of direction, and there are things like that," he added. “But I think football is in its own category. There's so much you've got to learn, especially being a receiver, just the craft of it, the routes, processing the plays and everything.”

Falcons coach Arthur Smith looks at Bernhardt more as a football player changing positions than a guy attempting to master an entirely new sport, noting that he guided Ferris State to a national title last season.

In the championship game, Bernhardt rushed for three touchdowns and 148 yards — while never attempting a pass — in a 58-17 rout of Valdosta State.

Even with that pedigree, Smith has been impressed with how Bernhardt is soaking things up.

“I’ll say it’s been pretty eye-opening to see how quickly he’s made the transition,” the coach said. "I’ll give him credit there. The other night (against the Lions), you can see his spatial awareness as he went to box a guy up to get to the top of the route. So I’m excited to keep working with him.”

Bernhardt misses lacrosse. He still keeps up with the sport, including the recent competition at the World Games. His brothers are playing now. So are many of his friends.

He smiles a bit when asked if he might return to his former sport if this NFL thing doesn't work out — especially with lacrosse under consideration for the 2028 Los Angeles Olympics.

“I may leave you with a dot-dot-dot on that one,” he said coyly. “But fingers crossed (on the Olympics). The sport keeps growing. I love to watch it anytime I can. I think it has a good shot. That would be something really big for the sport.”

As for the NFL, the Falcons might be Bernhardt's best opportunity to pull off his improbable quest. They are going through a major rebuilding job and have scant depth at receiver behind first-round draft pick Drake London.

Even with those factors working in his favor, it would be a huge surprise for 6-foot-1, 195-pound Bernhardt to make the regular-season roster. His best bet is probably to earn a spot on the practice squad, which would give him a chance to hone his receiving skills while working during the week against players such as A.J. Terrell, one of the league's best cornerbacks.

If nothing else, Bernhardt has drawn plenty of attention in training camp.

Everyone loves an underdog story at this time of year, when all dreams seem possible.

When Falcons general manager Terry Fontenot saw Bernhardt surrounded by a group of reporters after practice, he couldn't resist taking a little poke.

“You're doing media now?” Fontenot yelled toward the lacrosse-turned-football player. “I love it!”

Bernhardt dropped his head, a bit embarrassed by the attention.