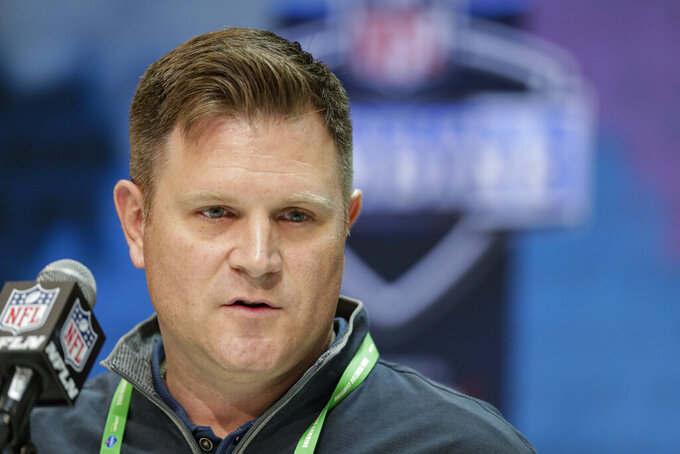 FILE - Green Bay Packers general manager Brian Gutekunst speaks during a press conference at the NFL football scouting combine in Indianapolis, Tuesday, Feb. 25, 2020. Two decades have passed since the Green Bay Packers last drafted a wide receiver in the first round. The Packers have two chances and plenty of reasons to stop that trend this year. (AP Photo/Michael Conroy, File)

The Packers already were picking 28th and 59th before they acquired the 22nd and 53rd overall selections in the trade that sent All-Pro receiver Davante Adams to the Las Vegas Raiders. That gives them two picks in each of the first two rounds of the draft that runs Thursday through Saturday.

Gutekunst wasn’t tipping his hand Monday on whether these extra picks might make him more likely to make trades.

“Having more picks in the top three rounds than we’ve had in a while, there’s probably temptations on both sides to move around a little bit or just to sit and pick as well,” Gutekunst said. “So we’ll see what’s available, and I think a lot of it is just going to be how the draft falls.”

Green Bay's selection of Georgia cornerback Eric Stokes with the 29th overall pick marked the first time since Gutekunst took over as general manager in 2018 that the Packers stayed in their original first-round draft positions rather than moving up or down.

The previous time the Packers had two first-round picks was in 2019, when they had the 12th and 30th selections. They kept the 12th pick to take Michigan outside linebacker Rashan Gary, but traded up nine spots to take Maryland safety Darnell Savage at No. 21.

Green Bay started the 2018 draft with the 14th overall pick, but traded down to 27 and then moved back up to 18th and took Louisville cornerback Jaire Alexander. The Packers traded up four spots in 2020 to take Utah State quarterback Jordan Love with the 26th pick.

“You’ve got to be careful of falling in love with players, right, because then you start chasing things and getting out of whack value-wise and stuff,” Gutekunst said. “So you’d love for (the draft board) to come to you, but at the same time, I think you have to be realistic about where you’re picking and where the strength of the draft is and if it makes sense to move to a particular area to help your football team, I think you have to be willing to do that.”

Gutekunst said this draft is unusual because so many college players decided to use the extra year of eligibility the NCAA granted them because of the pandemic. Gutekunst said that has made this draft deeper in the later rounds while also featuring plenty of players who are older than the typical incoming rookie.

Although the Packers have had the NFC’s best regular-season record each of the past two years, they enter this draft with some pretty clear needs after losing plenty of key players over the past several weeks.

Green Bay also must improve an offensive line that lost two starters from last season after the Packers released Billy Turner and lost Lucas Patrick in free agency. The Packers also need upgrades on the defensive line and could use a pass rusher to complement Gary and Preston Smith.

But the most obvious hole is at receiver as the Packers must replace Adams, who had the most catches (432), yards receiving (5,310) and touchdown receptions (47) of any NFL player over the past four seasons. Green Bay also lost wideouts Marquez Valdes-Scantling and Equanimeous St. Brown in free agency.

The Packers began rebuilding their receiving group by signing veteran Sammy Watkins, the No. 4 overall pick in the 2014 draft.

“He’s got some juice still left in him, I think,” Gutekunst said. “I think adding a veteran receiver was something we wanted to do.”

Gutekunst was asked Monday about the possibility of the Packers pursuing another veteran wideout.

“Across the board at every position, I think we’re kind of looking at everything right now,” Gutekunst said. “So I think this draft’s going to be really important, and then we’ll see where we sit after the draft and we’ll move forward at that point.”