Falcons coach shakes off butterflies on first day of camp 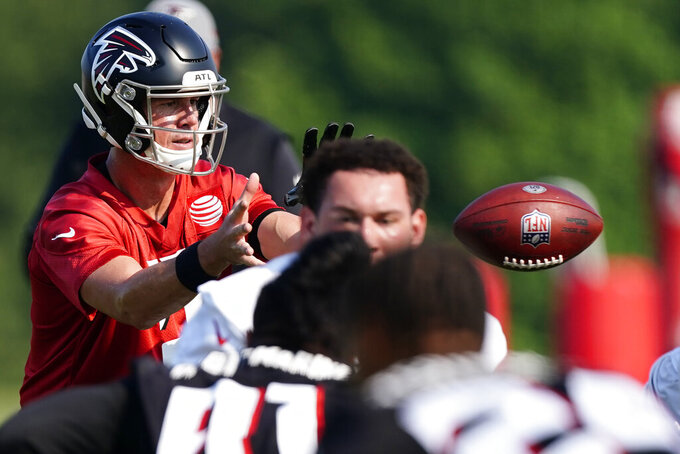 FLOWERY BRANCH, Ga. (AP) — New coach Arthur Smith felt a few jitters on his first day of training camp with the Atlanta Falcons. Once the first horn sounded on the field, however, Smith jumped right in and took charge.

“My mind was working on trying to get some sleep last night,” he said Thursday. “You’re restless. You’re excited. It’s like the first day of school, but once that horn goes, it’s on. I’m coaching, trying to make sure I touch every part of the team and do my job. It was fun. It was fun to be out there.”

The Falcons, who open the season Sept. 12 against Philadelphia, are coming off a 4-12 record that included the firing of Smith’s predecessor, Dan Quinn, and general manager Thomas Dimitroff after a 0-5 start. They’ve essentially cleaned house from the 2016 team that made it to the Super Bowl with only four starters — quarterback Matt Ryan, left tackle Jake Matthews, defensive tackle Grady Jarrett and linebacker Deion Jones — still with the team.

Thus, it’s not hard for Smith, who took over after spending the last two years as Tennessee’s offensive coordinator, to imprint his vision on how the team should look and play.

“When I got this job, there’s been good coaches here and there’s been good players,” Smith said. “All I know is there’s ways we want to do things and guys that I’ve learned from, and you pick the best of what you truly believe in so they know that and know the expectations. It’s my job to make sure from the top down that we follow through and enforce it. Follow through with what you say.”

Smith wants the team to practice at a quicker tempo than they might be accustomed to. Assistant coaches were barking out orders, and players were responding by digging in and going harder.

“It’s deeper than the messaging,” Jarrett said. “It’s about putting the product on the field. Putting the work in. He made it clear we’re not going to be about slogans and all this. The best players are going to play. The toughest dude is going to play. Ain’t no fluff. We’re going to try and get the best out of everybody day in and day out. I can’t do nothing but respect it. I love that about him.”

After spending his career coaching offense, Smith has bigger duties as head coach. He still plans to call the plays on offense but has turned over daily operations to offensive coordinator Dave Ragone. Dean Pees was lured out of retirement for the second time to serve as defensive coordinator.

Atlanta struggled on both sides of the line of scrimmage last year. The passing attack did fine with Ryan, the 2016 NFL MVP, at the helm, but the running game was next-to-last in the league with an average of 3.7 yards per carry. The pass defense was the worst in the league, allowing 293.6 yards per game. They gave up 66 pass plays of 20 or more yards, tied for most in the NFL.

“I’m trying to be everywhere,” Smith said. “You don’t want anyone to see you as just an offensive coach. No, I’m the head coach. I’m in other meetings. I come out here, there’s a lot we meet on and talk about in the building here, and you’ve got to hire a good staff and let them coach. I don’t need to micromanage. I like to be present and move around so I get a pulse of the whole team.”

Falcons owner Arthur Blank hired Smith in January after three rounds of interviews. Blank considers Smith to be “very smart and a good listener” with “confidence and humility alike and doesn’t assume he has all the answers.”

“He knows exactly the kind of moves he has to make to get there and he has a clear sense of direction,” Blank said. “He was one of the top offensive coordinators the last two years in the NFL, not just in kicking field goals but scoring touchdowns. In the NFL, you’re going to win some games by field goals, but you’ve got to score touchdowns, too.”

Notes: Smith said OL Matt Gono (neck) and DT Deadrin Senat (upper body injury) will miss all of training camp. Both are on the physically unable to perform list with RT Kaleb McGary. Smith added that McGary, whose injury hasn’t been disclosed, should be able to return “sooner rather than later.”... Blank said he tried to contact Julio Jones before the disgruntled receiver was traded to Tennessee but had no luck. “Julio had certain aspirations and wanted to do it someplace else," Blank said. “That was not our original intent. We have tremendous regard for the player and for the human being as well. He’s given us 10 great years. That’s about half of my ownership. He set all kinds of records. One thing about football is you want a locker room of players who want to be here. I was disappointed he felt that way."