Falcons slipping in NFC South after 3rd loss in 4 games 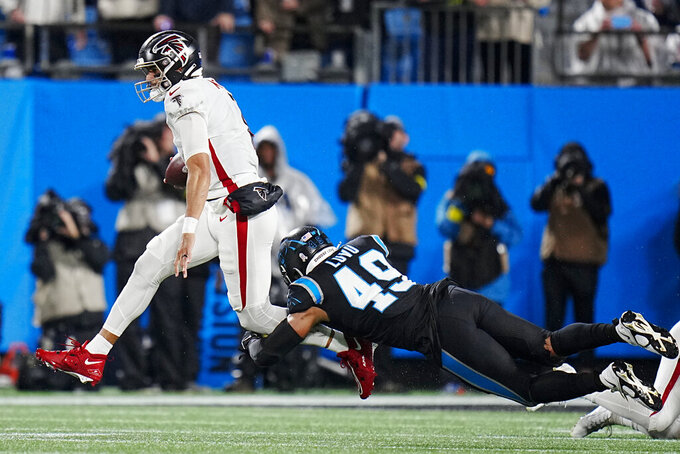 CHARLOTTE, N.C. (AP) — The Atlanta Falcons were one of the NFL’s feel-good stories the first month the season.

But any NFC South title aspirations might be starting to slip away from the Falcons after three losses in four games, including a disappointing 25-15 defeat to the Carolina Panthers on Thursday night.

It was Atlanta’s second loss in five days after falling 20-17 to the Los Angeles Chargers on Sunday — a game it had to have to remain in first place in the division.

“Yeah, it’s tough," Falcons quarterback Marcus Mariota said. “To lose two straight in five days is a tough pill to swallow. But at the same time, we can take this little break, flush it and move on. We’ve got seven games to play.”

The Falcons (4-6) entered the night tied for first place with Tampa Bay, but fell a half-game behind the Buccaneers, who’ll play Sunday against the Seattle Seahawks in Munich, Germany.

“There’s a lot of things we’ve got to do better," Atlanta coach Arthur Smith said. “And it starts everywhere. It starts at the top with me.”

The reality is the Falcons are a one-dimensional offense, which will only go so far in the NFL.

Atlanta came in ranked fourth in the league in rushing, but 30th in passing.

The Panthers countered by putting extra defenders in the box with the focus on taking away Tyler Allgeier and Cordarrelle Patterson in the run game and forcing Mariota to beat them through the air. While he threw for 186 yards and two touchdowns, Mariota was also sacked five times and threw an interception.

“They started loading up the box," Mariota said. "Unfortunately, when you’re not making plays in the passing game, they can do that."

Mariota made plenty of mistakes.

Officials bailed him out of his biggest one when he simply heaved the ball downfield underhanded as he was going to the ground, hoping for a completion. The Panthers intercepted the pass and took it back for what they thought was a defensive touchdown, but officials ruled Mariota down by contact before he released the ball.

“I was playing a little bit outside of myself trying to make a play too many times,” Mariota said. “And it hurt our team.”

That's been an area that has hurt him through the years.

“Looking throughout my career, that’s when I get in the most trouble — ill-advised throws, forcing things down the field instead of just scrambling and keeping the chains moving," Mariota said.

Atlanta's success running the ball — it was averaging 162.9 yards per game on the ground — had masked some of the problems in the passing game. But Atlanta's aerial deficiencies were never more evident than on the final drive.

Down by seven, the Falcons had the ball at their own 34 with 2:33 left on the clock.

But the Falcons ran four plays — one resulting in an incompletion, another a 1-yard loss and two in sacks. They lost a combined 15 yards on the possession and turned the ball over on downs.

The Panthers added a final field goal to seal the win.

The loss also leaves the door cracked open for the Panthers (3-7), who are lurking 1 1/2 games behind the Buccaneers and have the best record in the division at 3-1.

Panthers defensive end Brian Burns said he “definitely” feels like the division is up for grabs.

“But, we don't want to focus on that,” Burns said. “We don't want to get too focused on the whole bigger picture and not see what is right in front of us.”