FANTASY PLAYS: Players to start and sit for NFL Week 17 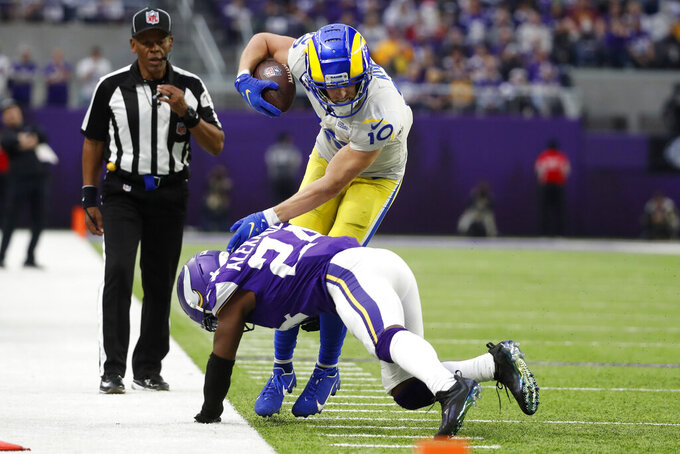 Taysom Hill was activated from the COVD-19 list this week, and the simulations have him back as a borderline QB1 for Week 17 against the Carolina Panthers. Hill has run 11 times in each start this season and has rushed for 101, 73, and 33 yards in those games. The rushing upside puts him right back into the streaming mix for Week 17′s championship games.

Joe Burrow is in another potential shootout game after his Week 16 where he had 525 yards and four touchdowns. The Kansas City Chiefs rank eighth in adjusted pass defense, per numberFire’s adjusted metrics. Even against top-12 pass defenses (four games), Burrow has averaged 261.8 yards and 1.8 touchdowns per game. He’s a viable streamer with upside.

Keep an eye on the news with Jimmy Garoppolo. He has a chance to play this week, but if he’s ruled out, then we can add Trey Lance into quarterback-needy lineups. Lance is nearly 40% likely to return a top-12 quarterback week even with a full slate of games and some good matchups for the league’s best passers. The anticipated rushing workload should also lead to a high floor.

Bench if possible: These quarterbacks are under 35% likely (18th or worse) to net a top-12 result and likely aren’t in the one-quarterback-league conversation.

With Clyde Edwards-Helaire unlikely to play this week (he missed practice on Wednesday), we can turn to Darrel Williams. Williams, in five games without Edwards-Helaire this season, has averaged 13.8 carries and 5.4 targets for 94.0 yards from scrimmage and 15.4 half-PPR points per game.

Elijah Mitchell returned to practice in a limited fashion on Wednesday, a good sign for his chances to return. While he may lose some of his peak role to Jeff Wilson, either a start by Trey Lance or an injured Garoppolo should lead to a strong workload for Mitchell against the Houston Texans, who rank 26th in rushing success rate allowed to running backs.

Ronald Jones didn’t really have the role we had all hoped for, and while that might make him a “sit” suggestion in a more traditional start/sit column, the reality is that he’s in a fine spot to be started in Week 17, provided he’s the best option you have for an RB2 or FLEX play. Jones played on 51.6% of the Tampa Bay Buccaneers’ snaps and had 20 carries with three targets but did lose a lot of snaps (35.5%) to Ke’Shawn Vaughn. Still, a 50% snap rate with good work on those snaps against the New York Jets is hard to ignore.

Devin Singletary’s role rolled back a little with Zack Moss active in Week 16. However, Singletary still played on 70.7% of the Buffalo Bills’ snaps with 12 carries (five in the red zone) and six targets. The Atlanta Falcons are 28th in adjusted fantasy points per carry allowed to backs.

Though DJ Moore’s matchup is problematic, the volume lately hasn’t been. Moore’s seen at least 10 targets in his past four games, leading to a 29.0% target share within that split. Moore generated an eight-catch, 11-target, 79-yard, one-touchdown game against the New Orleans Saints earlier this season.

Christian Kirk is looking like a strong WR3/FLEX (and a low-end WR2) this week. In five games since Zach Ertz’s role improved and in games without DeAndre Hopkins, Kirk has a 21.5% target share (equaling 8.0 targets per game in this split) with a team-leading 29.4% air yards share. The Dallas Cowboys rank 19th in passing average depth of target allowed and 23rd in yards per target allowed on downfield attempts. It’s a good spot for Kirk.

Over the past three games with CeeDee Lamb, Amari Cooper, and Michael Gallup all healthy, Gallup has a 16.4% target share (6.3 per game) with 1.0 downfield target and 1.0 red zone target per game while drawing a target on 17.0% of his routes. For context, Cooper is at 19.5% in that split (and Lamb is at 24.0%). He should be on the field plenty and drawing high-leverage targets this week.

Start with confidence: These guys are the Big Six this week.

In that aforementioned split for Christian Kirk’s role, Zach Ertz (again, since a role increase and without DeAndre Hopkins over five games), Ertz leads the Arizona Cardinals in target market share (23.7% for 8.8 targets per game) and has had double-digit targets in his past two games.

Though Hunter Henry has been touchdown-dependent this season, his role is a bit better lately. He played at least 81.5% of the New England Patriots’ snaps in each of the past two games, a span during which he has an 18.9% target share (7.0 per game) with a 40.0% red zone target share. The Jacksonville Jaguars are 23rd in adjusted fantasy points per target allowed to tight ends.

With Adam Thielen on injured reserve, opportunity is there for Tyler Conklin. Since Week 13 with Thielen missing time, Conklin has a 14.7% target share (4.8 per game) with a 22.2% red zone share.