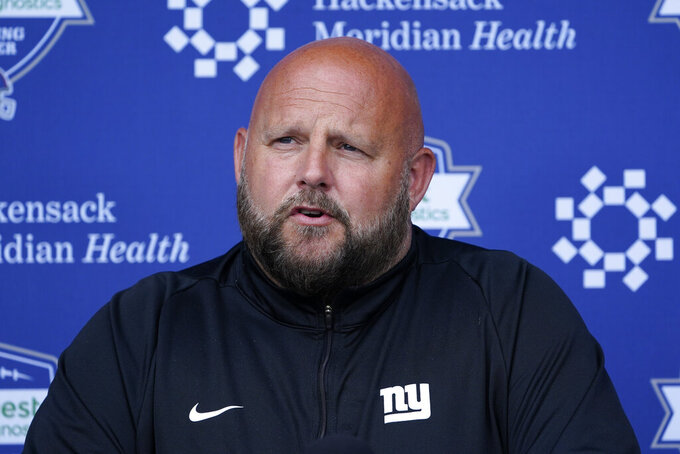 EAST RUTHERFORD, N.J. (AP) — After spending the past three seasons in Buffalo playing for him when he was an offensive coordinator, center Jon Feliciano says Brian Daboll hasn't changed as coach of the New York Giants.

Feliciano was one of the first free agents signed by the Giants after they raided Buffalo and hired Joe Schoen as their general manager and Daboll to replace Joe Judge after two seasons as coach.

Known to management and players as ‘Dabs,’ the 47-year-old Daboll was his usual down-to-earth self as the team opened a three-day mandatory minicamp Tuesday. He's a straight shooter, except discussing injuries. He wants to spread the ball around on offense, see his team play fast and have a little fun.

While mistakes happen, he doesn't mind it if a player is challenging himself to do something new and doesn't repeat the errors.

“People always ask me, especially like the first week or two — is this him?” Feliciano said of Daboll. “Yeah, same guy. This is him every dang day. You’re going to get the same thing. People were a little hesitant to believe that’s how he is all day all the time.”

Daboll faces a tough challenge in making the offense effective this season. Playing behind a decimated line last season, the unit finished 31st in the NFL, averaging 287.3 yards and 15.2 points.

It was a major reason New York finished 4-13 in 2021 and Judge and general manager Dave Gettleman were fired after the season.

For the past five months, Daboll and his players have gotten to know each other. The goal is to get the Giants back to the postseason for the first time since 2016.

“I feel very good about where we are at in terms of the spring and what we’ve got accomplished,” Daboll said. “Thrown a lot at them. The guys have come in every day with really blinders on ready to work and get better and taking it day by day."

Watching Tuesday's practice, Wink Martindale's defense seemed ahead of the offense. However, the former Baltimore Ravens coordinator used a lot of gadget defenses that caught the offense off balance.

On one play, he had safety Julian Love in a linebacker's position in the ‘A’-gap, between the center and guard.

“Let me tell you, going against Wink’s defense is going to be great for us in the long run,” Feliciano said. “But I’m not going to lie to you it does get frustrating sometimes, you know what I’m saying? Which is great, but not right now."

The Giants have gone through the offseason playing without top receivers Sterling Shepard, Kenny Golladay and Kadarius Toney. They have all had red jerseys because of a rehabilitation or a current injury.

“I think all those guys have done a great job locking in, learning the offense, and building a foundation so when they can get out there and run the reps, they’re able to go full speed,” Jones said.

Feliciano likes what he has seen from Jones, whose fifth-year option was not picked up by New York in the offseason. That makes this season a make-or-break one for the No. 6 pick in the 2019 draft.

There is no doubt Jones has talent. He lacks consistency, especially the type Bills quarterback Josh Allen has shown in recent years in making Buffalo a contender.

Feliciano says it is unfair to compare the two.

Maybe that's what Daboll is bringing to the Giants. Getting his players to be themselves so he can put them in position to be successful.

It remains to be seen.