Fields, Bears rolling on road for visit to Prescott, Cowboys 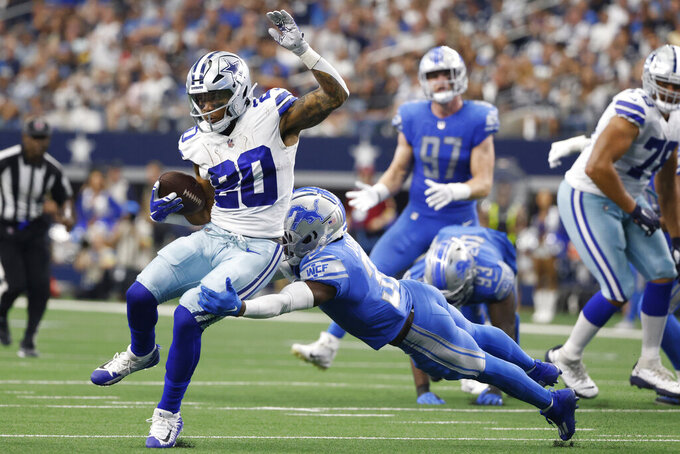 Dallas Cowboys running back Tony Pollard (20) rushes during the second half of an NFL football game against the Detroit Lions, Sunday, Oct. 23, 2022, in Arlington, Texas. (AP Photo/Ron Jenkins)

OPENING LINE: Cowboys by 10, according to FanDuel Sportsbook.

TURNOVER DIFFERENTIAL: Bears plus-1; Cowboys plus-6.

BEARS PLAYER TO WATCH: QB Justin Fields has delivered two of his best performances in the past three games. The Bears moved the pocket and used more designed runs for him against New England, resulting in the highest-scoring game for the Bears in the second-year pro's 17 starts. Fields finished 13 of 21 passing for 179 yards with a touchdown and an interception. He also had 82 of Chicago’s 243 yards rushing and ran for a score.

COWBOYS PLAYER TO WATCH: RB Tony Pollard could be the lead back for the second time in his four seasons as Ezekiel Elliott deals with a right knee sprain. Pollard had a 40-yard touchdown among two TD runs when Elliott was sidelined by a calf injury in Week 15 two years ago. But Pollard was limited to 29 yards on his other 11 carries in a 41-33 victory over San Francisco.

KEY MATCHUP: Fields and RBs David Montgomery and Khalil Herbert vs. Dallas run defense. Montgomery and Herbert had 62 yards apiece against New England in the third 200-yard game of the season for the NFL's No. 1 rushing offense (243 yards). The Cowboys traded for 340-pound Las Vegas DT Johnathan Hankins this week in an effort to bolster a run defense that appears to be the closest thing to a weakness for a dynamic unit.

KEY INJURIES: Elliott was sidelined in practice to start the week after a hard hit on his right knee against the Lions. He played in the second half, scoring twice on 1-yard runs. But he acknowledged after the game the knee was an issue. The 2020 game against the 49ers is the only one Elliott has missed because of injury in his career. ... Cowboys CB Jourdan Lewis was placed on injured reserve and will miss the rest of the season after breaking his right foot against Detroit. ... WR Noah Brown (foot) and S Malik Hooker (hamstring) missed the first practice of the week. ... Bears C Lucas Patrick is headed to injured reserve after leaving Monday’s game because of a toe injury, leaving the Bears without another starting lineman. LG Cody Whitehair (knee) was already on injured reserve. ... Chicago opened a 21-day evaluation window on WR Byron Pringle (calf) on Wednesday to determine if he will return from IR.

SERIES NOTES: First-year Bears coach Matt Eberflus visits the Cowboys for the first time since leaving in 2017 after seven seasons as a defensive assistant. He spent the past four years as defensive coordinator for Indianapolis. The Colts shut out the Cowboys 23-0 at Indy his first season there. ... Eberflus was on the Dallas staff in 2016 when QB Dak Prescott and Elliott got their first home victory in a remarkable rookie season together. The 31-17 win was the second of 11 in a row for the Cowboys.

STATS AND STUFF: Cowboys LB Micah Parsons had a sack added to his total this week in a scoring change, giving him sole possession of second in the NFL with eight. He has four two-sack games. Parsons needs one multi-sack game in the next two for eight in his first 25 games, which would be the most in the NFL since sacks became an official stat in 1982. ... Former Bears DE Robert Quinn missed a chance to face one of his former teams when he was traded to Philadelphia on Wednesday. ... Both teams had season highs in takeaways last week. Dallas had five, all in the second half, and Chicago had four. ... Chicago's 181-yard rushing average is the club's highest through seven games since 1984 (215). ... Fields and Baltimore's Lamar Jackson are the only two QBs with two games with at least 80 yards rushing this season. ... Herbert leads qualifying NFL running backs with a per-carry average of 6.19 yards. ... Herbert/Montgomery and Elliott/Pollard are the only running back duos in the league with at least 400 scrimmage yards for each player. ... NFL tackles leader Roquan Smith had 12 tackles, a sack and an interception against New England. ... DBs Jaquan Brisker and Kyler Gordon each had his first career interception against the Patriots. ... The Cowboys' Pollard had a season-high 109 scrimmage yards (83 rushing, 26 receiving) against the Lions. ... The eight touchdowns allowed by Dallas are the fewest through seven games in club history. ... Rookie DE Sam Williams had his first two career sacks against Detroit, one of which forced a fumble.

FANTASY TIP: This could be a good time for Prescott's return to fantasy lineups, assuming most owners wanted to wait for one start after the five-week absence because of a fractured thumb. Since 2020, Prescott has averaged 280 yards passing per game in 13 home games, accounting for 33 touchdowns (29 passing, four rushing) with just five interceptions. He threw for 334 yards in his previous meeting with the Bears, but they do have the third-ranked pass defense this season.