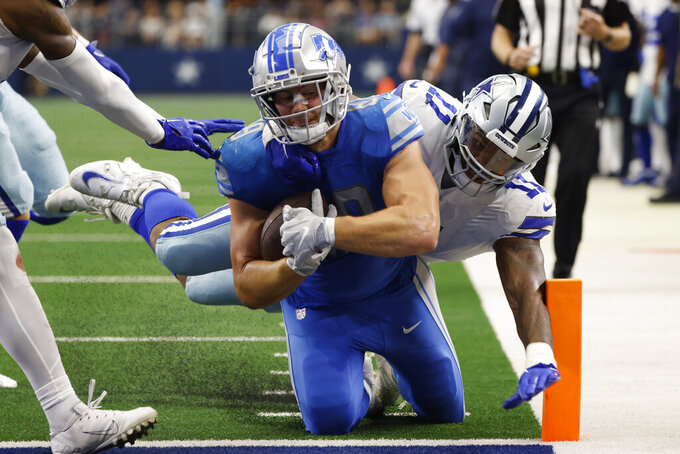 ARLINGTON, Texas (AP) — Justin Fields might be in his best groove yet in his second season as Chicago's quarterback.

Dak Prescott is trying to find his next one with the Dallas Cowboys in his second game back after missing five with a fractured right thumb.

The Bears face another tough road game against the Cowboys on a short week after winning in New England for the first time in franchise history.

Fields has a shot at his first back-to-back road victories Sunday after arguably his most complete performance during Monday night's 33-14 win over the Patriots.

“It doesn’t really change my confidence,” Fields said. “I just hope it gives us momentum to keep going, keep pushing.”

Fields had 82 of Chicago's 243 yards rushing with a touchdown and was 13 of 21 for 179 yards passing with a TD and an interception as the Bears (3-4) moved the pocket and used designed QB runs.

Although the former Ohio State star struggled the previous game in a loss to Washington, he had career highs in completion rate (71.4%) and passer rating (118.8) in a Week 5 loss to Minnesota.

“I think he’s clearly playing with more confidence than I recalled last year,” Cowboys coach Mike McCarthy said. “You can see he’s a very gifted athlete, can make all the throws, and I think like anything finding their sweet spot of how to play him, how he fits with the perimeter players.”

Prescott was understandably ragged early in a 24-6 victory over Detroit in his first game since breaking the thumb on his throwing hand in a season-opening loss to Tampa Bay.

But the 2016 NFL Offensive Rookie of the Year was 7-of-8 passing with a touchdown in the fourth quarter as the Cowboys (5-2) pulled away, once again leaning on one of the league's best defenses.

“I’m definitely more comfortable in just having more reps at it, more practice reps,” Prescott said. “This team can win in a lot of different ways, and I think it’s just a chance for us to show it.”

Prescott now faces the NFL's No. 2 pass defense, although the Bears gave up an important part of that group this week by sending defensive end Robert Quinn to Philadelphia, Dallas' undefeated NFC East rival.

Although the 32-year-old former Cowboy is off to a slow start with just one sack, Quinn broke Pro Football Hall of Famer Richard Dent’s franchise record with 18 1/2 sacks last year.

“I was obviously happy about it then I find out where he went and I went, ‘Uh-oh,’” McCarthy quipped. “We have a lot of respect for Robert. It’s not going to change their defense, so our approach won’t change.”

Cowboys running back Ezekiel Elliott missed both full practices after spraining his right knee on a hard hit by Detroit safety DeShon Elliott, who later was hurdled by the two-time rushing champ on another run.

The Dallas back said he could play without practicing, but there's a decent chance Tony Pollard will have the lead role for the second time in his four seasons.

The previous time was the only game Ezekiel Elliott has missed because of injury in his career when he had a calf issue late in the 2020 season.

The Bears are averaging a league-best 181 yards rushing per game. It’s the first time since 1990 they’ve held the top spot through Week 7, and their 242 attempts are also more than any other team this season.

Chicago had its third 200-yard rushing game of the season against New England, with matching 62-yard showings from Khalil Herbert and David Montgomery to go with Fields' team-leading total.

Herbert is ninth in the NFL with 464 yards rushing and leads all NFL running backs with a 6.2-yard average (Baltimore QB Lamar Jackson is the overall leader).

Standout Dallas linebacker Micah Parsons was in the same draft class with Fields and now is the reigning NFL Defensive Rookie of the Year, spearheading the team leading the NFL in sacks (29).

Parsons faces a challenge similar to what Jalen Hurts presented with the Eagles, who beat the defending NFC East champs 26-17 two weeks ago with the division lead on the line.

Parsons responded similarly this week when asked by reporters if Fields was even faster than Hurts.

“None of ’em’s faster than me, so I don’t really think that’s a problem,” Parsons said. “At the end of day, we just got to get them to the ground.”

From a mini-bye to a shortened week, the Bears had their routine knocked off track.

They were on a condensed schedule preparing for the Cowboys after having extra time to get ready for New England following a Thursday night loss to Washington.

Coach Matt Eberflus used some of that extra time to prepare for Dallas, where he was an assistant for seven seasons before spending the past four as defensive coordinator at Indianapolis.

“I always work back and look at the time,” he said. “In these short weeks, long weeks, you still have the same amount of time, but as long as you think ahead a little bit and put that time forward ... It’s important to do that, but we’ve always done that since I’ve been in pro ball.”