Finally, Ravens were a second-half team against Tampa Bay 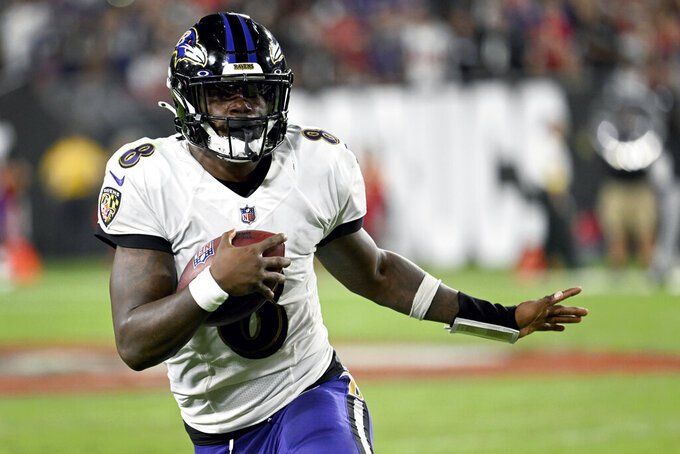 After a dismal first half offensively, the Baltimore Ravens recovered thanks to a handful of role players.

Plus Lamar Jackson, of course.

Jackson completed all eight of his pass attempts in the second half, and even though two of his top targets were limited by injuries, the Ravens stormed back to beat the Tampa Bay Buccaneers 27-22 on Thursday night.

Baltimore (5-3) has now won back-to-back games for the first time this season.

“I feel like the whole offense is hungry,” Jackson said. “Main guys went down, and everyone stepped up.”

Mark Andrews (knee, shoulder) and Rashod Bateman (foot) weren't able to play much, combining for only three catches. Instead, Baltimore relied on rookie tight end Isaiah Likely, who had six receptions for 77 yards and a touchdown. Demarcus Robinson had six catches as well, and Devin Duvernay contributed in both the passing and running game.

After running the ball only seven times in 39 offensive plays — and scoring only three points — in the first half, the Ravens revved up their rushing attack in the final two quarters. They ran for 204 yards in the second half, although leading rusher Gus Edwards is now dealing with a hamstring issue just two games after returning from a major knee injury.

After surviving this road game on a Thursday night and winning for the second time in five days, Baltimore can now look forward to playing only one game in a 23-day span.

The win was a confidence-booster for the Ravens. They've led by double digits in all eight games this season but lost three of them. This was the first time they've played substantially better in the second half than the first.

Coach John Harbaugh credited the Baltimore fans who were in attendance on this road trip.

“They were loud, they were into it the whole game, and it really helped us.” he said. “This was kind of a fight-to-the-end kind of game from an energy standpoint, in terms of not wearing down and executing when you’re tired. Trying to wear an opponent down, both teams were trying to do that, and our guys prevailed in that, and I think our fans were a big part of that.”

Although the offensive turnaround was crucial, Baltimore's defense was solid throughout. The Ravens allowed a surprisingly easy touchdown drive on Tampa Bay's first possession, then kept the Buccaneers out of the end zone until the waning seconds of the game.

Baltimore gave up 28 points in the fourth quarter of a loss to Miami in Week 2. Since then, the Ravens have not allowed more than 26 in any game.

While the Ravens showed off their depth at tight end and receiver, there's still an overall lack of healthy big-play threats, with the obvious exception of Jackson. Obviously, if the team can run the ball at will like it did in the second half, it can move the chains and score points, but the Ravens haven't had a 40-yard play in the passing game since Week 2. In four of the past five games, they haven't even had a 25-yard pass.

Baltimore recently added receiver DeSean Jackson to the practice squad, so he might be able to help in that regard.

Linebacker Justin Houston is on quite a roll at age 33. He had two more sacks to raise his season total to six.

The Ravens went for it on fourth-and-2 from the Tampa Bay 9 in the second quarter when their offense was still struggling. Jackson threw an incomplete pass. On the season, Baltimore is just 4 for 9 on fourth down — 4 for 6 on fourth-and-1 and 0 for 3 on anything longer.

Harbaugh said he did not think the injuries to Andrews and Bateman were serious, and he didn't think Edwards' injury looked too bad either.

38:23 — Baltimore's time of possession. This stat is sometimes misleading, but with both teams on a short layoff, wearing down the Tampa Bay defense seemed to have real value.

The Ravens don't play again until a Monday night matchup at New Orleans on Nov. 7. Then they have their open date, so there's a real chance for this team to heal up for the second half of the season.