Flacco passes physical, on active roster as Jets cut to 53 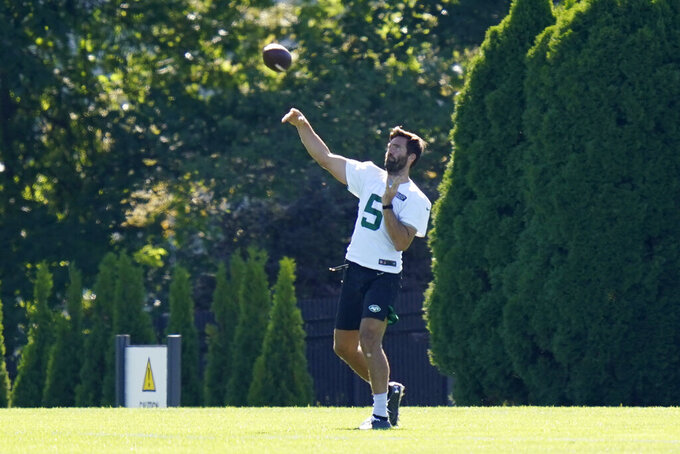 NEW YORK (AP) — Joe Flacco passed his physical and will start the season on the New York Jets' active roster as one of Sam Darnold's backups.

The veteran quarterback, who signed with the Jets in May, had been on the active/physically unable to perform list throughout training camp while recovering from neck surgery. The Jets announced Saturday that Flacco was activated among the flurry of moves the team made to get down to the 53-player roster limit.

The 35-year-old Flacco joins rookie James Morgan, a fourth-round draft pick, and Darnold at the quarterback spot. David Fales was released and Mike White waived, leaving New York without the two players who took the second-team snaps at quarterback in camp.

The Jets had three surprise cuts in center/guard Jonotthan Harrison, who started 18 games the past two seasons; linebacker James Burgess, who emerged as a starter last season after several injuries at the position; and cornerback Nate Hairston, who started six games last year.

Cornerback Bryce Hall, a fifth-round pick, was placed on the active/non-football injury list. He sat out all of camp while recovering from an ankle injury that cut short his senior season at Virginia.

Several of the players let go Saturday could be brought back, if they pass through waivers, on the practice squad. As part of the league's new rules for this season because of the coronavirus pandemic, teams can add up to 16 players — up from 10 — to their practice squad, including six veterans who had accrued any number of seasons in the NFL.