Flores making an impact in Pittsburgh as Miami return looms 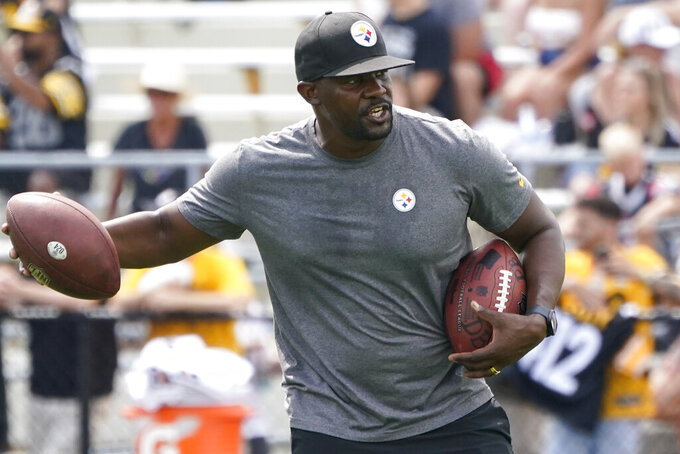 FILE - Pittsburgh Steelers senior defensive assistant Brian Flores works with the defense as they go through drills during practice at NFL football training camp in Latrobe, Pa., on Aug. 8, 2022. Flores will make his return to South Florida Sunday night, Oct. 23, 2022, when the Steelers face the Miami Dolphins. Flores was fired by the Dolphins in January and later filed a lawsuit against the NFL, the Dolphins and two other teams. (AP Photo/Keith Srakocic, File)

PITTSBURGH (AP) — Myles Jack never thought about going into coaching once his playing career is over.

Then he met Brian Flores.

There's something about the way the Pittsburgh Steelers senior defensive assistant coach carries himself that Jack, an inside linebacker who like Flores is in his first year with the team, can't shake.

Flores is demanding without being demeaning. Direct yet approachable. And fluent in things that stray far from the playing field.

“He's not a cool person like you can hang out with him cool person, but you can talk to him about stuff outside of football. So he's like the total package and coach.”

A coach who seemed to put his career at risk in February when he filed a landmark class action lawsuit in Manhattan federal court against the Miami Dolphins, the New York Giants, the Denver Broncos and the NFL, claiming the league was “rife with racism."

The 41-year-old Flores took the unprecedented step shortly after the Dolphin s fired him as head coach following three seasons in which the team went 24-25 and failed to make the playoffs.

Eight months later, Flores will return to Hard Rock Stadium on Sunday night when the Steelers (2-4) face Miami. It's a game that's been on the schedule since April, six weeks after Pittsburgh head coach Mike Tomlin — who like Flores is Black — hired Flores to work with the team's inside linebackers.

Tomlin stressed back in the spring his primary motivation wasn't to make some sort of statement of support, but to simply add a decorated and well-respected coach who earned a fistful of Super Bowl rings as a defensive assistant on Bill Belichick's staff in New England.

It's why Tomlin dismissed the idea of Flores' impending return to Miami as some sort of “revenge game.” The NFL coaching fraternity is small. Stick around long enough and eventually, you'll end up facing a team you used to work for.

Flores has made a concerted effort to keep the lawsuit and the job separate, no matter how many times his players may try to goad him into talking about the extraordinary step he's taking in hopes of creating a more level playing field for coaches of color in the future.

“He doesn’t bring it into work, even though we try to like mess with him and bring it up, he won’t like talk about it,” Jack said. “He keeps the main thing the main thing. So it's cool.”

Don't let the joking, however, fool you. Jack nodded and said “100%” when asked if he understands what's at stake for Flores in his unprecedented legal battle with a league that has spent decades grappling with the proper way to broaden the candidate pool for high-profile jobs on coaching staffs and front offices.

Not that the Steelers are particularly worried about the coach they call “Flo.”

“We tell him all the time, ‘Coach Flores, don’t forget about us when you continue in your endeavors,” Jack said. “Hopefully he's here and I'm here and we're all here forever. But you know how this business works."

Flores believes he does. It's one of the reasons he took the NFL to court.

“My sincere hope is that by standing up against systemic racism in the NFL, others will join me to ensure that positive change is made for generations to come,” he said in a statement released by his lawyers on Feb. 1, the day the lawsuit was filed.

The case remains tied up in the courts, with a judge still contemplating to let it go to arbitration as the NFL wants or proceed toward a potential jury trial as Flores, Carolina Panthers interim coach Steve Wilks and former NFL assistant Ray Horton — who joined the lawsuit in April — prefer.

Regardless of the final outcome, Flores' bold step has already made an impact. This week the NFL announced it will require key decision-makers — including owners — to participate in inclusive hiring training before starting a head coach or general manager search. That's in addition to an expansion of the “Rooney Rule" announced in March designed to further widen the group of candidates interviewed for coaching and front office positions.

Meanwhile, Flores has returned to doing what he loves: teaching the game. He's found willing pupils in Pittsburgh while working with a group that includes Jack, 2019 first-round pick Devin Bush and Rob Spillane, all of whom understand the significance of Flores returning to Miami, whether he wants to talk about it or not.

“We take (facing the Dolphins), as a unit, kind of personally,” Spillane said. “We want to make him proud.”

Perhaps just as importantly, they want to force Flores' hand when he puts together his weekly report card. The standard to earn an ‘A’ — a rarity — is easy to understand if difficult to put into practice.

To prove his point, Bush pointed out he did not earn a “plus” for swatting away a potential game-tying 2-point conversion attempt by Tom Brady in the fourth quarter of last week's upset over Tampa Bay.

“(Because) you're supposed to do that,” Bush said.

Yet Flores is a teacher with a conscience. When he goes through the video, he allows his players to offer a defense for why they made certain choices during a given play. It feels less like a quiz and more like an exchange of ideas.

“We are able to speak our minds and tell him how we feel about certain things,” Spillane said. “I love being able to work with a guy like that."