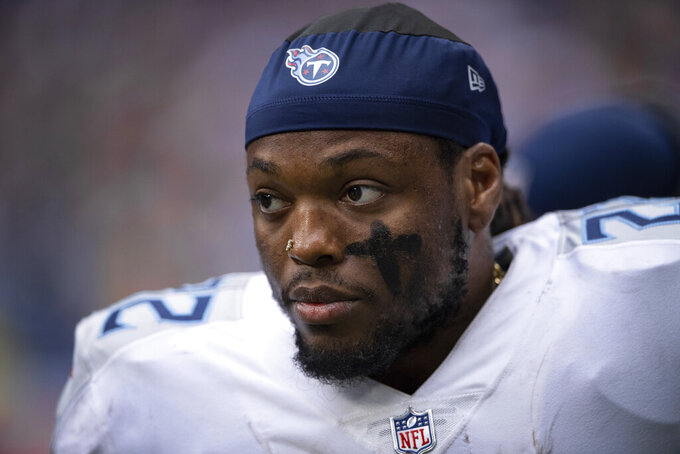 FILE - Tennessee Titans running back Derrick Henry (22) is shown on the sidelines during an NFL football game against the Indianapolis Colts, Sunday, Oct. 31, 2021, in Indianapolis. It’s been nearly 12 weeks since Derrick Henry broke his right foot. The 2020 AP NFL Offensive Player of the Year has been practicing while still on injured reserve with the Tennessee Titans targeting his return Saturday for their divisional game with Cincinnati. (AP Photo/Zach Bolinger, File)

NASHVILLE, Tenn. (AP) — Derrick Henry, the man who literally ran the Tennessee Titans to the AFC championship game two years ago, is ready to play again.

The 2020 AP NFL Offensive Player of the Year says his surgically repaired right foot, fixed with a steel plate, feels no different than his left, and he's happy to be back on a football field.

Just in time for Saturday's divisional playoff game against Cincinnati.

As long as the Titans make the final step, moving Henry from injured reserve to the active roster by Friday afternoon. Henry talking to reporters Wednesday for the first time since breaking his foot Oct. 31 sure seems a strong indicator he will be back in time for kickoff.

So will he play Saturday?

“See how this week goes, and we’ll see where I’m at on Saturday,” Henry said.

This was the first time Henry, the 2015 Heisman Trophy winner, had ever dealt with an injury during a football season. He called it “definitely shocking," though Henry simply turned his attention to surgery and working his way back to the football field.

The injury cost him the final nine games of the season. The NFL's 2019 and 2020 rushing leader led the league again when he was injured, and Henry still finished the season ninth with 937 yards.

“It was the first time that I got injured during the season and had to miss you know the rest of the season, so it was definitely different ...,” Henry said. “Just glad that I was able to get through it and had my support system and happy to be back.”

Henry said he appreciates everyone who helped him get to this point. The Titans (12-5) started the 21-day window for Henry to practice with the team Jan. 5, and they also gave him an extra week to work himself closer to game shape by earning the AFC's first-round bye as the No. 1 seed.

Henry says the only difference now between his left and right foot is the steel plate that remains in his right foot. Asked about rust from being out, Henry says he's doing everything he can to be ready for kickoff with the work on the practice field.

The Titans running back will be monitored when he does return, a big difference for someone used to a heavy workload. He had 303 carries in the 2019 regular season with 83 more in three playoff games, and he followed with 378 rushes in 2020.

A lot of wear and tear on a body. To Henry, his injury is just a football issue.

“Injuries happen,” Henry said. “And you just got to keep pushing forward and everything happens for a reason. You know, I don’t try to get into all the what ifs and this and that that and this, just on focus on the right now and appreciate the journey. And that’s all I can do.”

The Titans practiced in shoulder pads Tuesday, and linebacker Jayon Brown and defensive lineman Larrell Murchison came over during a couple individual drills to give Henry a couple of defenders to thud up against and run through.

The 6-foot-3, 247-pound Henry said it's all part of what he's had to work to overcome. He thanked the Titans' trainers, his girlfriend driving him to the team headquarters for physical therapy for the five weeks he couldn't drive, teammates who stayed in constant touch and fans who wrote him letters.

During his recovery, Henry says he was the Titans' biggest fan. The Titans didn't change how they played, replacing Henry with D'Onta Foreman and Dontrell Hilliard. Tennessee finished the regular season ranked fifth in the NFL in rushing.

But Henry has averaged 111.7 yards over six playoff games for his career. Henry is the man who turned in 2,027 yards rushing in 2020, the fifth-highest total in NFL history. He also ran for a team-high 10 touchdowns in just eight games.

The Bengals ranked fifth defending the run this season. They know Henry takes his biggest toll on defenses in the fourth quarter, and Cincinnati defensive tackle D.J. Reader said tackling is the key.

A bigger person with fresh legs too.

“I would think anybody who hasn’t played in two months feels pretty good about their body,” Henry said.