On Football: Looking toward April and the NFL draft 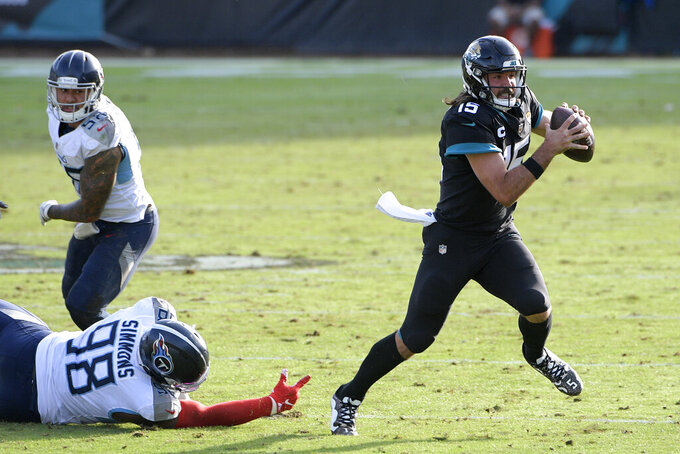 It sure seems like in the NFL it's all about the quarterbacks. Not only do they tend to drive success on the field, but they also can be the major reasons for failure.

Just ask the jokes that are the Jets and Jaguars, whose tepid race for the No. 1 overall draft pick is about as engrossing as the work of Blake Bortles and Sam Darnold in recent years.

Still, as we eventually move through the doldrums of winter toward rebirth in the spring — the draft is set for late April in Cleveland — what's left of the fan bases in the Big Apple and the First Coast will believe every word they hear about Trevor Lawrence and Justin Fields.

Of course, those standout college quarterbacks will have the final say on whether they wind up in either place, because both have college eligibility remaining. Might the daunting prospect of heading to such dire situations in the pros make Clemson look exceptionally enticing for another year for Lawrence? Ditto Ohio State for Fields?

It has happened before, sort of. Although there were other factors, Peyton Manning remained at Tennessee for his senior season in 1997, eschewing a chance to join — you guessed it — the J-E-T-S, who had gone 1-15 and owned the top overall selection.

More likely, particularly because of the money involved, but also because they aren't likely to shy away from challenges, Lawrence and Fields (or Fields and Lawrence) will go 1-2 in the draft. These are desperate times for the Jets and Jags, who recognize that two teams in their divisions are on impressive upward spikes: Buffalo and Miami in the AFC East, Tennessee and Indianapolis in the AFC South.

Both the Jets and Jaguars have missed on QBs far too often recently — Mark Sanchez, Geno Smith and Darnold in New York; Bortles and Nick Foles in Jacksonville — but have little choice but to try once more.

The general belief is that Lawrence, who has won a national title and pretty much has handled the spotlight and pressure at Clemson with aplomb, is the top prospect.

In his most recent rankings, ESPN's Mel Kiper says so.

“He makes it look easy,” Kiper writes. “Lawrence has everything NFL teams want in a starting quarterback, from size to arm talent to the ability to process reads and make the right throw.”

“Lawrence is the best quarterback prospect I’ve seen come out of college since Andrew Luck was drafted by the Colts in 2012. Lawrence’s intangibles are high end, and I love his huge arm and the mobility he brings at his size. He’ll need a little refining with his pocket presence, and his footwork is still progressing, but this kid is the real deal.”

Yes, that is swooning occurring at the training facilities of the Jets and Jaguars.

Fields, though, isn't a bad consolation prize, according to most draft analysts.

"More than a dual-threat quarterback, he is comfortable picking apart defenses with precision or dialing up deep passes," notes Michael Middlehurst-Schwartz of USA Today. “Fields is an outstanding starting point for an organization seemingly facing an imminent reset.”

Jacksonville has little to no baggage when it comes to adding a quarterback. Foles is gone to Chicago, Gardner Minshew has the look of a career backup, though with a good upside, and recent starter Mike Glennon is a journeyman.

Things are not so simple in New York/New Jersey. Darnold was the third overall draft pick in 2018, then Adam Gase was hired to nurture him to stardom. Instead, Darnold has proven only one thing: He is injury prone. And Gase appears on the way to an 0-16 season and then out the Florham Park door.

There is little market for an unproven and often banged up Darnold, and he might be too young at 23 to give up on completely. But would that create an uncomfortable situation in the quarterback room with Lawrence or Fields on board?

Beyond those two bottom-enders, no other teams in the quarterback market are likely to be picking very high. But Detroit, Chicago, Atlanta, San Francisco and New England could be in the mix. Later on, Pittsburgh, Indianapolis and even Tampa Bay and New Orleans might address the QB question.

As for the other exceptional prospects for the 2021 grab bag, consider these guys:

The upcoming draft will be tricky because of the number of collegians who opted out because of the COVID-19 pandemic, plus the many players whose teams didn't get on the field too much. Regardless, barring a major injury — or wanting to avoid the Jets and Jaguars — look for Lawrence and Fields atop the April draft. Or Fields and Lawrence.