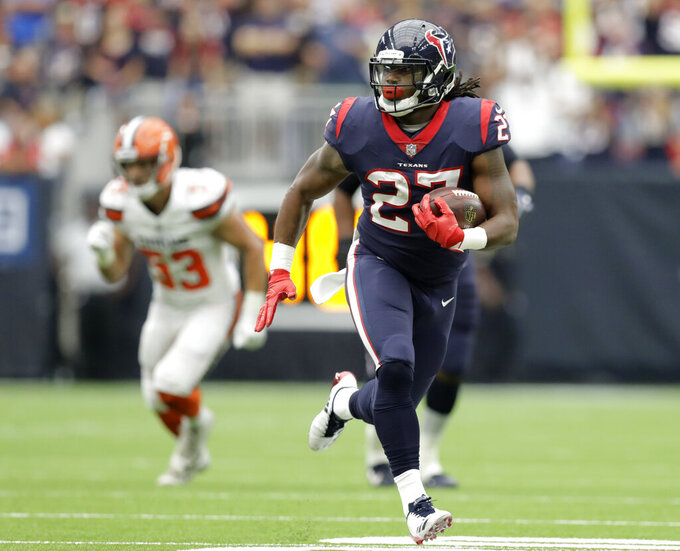 FILE - In this Sunday, Oct. 15, 2017 file photo, Houston Texans running back D'Onta Foreman (27) breaks out for a long run against the Cleveland Browns in the first half of an NFL football game in Houston. Two days after being cut by the Texans, the third-year running back made it onto the field in suburban Indianapolis eager to prove he can still play in the NFL. (AP Photo/Eric Gay, File)

The Houston Texans told him as much Sunday, and the Indianapolis Colts figure it can't hurt to take a look.

Two days after the former college star was cut by the Texans, Foreman was back on the field in suburban Indianapolis eager to prove the doubters wrong.

"It's a humbling experience to be here, being cut by your hometown team," Foreman said Tuesday after being claimed off waivers. "I'm just, I'm here to work."

Apparently, that was one of the criticisms in Houston.

Media reports suggested Texans coaches had grown weary of Foreman's work habits, his pass protection and his punctuality. He also fumbled during his final practice with Houston on Saturday.

When asked what went wrong in Houston, Foreman declined to push back against those suggestions and instead told reporters he didn't "want to say the wrong thing."

To make the Colts' roster, Foreman must show those perceptions are fiction. Indy already has an established starter in Marlon Mack, two promising second-year backs in Nyheim Hines and Jordan Wilkins and Jonathan Williams, who finished last season with the Colts and like Foreman was a prep star in Texas. They also have veteran Spencer Ware on the physically unable to perform list.

And the Colts spent most of last season with only three running backs active on game day.

Still, they decided to give the 23-year-old a shot.

"We'll bring him in here and take a look," coach Frank Reich said. "He's like everybody else, we're all day to day. You've got to prove it every day, so I look forward to getting him in here and seeing what he's all about. It will be a good opportunity for him."

Reich said Foreman would only play in Thursday's preseason opener at Buffalo in the "right situation."

But Foreman does have an intriguing resume and plenty of potential.

The Houston Texans thought highly enough of the 2016 Doak Walker Award winner, which goes to the top running back in college football, to make him a third-round draft pick in 2017.

After a solid start to his rookie season, Foreman tore the Achilles tendon in his left leg in mid-November. He never really rebounded.

Foreman started last season on the physically unable to perform list, wasn't activated until early December and carried seven times for minus-1 yard in his only game. This summer, coach Bill O'Brien appeared to give Foreman a clean slate at the start of training camp, but his tone changed dramatically as camp continued.

On Sunday, O'Brien delivered the news to the former University of Texas star before the Texans left for joint practices with Green Bay.

"I didn't expect to be released from Houston at all, like everything has happened so fast," Foreman said. "I believe everything happens for a reason and I'm here to make the most of my opportunity."

Foreman also has had some struggles off the field.

His infant son, D'Onta Jr., died from an intestinal infection just seven weeks after he was born prematurely in the fall of 2016. Since then, he has welcomed a daughter, Nike, become active in the March of Dimes and started a charitable foundation urging fathers to become more involved in their children's lives.

University of Texas police also arrested Foreman in July 2017 for unlawful carrying of a weapon and marijuana possession, both misdemeanors. He eventually pleaded no contest on a single misdemeanor count of disorderly conduct for making unreasonable noise, which was later dismissed.

Now, in a new home, Foreman thinks he can be a perfect fit.

"I've never played outside of Texas, never played on a team more than three hours away from my hometown," he said. "So me being away is definitely different, definitely a different vibe from Houston, but it's probably one of the best things that's happened to me. I've had a lot of family members around, a lot of friends around, me just being able to get away and focus mainly on football, I think this is definitely a good spot for me."