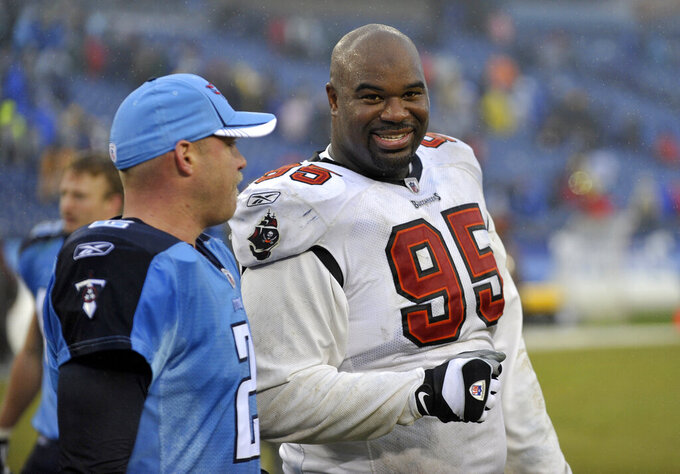 FILE - In this Sunday, Nov. 27, 2011 file photo, Tampa Bay Buccaneers defensive tackle Albert Haynesworth (95) talks with former teammate Tennessee Titans kicker Rob Bironas (2) after an NFL football game in Nashville, Tenn. Former Tennessee Titans All-Pro defenseman Albert Haynesworth says on social media that he needs a kidney transplant. He shared a photo of himself in a hospital bed and wrote that his kidney failed him on Sunday, July 7, 2019 and he’s looking for a donor.(AP Photo/Joe Howell, File)

The 38-year-old Haynesworth posted on Instagram that he's been battling kidney disease for a few years. He shared a photo of himself in a hospital bed and wrote that his kidneys failed him Sunday and he's looking for a donor.

"It's hard to believe from being a professional athlete to only 8 (seasons into) retirement that my body has taken another major blow," Haynesworth said in the post.

Haynesworth added that he's "in dire need of a kidney."

Haynesworth played 10 seasons in the NFL. He spent his first seven seasons with the Titans, who selected him No. 15 overall in the 2002 draft out of the University of Tennessee. Haynesworth also played for Washington (2009-10), New England (2011) and Tampa Bay (2011).

Haynesworth had his greatest season in 2008, when he had 8½ sacks while leading the Titans to a 13-3 record and the No. 1 overall seed in the AFC before they lost to the Baltimore Ravens in the divisional playoffs.

This isn't the first health problem Haynesworth has faced since leaving the NFL.

Haynesworth told a Nashville radio station in 2016 that he dealt with a brain aneurysm in November 2014 that caused him to spend time in intensive care. Haynesworth referenced that issue in his Instagram post.