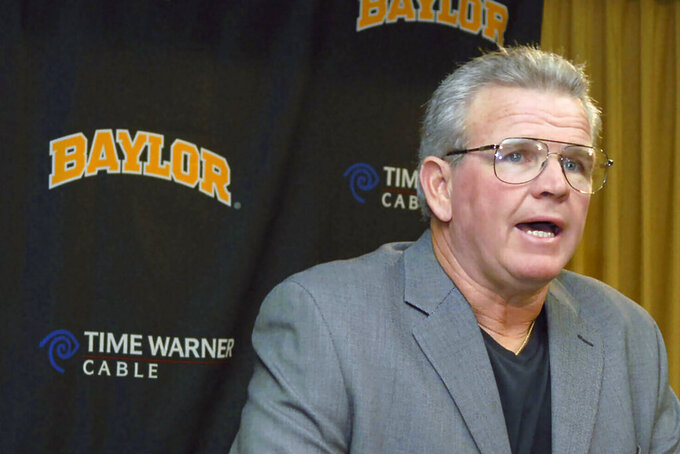 FILE - Baylor football coach Guy Morriss reads a short statement after it was announced by school officials, Sunday, Nov. 18, 2007, in Waco, Texas, that he would not return as head coach. Guy Morriss, a 15-year NFL offensive lineman who started Super Bowl XV for the Philadelphia Eagles before coaching collegiately at Baylor and Kentucky, has died. He was 71. Kentucky athletics spokesman Tony Neely confirmed Morriss’ death on Tuesday, Sept. 6, 2022, after being informed by his family. (Rod Aydelotte/Waco Tribune-Herald via AP, File)

LEXINGTON, Ky. (AP) — Guy Morriss, a 15-year NFL offensive lineman who played in Super Bowls with Philadelphia and New England before coaching collegiately at Baylor and Kentucky, has died. He was 71.

Kentucky announced that Morriss died Monday in Danville, Kentucky. Athletics spokesman Tony Neely confirmed the school was informed by his family. No cause of death was specified in a release, though Morriss was diagnosed with Alzheimer’s disease in 2017.

Morriss played with the Eagles from 1973-83 after being drafted in the second round and started at center in their 27-10 Super Bowl loss to the Oakland Raiders in 1981. He also spent four seasons with the Patriots and played in 217 NFL contests, including Super Bowl XX, with 177 starts.

Eagles quarterback Ron Jaworski mourned his ex-teammate on social media and said, “So sad to hear my great center Guy Moriss has passed away. Guy was a true leader on our Super Bowl team. RIP my friend!”

Morriss began his head coaching career at Kentucky following the resignation of Hal Mumme after the 2000 season amid an NCAA investigation of rules violations. The former offensive line and assistant head coach under Mumme went 2-9 in 2001.

The Wildcats improved to 7-5 the next year for Morriss’ lone winning finish, a turnaround season highlighted by a near upset of LSU. Kentucky was banned from the postseason as part of NCAA sanctions.

Kentucky athletic director Mitch Barnhart expressed condolences to Morriss' family and friends in a release and said he stabilized the football program during a period of significant uncertainty.

“He was both liked and respected by the players, who responded to his fair, no-nonsense approach with their best efforts," the AD added. “His six years at UK feature some of the best players and most exciting moments in our history.”

The Texas native played at TCU and later coached high school football in Kentucky before retiring.

Morriss is survived by his wife, Jackie; their daughters, Colleen, Kerry, Savannah and Austin; and five grandchildren.