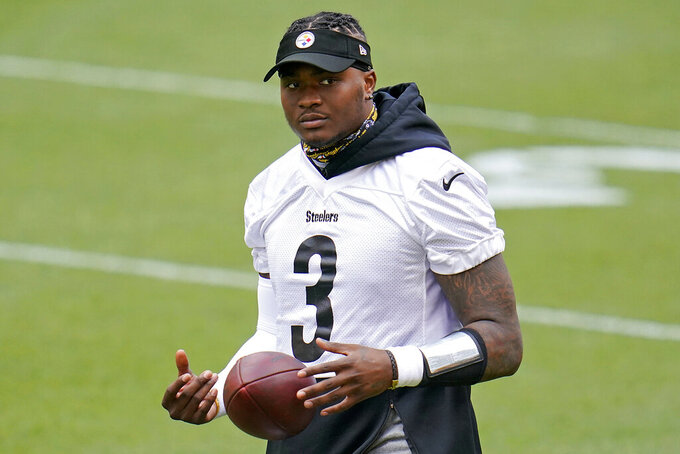 FILE - Pittsburgh Steelers quarterback Dwayne Haskins works during the team's NFL minicamp football practice in Pittsburgh, Tuesday, June 15, 2021. The wife of Pittsburgh Steelers quarterback Dwayne Haskins called Florida 911 dispatchers shortly after he was fatally struck by a dump truck earlier this month, saying his car had run out of gas and she was worried because he wasn't answering the phone, according to recordings released Wednesday, April 20, 2022. (AP Photo/Gene J. Puskar, File)

PITTSBURGH (AP) — Former teammates and coaches bid farewell to Dwayne Haskins during an emotional memorial service on Friday, a little less than two weeks after the 24-year-old quarterback died after being struck while walking on a South Florida highway.

Tomlin, Haskins' wife, Kalabrya, former NFL teammate Steven Sims, Haskins' agent, Cedric Saunders, and longtime friends Mohamed Jabbie and Mykel Traylor-Bennett spoke during the service, which was closed to media outlets. Attendees were handed yellow roses after walking out the front of the church and three doves were released in tribute to Haskins.

The service is the first of three to honor the former Ohio State star and 2019 first-round pick of the Washington Commanders. Haskins joined the Steelers in January 2021 after being let go by Washington and signed a one-year contract to stay in Pittsburgh in March.

A memorial service is scheduled for Saturday in Rockaway Township, New Jersey, near where Haskins was born. The Bullis School in Potomac, Maryland, where Haskins played in high school before signing with Ohio State, is slated for one for Sunday evening.