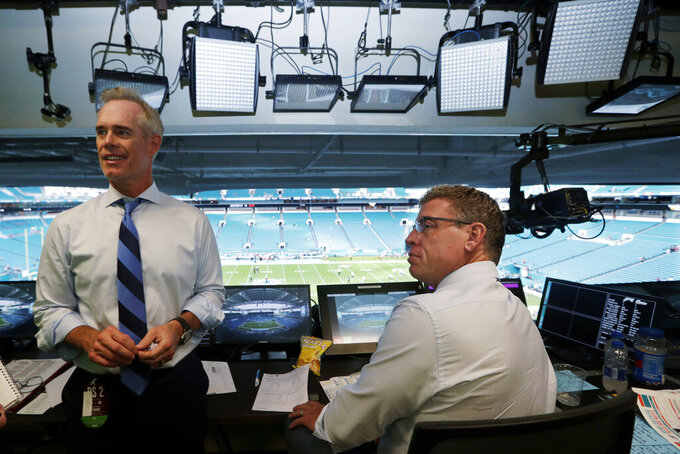 FILE - Fox Sports play-by-play announcer Joe Buck, left, and analyst Troy Aikman work in the broadcast booth before a preseason NFL football game between the Miami Dolphins and Jacksonville Jaguars in Miami Gardens, Fla., Aug. 22, 2019. On Monday, May 16, 2022, Buck and Aikman made their first trips to ESPN headquarters in Bristol, Connecticut, to meet with executives and their future co-workers as preparations for the upcoming season began to ramp up. (AP Photo/Lynne Sladky, File)

LOS ANGELES (AP) — At least when it comes to its top announcing crews, the NFL’s free agency is over for this year.

Fox Sports completed its lineup for the 2022 season on Tuesday by announcing Greg Olsen as its lead NFL analyst. During its upfront presentation for advertisers two weeks ago, Fox announced that Kevin Burkhardt would be the top play-by-play announcer.

The move was expected for a couple of months after Joe Buck and Troy Aikman moved to ESPN’s “Monday Night Football.”

How long Olsen will remain in the top spot remains to be seen. Tom Brady has signed with Fox and will move into the booth after he retires for good.

Fox has two of the next three Super Bowls, including the game in Phoenix at the end of the 2022 season.

Fox Sports president of production/operations and executive producer Brad Zager said that the past couple of months has been stressful but rewarding.

“There have been a lot of dominoes out there. You just tried to focus on the people and making sure that everybody was happy at the end of all these moving pieces,” Zager said in a phone interview with The Associated Press.

“I don’t want to speak for anybody else. But you know, we’re excited for the future after all this and knowing that we’re set up for a long time. But it’s a lot of different emotions as you go through something like that.”

Olsen has worked for Fox since 2017 and did some game, and studio analyst work while still playing. Olsen and Burkhardt were the network’s No. 2 crew last season when Olsen retired following a 14-year NFL career.

Erin Andrews and Tom Rinaldi will return as the sideline reporters.

The team makes its regular-season debut on Sept. 11, when the Minnesota Vikings host the Green Bay Packers.

Olsen’s promotion caps an unprecedented offseason of announcer transactions. In March, Buck and Aikman had the most significant move to ESPN after being Fox’s No. 1 team since 2002.

Buck said two weeks ago during an ESPN teleconference that he has been as surprised as everyone else with the movement.

“Somebody said to me the other day that we as fans need a sportsperson to tell us where all these sports announcers are ending up because everybody has shifted and moved places,” he said.

“My dad (Hall of Fame announcer Jack Buck) passed away 20 years ago. I think he’d be stunned if he walked out of the grave right now and said, ‘Wow, that’s what’s going on in this business?’ Nobody saw that coming.

“It’s been kind of crazy. It’s been exciting on this end of the business.”

Al Michaels, who had been on NBC’s “Sunday Night Football” since 2006, started the movement by signing with Amazon. He will team up with Kirk Herbstreit on Prime Video’s inaugural season of “Thursday Night Football.”

Many thought Michaels and Aikman would be working together at Amazon until ESPN got its dream booth with Buck and Aikman.

In a phone interview with The Associated Press last month, Tirico said he was stunned at first over the attention devoted to the announcer moves. However, with the longevity of most booths and networks devoting an average of $10.27 billion per year in rights fees when the new television contracts begin in 2023, the lead voice on NFL packages is significant.

“It’s the power of the NFL. With Sunday afternoons, Sunday nights, Monday nights, and now Thursdays, people have that as part of their routine. And by extension, we as announcers become part of that routine,” he said. “So, I think that’s a natural reason for this becoming such big news and why some change and upheaval becomes part of the story.

“Obviously, Joe and Troy still working together is going to be natural, but hearing them on Monday nights instead of Sunday afternoons will be a little bit different. I just think having our habits changed a little bit is multiplied by the power and visibility of the NFL, which is different than any other entertainment entity out there right now.”

The only booth that hasn’t changed is CBS. Jim Nantz and Tony Romo will be in their seventh year together when the season kicks off in September.