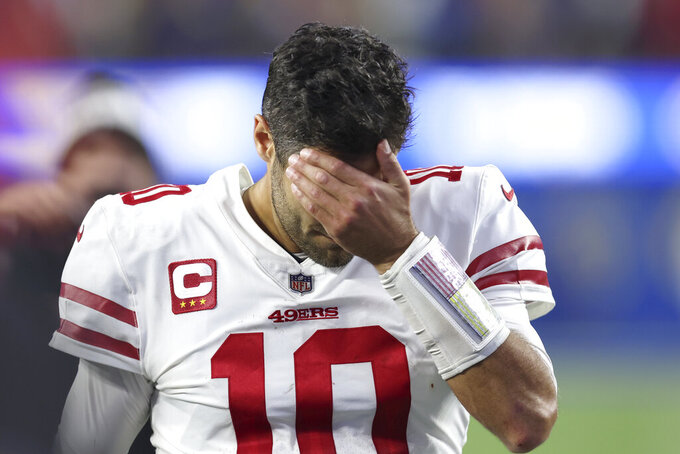 SANTA CLARA, Calif. (AP) — Before Jimmy Garoppolo finished his 17-minute season-ending news conference, he wanted to deliver a message to the San Francisco 49ers fans who supported him the past five seasons.

“It’s been crazy, man. Just all the comebacks at Levi’s, comebacks on the road, ups and downs. It’s been a hell of a ride guys,” he said. "I love you guys.”

While Garoppolo's tenure as quarterback for the 49ers isn't officially over as he has one year remaining on his contract and coach Kyle Shanahan and general manager John Lynch said no final decision has been made, all signs point to a trade being made in the coming months and San Francisco turning the team over to Trey Lance.

Lynch and Shanahan talked to Garoppolo on Monday after the Niners began their offseason following the 20-17 loss to the Rams in the NFC title game and promised to keep an open line of communication.

“When you have a quarterback who played like Jimmy did last year, we have a young guy waiting to eventually get an opportunity,” Shanahan said. “There’s a lot of good options there and that’s why all cards are on the table. It’s cool that we’re in a place where all cards can be on the table, because usually they’re not in that situation.”

While the Niners aren't ruling out the possibility of Garoppolo returning, a trade remains the most logical scenario.

San Francisco gave up three first-round picks to draft Lance third overall last spring and anointed him the quarterback of the future.

The Niners kept Garoppolo for the 2021 season because they felt Lance needed time to develop after starting only 17 games in college at FCS-level North Dakota State.

Garoppolo said he appreciates Lynch's honesty with him through the process and hopes to be able to go to a contender.

The Niners acquired Garoppolo from New England for a second-round pick in 2017 after losing the first eight games of the Shanahan-Lynch regime. Garoppolo provided a late-season spark with five wins and signed a five-year, $137.5 million contract that offseason.

He dealt with injuries in 2018 and 2020 but helped San Francisco reach the Super Bowl in 2019 where they lost to the Chiefs.

Garoppolo's limitations and injuries led to the decision to trade up for Lance but Garoppolo did almost everything the Niners could have hoped for this season as he helped them reach the NFC title game.

He said the trade for Lance was difficult at times but also allowed him to focus on enjoying the season with his teammates.

Garoppolo threw for 3,810 yards and 20 TDs during the regular season and led a game-winning drive in the divisional round against Green Bay.

But he struggled overall in the playoffs while dealing with injuries to his thumb and shoulder, showing why the Niners looked for his replacement last offseason and now he heads toward an uncertain future.

“I knew this would happen eventually, but you can never be totally prepared for moments like these,” he said. "It’s just weird. You put yourself through all these things, you put yourself out there as a player, you make all these great relationships and then you know, things come to a halt. But that’s just life. You’ve got to keep moving on, keep things rolling and enjoy the moment.”

— Lynch said it would be a priority to lock up edge rusher Nick Bosa and receiver Deebo Samuel with long-term contracts this offseason. The team's top two picks from 2019 are eligible for extensions for the first time.

“We fully understand these guys are pillars of what we're trying to do here,” Lynch said.

— Shanahan said defensive coordinator DeMeco Ryans sent him a text on the team bus after the game to let him know he was pulling out of the head coaching search in Minnesota and would return for a second season as coordinator.

— Shanahan said offensive coordinator Mike McDaniel will interview for the head coaching job for the Miami Dolphins on Thursday.