Garoppolo back as starter for 49ers after offseason intrigue 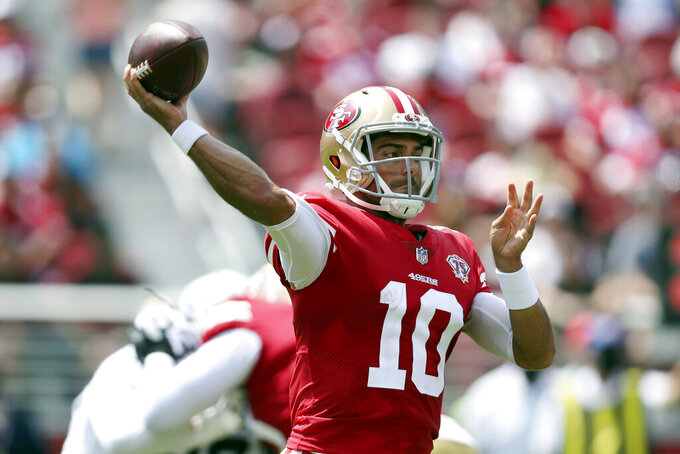 FILE - In this Sunday, Aug. 29, 2021, file photo, San Francisco 49ers quarterback Jimmy Garoppolo (10) throws a pass during an NFL preseason football game against the Las Vegas Raiders in Santa Clara, Calif. Switching personnel mid-drive is commonplace in the NFL with running backs shuttling in and out and teams switching from three-receiver sets to two-receiver formations all the time. The 49ers could do it at quarterback this season with Garoppolo and rookie Trey Lance sharing time. (AP Photo/Jed Jacobsohn, File)

SANTA CLARA, Calif. (AP) — An offseason full of quarterback intrigue and speculation in San Francisco has left the 49ers in the same spot at the beginning of the season as they have been the past three years: Jimmy Garoppolo is the starting quarterback.

While coach Kyle Shanahan is being “hardheaded” in his own words and refusing to announce a starter, it's been clear for weeks Garoppolo would begin the season in that role when the Niners visit Detroit on Sunday.

“I told you guys a long time ago, I had a pretty good feeling about it,” he said Wednesday. "Kind of joked about it, but yeah, I always kind of knew where I stood and everything. Now it’s official, I guess.”

While many outside the organization wondered if Garoppolo would still be around after the Niners traded three first-round picks to move up to No. 3 in the draft, where they took quarterback of the future Trey Lance, Shanahan and general manager John Lynch remained adamant Garoppolo was the starter.

They delivered the message to Garoppolo as soon as they made the trade and never wavered, deciding it was worth paying Garoppolo about $25 million to ensure they had at least one viable starting quarterback.

“Obviously it’s a weird situation in and of itself,” Garoppolo said. "But just throughout all of it, try to stay focused on myself and focused on getting this team better and putting us in the right position.”

Shanahan said Garoppolo has shown more command than ever with the offense and is in a good spot heading into the season with perhaps the most dynamic group of playmakers he has had, led by tight end George Kittle, receivers Brandon Aiyuk and Deebo Samuel, and running back Raheem Mostert.

“Jimmy has had as sharp of an offseason as he’s had since I’ve been around him,” Shanahan said. "I feel that, he feels that, I think our team feels that. I feel he’s in as good of a spot as he has been going into a season.”

Even though Garoppolo is starting in Week 1, his days are numbered in San Francisco as Lance likely will take over the job either later this year or possibly next.

The Niners have had great success when Garoppolo has been available, going 22-8 in his 30 regular-season starts since being acquired in 2017 from New England. He helped San Francisco reach the Super Bowl in the 2019 season but showed his limitations in the fourth quarter of that loss to Kansas City.

San Francisco is just 7-27 with all other quarterbacks since Shanahan arrived in 2017, including going 3-7 last season when Garoppolo was sidelined by a pair of ankle injuries.

With a talented roster capable of contending with good quarterback play, the Niners weren’t willing to take that chance again and made the aggressive move for the untested Lance.

Shanahan said it was never a competition in camp because Garoppolo always was in the No. 1 spot.

“I always said that when one guy we think gives us a better chance to win, we’ll never hesitate to make that decision,” he said. "When you look at a rookie quarterback, I don’t think anything has been consistent. I think it’s been up and down, some good, some bad. And it’s also kind of exactly what you expect, too.”

The Niners still could use Lance on Sunday in a situational role. He was limited in practice by a chip fracture in his right index finger but was able to take snaps and throw the ball in practice for the first time since getting injured in the exhibition finale Aug. 29.

His status for the game will depend on how he progresses throughout the week.