Garoppolo has no good, very bad practice day for 49ers 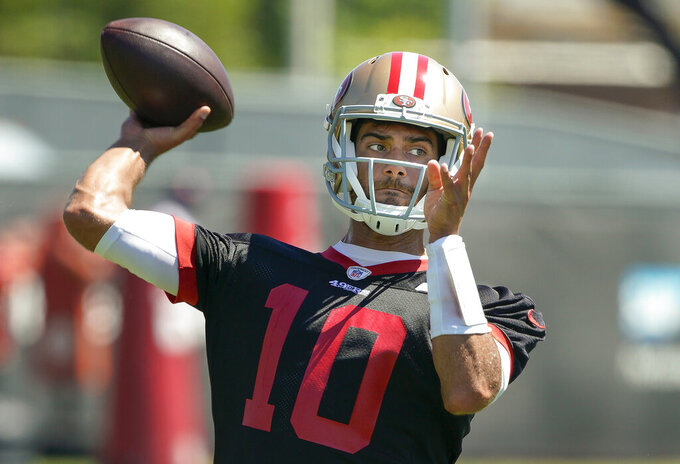 FILE - In this Tuesday, June 10, 2019 file photo, San Francisco 49ers quarterback Jimmy Garoppolo throws a pass during a drill at the team's NFL football training facility in Santa Clara, Calif. Jimmy Garoppolo had a practice to forget in his final session before facing an opposing defense for the first time since suffering a season-ending knee injury last September. Garoppolo threw interceptions on five straight pass attempts at practice for the San Francisco 49ers on Wednesday, Aug. 14, 2019 in by far his worst session in his return from the torn ACL that cut short his 2018 season after three games.(AP Photo/Tony Avelar, File)

SANTA CLARA, Calif. (AP) — Jimmy Garoppolo had a practice to forget in his final session before facing an opposing defense for the first time since suffering a season-ending knee injury in September.

Garoppolo threw interceptions on five straight pass attempts at practice for the San Francisco 49ers on Wednesday, by far his worst session since his return from the torn ACL that cut short his 2018 season after three games.

"I was the defensive coach today so I was pumped," coach Kyle Shanahan said. "The defense did great today. Obviously, he struggled. You hope to never have a day like that. But I don't think it's never not happened to anyone. When you do that, you hope you can practice long enough and you have a chance to play out of it."

Garoppolo's day went off the rails when safety Jaquiski Tartt intercepted a pass that was tipped by linebacker Kwon Alexander. Free safety Tarvarius Moore added two more interceptions, cornerback Richard Sherman jumped in front of tight end Ross Dwelley for one of his own and cornerback Ahkello Witherspoon had one in the end zone on an attempt to Dante Pettis.

Garoppolo settled down a bit after that and did lead a two-minute drill into the red zone before Tartt nearly came up with another interception on the final play, only to have it go through his hands to Jordan Matthews for a completion short of the goal line.

Shanahan said he hopes a practice like this will be a learning experience for Garoppolo on how to deal with frustration when things don't go the right way in games.

"You want so badly to make it up the next play but the next play you still have to make the right decision and go with what the defense gives you," Shanahan said. "Sometimes it's hard to make the right decisions when you're fired up and competitive. Usually when you make a bad play, it makes your mind go a little bit sideways. That's why it is sometimes a good situation to put guys in and when that does happen sometimes you try to protect them a little bit in the game. But in practice it's the exact opposite. When there's an issue, you kind of poke at it a little bit more and see how guys react."

Garoppolo will get a chance to rebound when the 49ers hold joint practices with the Denver Broncos on Friday and Saturday in preparation for an exhibition game. This will be Garoppolo's first time facing an opposing defense since injuring his knee in Kansas City last Sept. 23. He will also get a chance to play in the game on Monday night.

The one bright spot in Garoppolo's poor performance was that it showed that maybe the 49ers will have a more opportunistic defense this season after setting NFL records for futility with just two interceptions and seven takeaways all last season.

San Francisco goes into the joint practices a bit short-handed, especially on the defensive line where starting defensive ends Dee Ford and Nick Bosa remain sidelined. Ford (knee tendinitis) could return to practice next week for the first time since July 30.

Bosa had a severe ankle injury last week and his status for the season opener remains in doubt. Bosa worked out on the side Wednesday in an encouraging sign that he is making progress.

Defensive coordinator Robert Saleh said making this missed time even more crucial is the fact that the team is implementing new techniques on the defensive line under coach Kris Kocurek.

"That stuff, to me, is important," Saleh said. "Do I think it will hinder us from still being able to get after the passer? No, I don't think it will be too bad. I feel like there's going to be an adjustment. ... We're going to have a high celling once those guys get back of trying to master those techniques and master the relationship they have with one another so they can operate at a very high level."

NOTES: LT Joe Staley didn't take part in team drills with pectoral soreness. ... TE George Kittle remains day to day with tightness in his calf. ... S Jimmie Ward has been cleared to practice but will still be held out of contact after breaking his collarbone during the offseason program. ... Rookie LB Dre Greenlaw was held out of contact drills because of a stinger suffered in practice Tuesday. ... DL Jullian Taylor (back) and TE Levine Toilolo (shoulder) didn't practice.