Garoppolo uses criticism to push to 'next level' 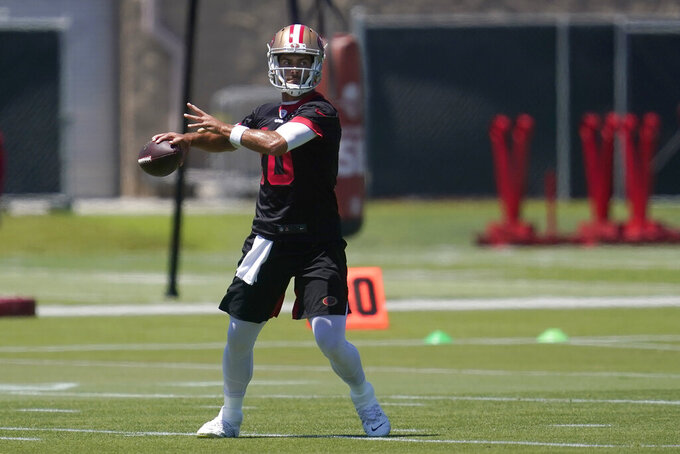 The San Francisco 49ers couldn't rely on him because of durability concerns. He lacked the mobility and playmaking ability of the top young quarterbacks in the league. The Niners needed an upgrade at QB if they wanted to be a perennial contender.

The critiques were followed by a blockbuster trade when the 49ers traded the 12th overall pick and two future first-round selections to move up to No. 3 in the draft where they took Trey Lance to be their quarterback of the future.

But for now Garoppolo is still the No. 1 quarterback for San Francisco despite those criticisms and the inevitability of a change at some point when the Niners decide to go with Lance.

"Being in the NFL for as long as I have, you kind of get used to it I guess you could say," Garoppolo said Tuesday. “It kind of comes with the job. It’s one of those things that keeps pushing you, though. When you hear those critiques and you hear those little things out there, it pushes you to take your game to the next level.”

Garoppolo acknowledged there might have been more anger than motivation when he first got word from coach Kyle Shanahan and general manager John Lynch back in March that they had made the trade and planned to draft a quarterback.

But that subsided and Garoppolo and the Niners remain linked for now as the team wants to take time for Lance to adjust to the NFL before giving him the reins. Garoppolo remains under contract with a $24.1 million salary for this season even if his days might be numbered.

“When it initially happened, there’s a million emotions that go on throughout your head,” he said. “You think of all the possible scenarios and things like that. But at the end of the day, I want to play football. I want to go out there and win games. That’s what I do. It wasn’t anything too crazy. It took a little while to get processed everything. But once I did, it was just go out there and ball.”

The Niners have had great success when Garoppolo has been available, going 22-8 in his 30 regular-season starts since being acquired in 2017 from New England. He helped San Francisco reach the Super Bowl in the 2019 season but showed his limitations in the fourth quarter of that loss to Kansas City.

San Francisco is just 7-27 with all other quarterbacks since Shanahan arrived in 2017, including going 3-7 last season when Garoppolo was sidelined by a pair of ankle injuries.

With a talented roster capable of contending with good quarterback play, the Niners weren't willing to take that chance again and made the aggressive move for the untested Lance.

Lance has started just 17 games at lower-level North Dakota State in the FCS and played just one game last season.

While the Niners offense has been efficient when Garoppolo plays, he has also struggled to protect the ball at times and lacks the game-breaking ability of the top quarterbacks.

The Niners are holding scaled-down practices with limited reps this week to give the players more time to acclimate after starting later than usual this offseason. Shanahan will slowly ramp up the intensity this spring but the limited time allowed only Garoppolo and Lance to get time in seven-on-seven and full-team drills.

Garoppolo started on one field with the starters in seven on sevens with Lance on the other. They split about 10 snaps of full-team drills with Garoppolo completing both of his passes and Lance connecting on two of three, including an impressive one on a bootleg to Brandon Aiyuk.

Shanahan said he's been impressed by Lance's intelligence and leadership and said he's done a good job adjusting everything from how to call a play to how to line up in the shotgun.

“We’re asking him to do something different and to just absorb all that in and to still handle yourself the right way. To me, that is impressive,” Shanahan said. “That’s what I’ve expected from him and haven’t been disappointed in that. That’s why I’m thankful to get OTAs and stuff because with OTAs, I’m trying not to judge too much with anybody.”

NOTES: The 49ers had more than 80 players on hand this week for the start of on-field practices. Among those missing were defensive end Nick Bosa, who is rehabilitating his injured knee in Florida and is expected to be back for training camp. Defensive end Dee Ford is recovering from a back injury and also wasn't on hand. ... Shanahan would not address rumors about the availability of Atlanta receiver Julio Jones, who was an All-Pro both seasons when Shanahan was his coordinator on the Falcons. Shanahan says he “respects” Jones as much as any player he’s ever coached.