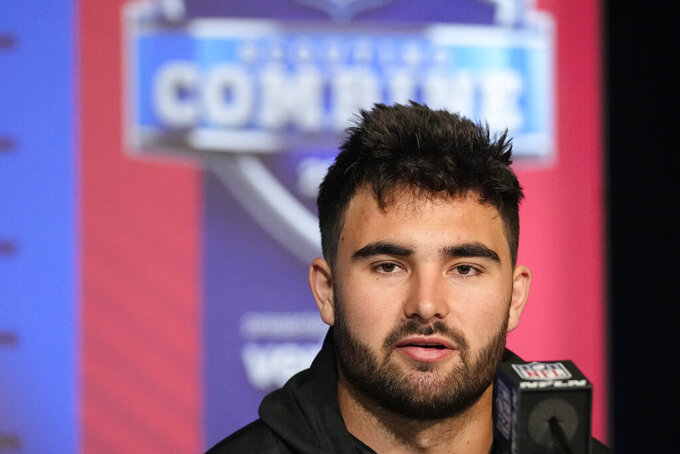 INDIANAPOLIS (AP) — The San Francisco 49ers may need to rethink their plan for Jimmy Garoppolo now that the quarterback has had surgery on his throwing shoulder.

General manager John Lynch said Wednesday at the NFL's annual scouting combine that Garoppolo initially tried to avoid surgery by rehabilitating the shoulder he hurt during a wild-card win at Dallas. He won the next week at Green Bay before losing to the eventual Super Bowl champion Los Angeles Rams in the NFC championship game.

When the shoulder didn’t heal, Garoppolo opted for surgery. Lynch said Garoppolo is expected to start throwing in late June or early July.

“Anytime you have surgery, it’s not a minor deal,” Lynch said. “Anytime it’s the throwing shoulder, I understand the significance, but it is described as a minor surgery and Jimmy is going to be fine.”

Still, the injury could make it more difficult to deal him — as the Niners seem to have planned. They intend to start Trey Lance this fall.

The trade market is wide open with two teams, Tampa Bay and Pittsburgh, trying to fill voids left by the retirements of Super Bowl-winning quarterbacks Tom Brady and Ben Roethlisberger.

Other teams could be in the mix as well. The Packers are still waiting for four-time MVP Aaron Rodgers to make a decision about his future. Denver, Indianapolis, New Orleans, Carolina and Washington all have some uncertainty at quarterback, too.

“Jimmy’s a part of us right now,” Lynch said. “A lot of people need or want quarterbacks right now and he’s obviously a guy they’d look at. So, yes, we have listened, but he’s a part of us and he’s going to work diligently to get back from this surgery.”

Garoppolo has a $24.2 million base salary for 2022 with $7.5 million guaranteed for injury. If the Niners can’t find a trade partner and wind up cutting Garoppolo to reduce their salary-cap hit, the guarantee would be offset by any money he earns this season from a new team.

The quarterbacks will hit the field Thursday at Lucas Oil Stadium to show off their arms, but Pitt’s Kenny Pickett was wishing he’d gotten to strut his hoops skills Wednesday.

At first he couldn’t recall which team had him do that. Then he remembered.

“It was the Eagles,” Howell said. “They had you shoot at a mini hoop. I only made like two out of five. So, probably not high up on their board right now.”

Pickett said he didn’t have a formal interview with the Eagles in Indy.

“Hello, world," he said softly before taking questions from reporters.

For McDaniels, this was supposed to be pretty routine by now.

In January 2018, he accepted the Colts head coaching job — only to back out after New England lost to Philadelphia in the Super Bowl. While McDaniels didn't bring up the Colts, he explained how he'd changed since being fired as Denver's coach in 2010 and why he decided to take the Raiders job.

“To me, this was an opportunity I couldn't afford to pass up," he said.

Metchie sat out the January game after tearing the anterior cruciate ligament in his left knee during December's SEC title game. The Crimson Tide's other 1,000-yard receiver, Jameson Williams, tore the ACL in his right knee during the national championship game.

“I definitely think if we were healthy for that game, things could have been different, of course," Metchie said. “But it was really tough seeing him go down, especially just having just gone down with it and knowing what that meant."

Mathis told reporters last month while he had a “ton” of respect for the Bulldogs, but wanted to remind everyone Alabama still runs the SEC.