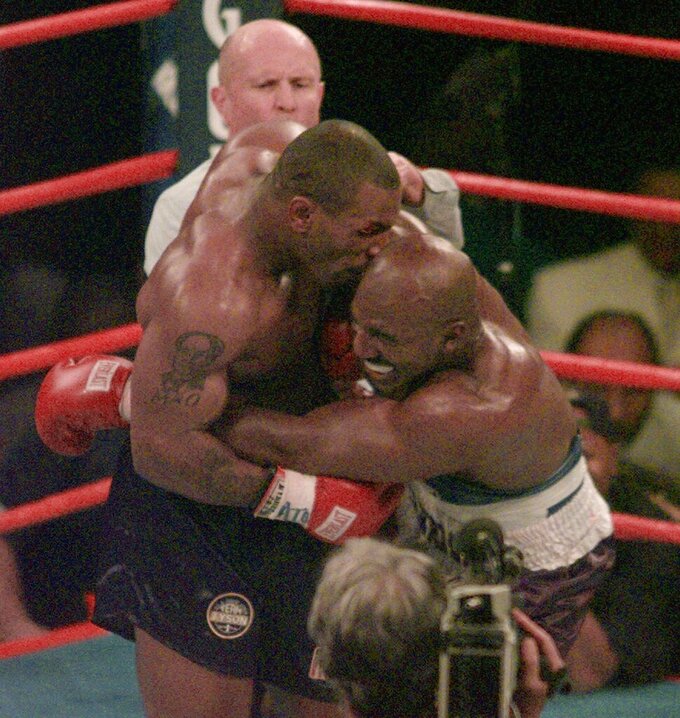 FILE - This June 28, 1997, file photo shows Mike Tyson biting into the ear of Evander Holyfield in the third round of their WBA heavyweight match in Las Vegas. Violence is part of the game in many sports. But when the Cleveland’s Myles Garrett ripped the helmet off Mason Rudolph and hit the Pittsburgh Steelers’ quarterback in the head with it, the Browns’ defender crossed a line _ one that attracts the attention of authorities sometimes from within their sport and in other cases from criminal prosecutors.(AP Photo/Jack Smith, File)

Violence is part of the game in many sports but Myles Garrett crossed a line that attracts the attention of authorities sometimes from within their sport and in other cases from criminal prosecutors.

The Cleveland Browns’ star defensive end ripped the helmet off Steelers quarterback Mason Rudolph and hit him in the head with it in front of a national television audience Thursday night.

The NFL swiftly suspended Garrett for at least the rest of the 2019 season and playoffs, the longest suspension for an on-field infraction in league history.

Garrett is not the only player to face stiff punishment. Here are some others:

Aug. 22, 1965: Juan Marichal hit John Roseboro in the head with a bat. After a high and inside pitch by the Dodgers' Sandy Koufax, Roseboro's return throw whizzed close to Marichal's ear. Roseboro, his mask still on, moved toward the Giants' Marichal, who then swung his bat and hit Roseboro on the head. The attack opened a bloody, two-inch gash. Roseboro grabbed Marichal, both benches emptied and a 15-minute scuffle ensued. Marichal was ejected and apologized the next day. Roseboro left the game at Candlestick Park with a blood-soaked towel pressed against his head and returned to the lineup three days later.

Penalty: Marichal was suspended for eight games (he missed two starts) and fined $1,750 by the National League. Roseboro later sued Marichal for $110,000 in damages. The case was settled in 1970, with Roseboro reportedly receiving $7,500.

THE BATTLE OF BOET ERASMUS

July 13, 1974: British & Irish Lions played one of the most violent rugby matches ever. Lions players adopted a "99 call," a policy where all members of the team would gather to retaliate if they felt the opposition were being too physical and trying to injure players. Lions fullback JJ Williams at one point ran halfway down the field to launch himself at Johannes van Heerden. Scuffles all over the field ensued.

Penalty: No Lions player was ejected during the tour and the visitors returned home with a 3-0 win in the test series.

Dec. 9, 1977: Rockets forward Kermit Washington punched Rudy Tomjanovich in the face during a fight at midcourt in a game between the Los Angeles Lakers and Houston. Tomjanovich ran in to try to play peacemaker. Instead, he took a hard right-hand punch from Washington that knocked him out. Tomjanovich eventually needed multiple operations to repair facial fractures. He also suffered a concussion and other serious injuries. Tomjanovich returned the next season, though was never the same player again.

Penalty: Washington was fined $10,000 and suspended at least 60 days (26 games). At the time, the suspension was the longest in NBA history.

Jan. 25, 1996: Manchester United's Eric Cantona already had a checkered record when he was ejected for a retaliatory kick at a Crystal Palace defender who had pulled his shirt. As he walked along the sideline, Cantona suddenly jumped feet-first over the advertising boards to attack Palace fan Matthew Simmons. The pair traded punches before Cantona was hauled away and escorted toward the tunnel by teammate Peter Schmeichel.

Penalty: Cantona was arrested by police and convicted of assault, although he successfully appealed a two-week jail sentence and instead completed 120 hours of community service. United suspended Cantona for the rest of the season and the Football Association extended the ban to eight months, a punishment that was made worldwide by FIFA. Cantona also lost the captaincy of the France national team over the incident and never played for his country again. The player later said he was wrong to attack Simmons but acknowledged that it had given him "a great feeling."

June 28, 1997: Mike Tyson bit Evander Holyfield's ear in the third round of their heavyweight rematch. The attack led to his disqualification from the match and suspension from boxing, and was the strangest chapter yet in the champion's roller-coaster career.

Penalty: Tyson was suspended permanently and fined $3 million. He appealed his suspension and was reinstated one year later.

April 30, 1998: Knicks coach Jeff Van Gundy, trying to play peacemaker during a brawl, grabbed Heat center Alonzo Mourning by the legs and was tossed around like a rag doll until the fight ended.

Feb. 21, 2000: Bruins enforcer Marty McSorley hit Vancouver's Donald Brashear in the head with his stick. McSorley swung his stick using both hands and hit Brashear in the head. Brashear fell backward and hit his head on the ice, was unconscious for a brief time, and had a concussion and memory lapses. He returned to play several weeks later.

Penalty: McSorley was suspended indefinitely by the NHL, missing the final 23 games of the season. On Oct. 4, 2000, a Canadian court found him guilty of assault and placed him on probation with no jail time. After the conviction, the suspension was extended to a full year, and McSorley never played in another NHL game.

April 21, 2001: Roy Keane, one of soccer's most colorful characters, was punished for a foul and then punished again. Keane launched a two-footed, knee-high challenge on Alfie Inge Haaland.

Penalty: Initially, Keane was banned for three matches. But the English Football Association charged Keane with bringing the game into disrepute in September 2002 when Keane later admitted to deliberately setting out to injure Haaland. "I'd waited almost 180 minutes for Alfie, three years if you looked at it another way," Keane said in his ghostwritten book. "I'd waited long enough. I hit him hard. The ball was there (I think). Take that." Under a ruling that the vicious tackle was "improperly motivated," in October 2002 Keane was banned for a further five games and fined a record 150,000 pounds (then $234,000).

March 2, 2004: Canucks forward Todd Bertuzzi sucker-punched the Colorado Avalanche’s Steve Moore, knocking him to the ice and breaking his neck during a game.

Penalty: Bertuzzi was suspended indefinitely four days after the incident, and missed 20 NHL games during his 17-month suspension, the final 13 regular-season games in the 2003-04 season and the Canucks' first-round playoff loss. He wasn’t allowed to play anywhere during the NHL lockout the following season.

Nov. 19, 2004: Pacers-Pistons fight spilled into the stands. The most infamous brawl in NBA history started when Indiana's Ron Artest (now Metta World Peace) fouled Detroit's Ben Wallace late in the game. Wallace shoved back, other players got involved and Artest wound up lying on the scorer's table. He put on a pair of headphones at one point, while others on the court continued a battle of mostly words for over a minute. Then a fan threw a drink on Artest, prompting him and teammate Stephen Jackson to head into the stands. "Someone started trouble," Artest said years later, "but I ended it."

July 9, 2006: Zinedine Zidane, seemingly without provocation, turned toward Italy defender Marco Materazzi and gave him a head-butt to the chest.

Penalty: FIFA banned Zidane for three matches but he had already retired. Zidane instead agreed to spend three days working with children as part of a FIFA humanitarian project. Zidane said he knocked Materazzi to the ground because he had insulted his sister. Materazzi later confirmed Zidane's version of events.

Oct. 1, 2006: Albert Haynesworth of the Tennessee Titans stomped on Dallas Cowboys center Andre Gurode's head, knocking off his helmet, then kicked and stomped his face. Gurode needed 30 stitches to repair the cuts left by the tackle's cleats.

Penalty: Haynesworth was suspended for five games without pay.