Gary Brown, former running back and coach, dies at 52 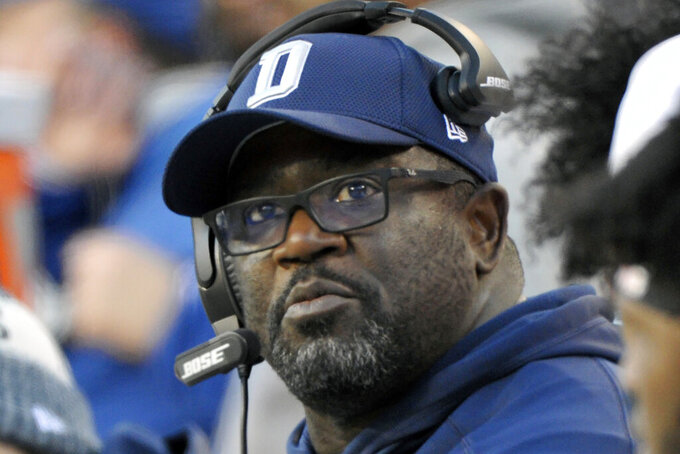 FILE - Dallas Cowboys running backs coach Gary Brown looks at the scoreboard during an NFL football game against the Washington Redskins in Landover, Md., Sunday, Oct. 21, 2018. Gary Brown, who rushed for 4,300 yards while playing on three NFL teams in the 1990s before going on to coach running backs in the pro and college ranks, has died. He was 52. Wisconsin’s athletic department and the Dallas Cowboys announced that Brown died Sunday, April 10, 2022. (AP Photo/Mark Tenally, File)

Gary Brown, who rushed for 4,300 yards while playing on three NFL teams in the 1990s before going on to coach running backs in the pro and college ranks, has died. He was 52.

Wisconsin’s athletic department and the Dallas Cowboys announced that Brown died Sunday. No cause of death was disclosed. Brown had battled cancer on multiple occasions.

Brown had coached Wisconsin’s running backs last season before departing for health-related reasons. He coached the Cowboys’ running backs from 2013-19.

“I am deeply saddened by Gary’s passing,” Wisconsin coach Paul Chryst said in a statement. “Though he was only on our staff for a year, he had a profound impact on our players and our program. We are all better people for having known Gary.”

He spent the 2020 season away from football, with his wife disclosing on social media at the time that a tumor had been found around the bile duct and head of Brown’s pancreas. Brown had dealt with colon and liver cancer about a decade earlier.

“What it did for me is it made me appreciate every day, made me sort of maximize every day and make sure you don’t leave anything on the table in life, with your family, with football, whatever you’re doing at that particular point,” Brown said last summer. “It just made me focus on what’s good in your life and take advantage of everything you have in your life.”

Brown followed that up with a productive coaching career.

When Brown worked as the Cowboys’ running backs coach on Jason Garrett’s staff, DeMarco Murray and Ezekiel Elliott each won NFL rushing titles and Darren McFadden had a 1,000-yard season. The Cowboys averaged at least 4 ½ yards per carry in each of Brown’s seven seasons.

“Gary Brown had a big heart partnered with a big smile and a big personality,” Cowboys owner Jerry Jones said. “His energy and spirit were infections. He lit up every room he walked into and touched the lives of those who knew him in such a positive way.”

Brown also had a four-year tenure as the Cleveland Browns’ running backs coach. Peyton Hillis and Trent Richardson each had 1,000-yard seasons while Brown coached them.

After taking the 2020 season off for health reasons, Brown coached Wisconsin’s running backs last season. Brown played a big role in the emergence of Braelon Allen, who ran for 1,268 yards and eight touchdowns his freshman season after most schools had recruited him to play safety or linebacker.

“Everything I did was really because of him,” Allen said last month. “When I came in, I didn’t know the first thing about really playing running back. I just kind of knew how to run the ball. My growth from fall camp to the end of the season was crazy, and really all the credit’s due to him.”

Brown didn’t join Wisconsin’s team for the Las Vegas Bowl . School officials announced last month that Brown was stepping away from coaching to assume an off-field role with the program.

His coaching career also included stints at Lycoming College (2003-05), Susquehanna University (2006-07) and Rutgers (2008). He helped coach running backs at the New York Giants’ training camp in 2005 and worked with the Green Bay Packers in 2006 and Carolina Panthers in 2007 as part of the NFL’s minority coaching fellowship program.

Survivors include his wife, Kim, and three children.