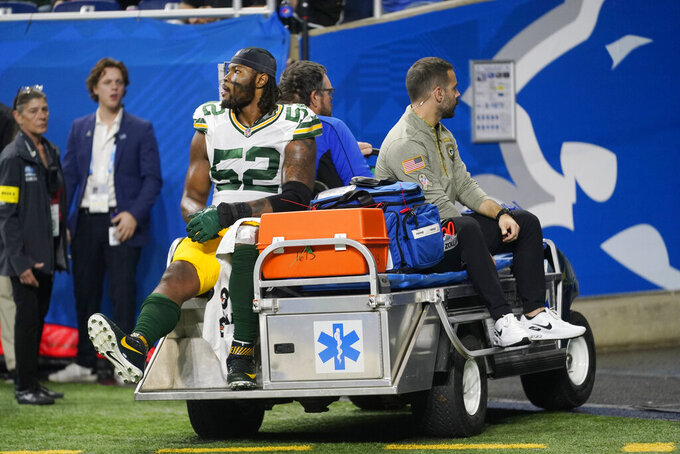 Green Bay Packers linebacker Rashan Gary (52) is carted off the field during the second half of an NFL football game against the Detroit Lions, Sunday, Nov. 6, 2022, in Detroit. (AP Photo/Paul Sancya)

The Green Bay Packers keep taking hits on and off the field as the three-time defending NFC North champions have watched their playoff chances dwindle to a remote possibility well before Thanksgiving.

Green Bay (3-6) has lost five straight games for the first time since 2008, which was Aaron Rodgers’ first year as the starting quarterback. The Packers must try to escape this tailspin without some key players.

Outside linebacker Rashan Gary, who has a team-high six sacks, is expected to miss the rest of the season after injuring his right knee Sunday in a 15-9 loss at Detroit.

“It’s a tremendous loss,” Packers coach Matt LaFleur said Monday. “Not only just from obviously a production standpoint, just, man, he is a guy that just competes at the highest level. He is one of the grittiest guys that’s on this team. And just the effort that he brings on a daily basis is definitely going to be missed.”

LaFleur couldn’t rule out the possibility that other Packers might have suffered season-ending injuries Sunday, but remained hopeful while players underwent additional tests. The biggest concern surrounded cornerback Eric Stokes, who hurt his knee and ankle.

This flurry of injuries comes as Green Bay enters perhaps the toughest stretch of its schedule, starting with a Sunday night matchup against the Dallas Cowboys in former Packers coach Mike McCarthy’s return to Lambeau Field.

“I challenged everybody to dig a little bit deeper and continue to look at yourself and ask yourself what can I do better?,” LaFleur said. “Because we need that, the collective effort in order for us to make that jump and come out in top. But certainly everybody’s extremely frustrated.”

This wasn’t what Rodgers was expecting when the four-time MVP decided to return to Green Bay rather than retire or pursue a trade. Nor was it what the Packers anticipated when they signed Rodgers to a contract extension that essentially impacted their future for the possibility of winning one more Super Bowl with the future Hall of Fame quarterback, who turns 39 on Dec. 2.

Rodgers threw three interceptions — matching a career high — in the loss at Detroit as his body language frequently made his frustration obvious.

“This is a lot of life lessons for sure this year,” Rodgers said. “But luckily, it’s not over. There are still a lot of games left. We’ll be counted out probably by many. We’ll see how we respond.”

The defense limited Detroit to 15 points. The Lions had been averaging 35.8 points at Ford Field this season and hadn’t been held below 27 points in any of their four previous home games.

Green Bay couldn’t crack double digits against a Lions team that was ranked last in the NFL in total defense and scoring defense. The Packers reached Lions territory without scoring in six separate drives. Each of Rodgers’ three interceptions came after Green Bay moved inside the Detroit 25, including one on first-and-goal from the 5 and another on fourth-and-goal from the 1. ... One week after the Packers rushed for a season-high 208 yards at Buffalo, A.J. Dillon and Aaron Jones were limited to a combined 59 yards on 20 carries. Rodgers was Green Bay’s leading rusher with 40 yards on four attempts. ... The Packers have committed 25 penalties over their past three games.

Rodgers had multiple red zone interceptions in a single game for the first time. Rodgers has thrown seven interceptions this season, his highest season total since 2016. Entering Monday, h e ranks 16th in the NFL in quarterback rating after leading the league in that category during his MVP seasons of 2020 and 2021. ... WR Sammy Watkins had just one catch for 9 yards. Watkins has four receptions for 48 yards and no touchdowns in three games since coming off injured reserve.

Watson left the Buffalo game with a concussion and was evaluated for a concussion again on Sunday. LaFleur said Monday it turned out that Watson didn’t have another concussion in the Lions game.

“Matter of fact, he was dying to go back in the game, and we thought it was best to shut him down because of what transpired in Buffalo,” LaFleur said. “But to his credit, he was adamant and he cleared everything. So, I know he took a nice shot in the chest, and he lost his breath for a minute.”

6 — The Packers haven’t lost six consecutive games within the same season since 1988, when they dropped seven straight in a 4-12 season. Green Bay will try to avoid a sixth straight loss on Sunday night.