Germany edges past UK as Europe's leading market for NFL 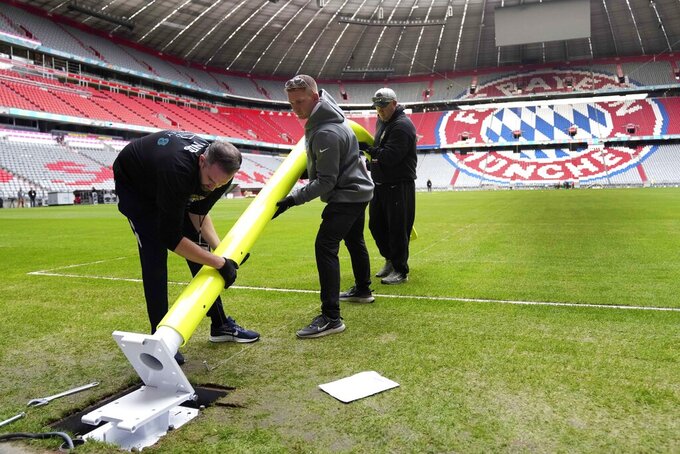 MUNICH (AP) — Seattle Seahawks fan Lukas Spiess was shocked at what he noticed while at a Stuttgart soccer game a few weeks ago.

“This elderly gentleman a few rows in front of me was playing fantasy football on his phone,” said Spiess, president of the German Sea Hawkers fan club. “That’s not something I would have expected.”

The NFL has arrived in Germany.

The Tampa Bay Buccaneers will play the Seahawks at Allianz Arena in Munich on Sunday in the first-ever regular-season NFL game in Germany. Over the next three seasons, Munich will host another one and Frankfurt two.

The U.K. and Germany each have 3.3 million “avid fans” of the NFL in a category that’s been growing quickly for both, but Germany has slightly more “casual” fans — 17 million, Gosper said. London has been hosting regular-season games since 2007.

Germany edged past Britain in the past 12 months, Gosper told a recent sports marketing conference in Düsseldorf.

With Europe’s largest economy, Germany was a no-brainer for the NFL and the country has supported American football in the past. NFL Europe ultimately failed, but in its final season in 2007, five of the six teams were German. The Frankfurt Galaxy and Rhein Fire in particular drew good crowds.

Interest really took off after 2015, when games became easily accessible to viewers on a prominent free-to-air channel.

“I feel like it’s accelerating exponentially,” said Spiess, a 31-year-old software engineer. ”Through the help of social media, too, there’s this whole buzz around it. Being an American football fan is cool now."

Gosper acknowledged the NFL is “probably a little late” coming to Germany and said adding a 17th game to the schedule was key.

“Having that (extra game) enabled us to move into Germany, but it probably was a market that was ready to see an NFL game here a lot earlier,” Gosper said at the SPOBIS conference in late September.

But he said interest in the league trumps any one star.

“The excitement is so big that you could almost put out any team to play in Germany and people would love to attend the game,” Steinforth said.

The online queue when tickets went on sale in July hit 770,000, though it's not clear if some were bots or if that number of people were on devices. In any case, the demand was more than double the London games, which typically sell out quickly.

“I was trying on three different devices,” said Spiess, who struck out but then landed tickets through a friend in Seattle. “A lot of people are still desperately hoping to be able to find a couple of leftover tickets.”

A lot of German fans are coming to Munich even without tickets, he said, “to get as much of the experience as they can.”

Allianz Arena, home of soccer club Bayern Munich, will be at about 67,000 capacity Sunday, league officials said, though the stadium holds more for soccer matches.

The Bucs are one of four teams that have international marketing rights in Germany. The others are the Carolina Panthers, Kansas City Chiefs and New England Patriots. That means they can cultivate fans and commercial deals in the country.

The Bucs will get a boost from hosting, but the other three are all holding events in Munich this week, as well, to scoop up as many “undecided” fans as possible.

“Not only is it a big pool, but the demographic of that pool is very valuable,” Chiefs president Mark Donovan said, citing the 18-to-34 age range. “A big portion of that demo have already indicated a desire to be involved in the NFL. They follow the NFL in some way shape or form — players, teams, league — and they’re undecided.”

The NFL and the Bundesliga recently agreed to collaborate on fan acquisition and broadcast technology. Teams with rights in countries can work with individual clubs, as the Panthers did in co-hosting a watch party with Eintracht Frankfurt.

Germans got a taste of football when American troops stationed here staged games in the 1970s. The German Football League launched in 1979, and the country has a soccer-style club system that develops young players.

NFL commissioner Roger Goodell said a preseason game in August 1990 was a turning point. The Chiefs played the Los Angeles Rams at Olympic Stadium in West Berlin after the Berlin Wall fell and just before reunification.

Media reports said there were 55,000 fans, many of whom didn’t understand the game but liked the Americana aspects like tailgating, cheerleaders and frisbee-chasing dogs.

“It really ignited our passion for saying we really do believe we can bring more football here in Europe," Goodell told a fan forum in London last month.

The early version of NFL Europe launched the following spring.

Meanwhile, the European League of Football recently completed its second season, with seven of its 12 teams in Germany before it expands in 2023. The NFL allowed the new league to use team names from the NFL Europe days.