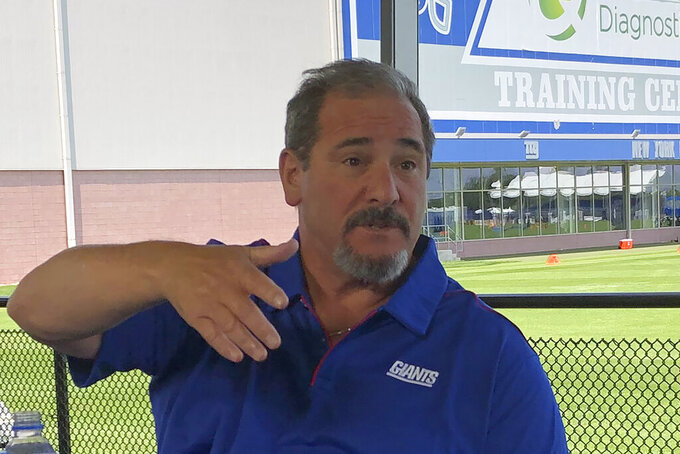 EAST RUTHERFORD, N.J. (AP) — A year after fighting off an aggressive cancer, New York Giants general manager Dave Gettleman is thankful to be alive and spirited as ever.

He's hoping the offseason moves that included the highly criticized trade of Odell Beckham Jr. will turn around a team that has made the playoffs once since 2011.

Speaking on the second day of training camp, Gettleman said Friday the Giants have added depth and a slew of young talent to a team coming off a 5-11 season. Improvement will signal success, he said, adding change isn't instantaneous.

"It's about getting better every day, which is what we are looking to do," Gettleman said.

The 68-year-old GM refused to address recent comments from Beckham, who said the Giants showed a lack of respect in how they informed him of the trade to Cleveland. Beckham was overseas when it happened.

"Odell plays for the Cleveland Browns now and we are moving on. Wish him the best." Gettleman said, adding he was not going to answer any questions about Beckham.

He wanted to talk about his team and he did. The only time he struggled was discussing his lymphoma, which is now in remission.

"A year ago I was fighting for my life," Gettleman said.

After saying the words, he stopped talking for almost 10 seconds and took a drink of water. His eyes welled.

"But I am here and I am healthy and I am feisty," he said. "Like I said at my opening presser, I come in every day to kick some (butt). I feel great."

He laughed when asked how much longer he wants to work, saying he feels like he is 10 years old and he is excited to be doing his job.

Gettleman asked fans to give him and Pat Shurmur and his coaching staff credit for their experience that led to the decisions that were made. Not only the Beckham deal but the trade of linebacker Olivier Vernon to the Browns; the decision not to re-sign perennial Pro Bowl safety Landon Collins; and the drafting of quarterback Daniel Jones this spring with the sixth pick overall.

"Unfortunately you can't turn this thing on a dime," Gettleman said. "It's impossible. I appreciate their (the fans) passion and concern. We want to win just as badly as they do. If we don't win, we're looking for a new address. I would just say 'trust.' We are working our fannies off."

The Giants had a 3-13 record in 2017, a contentious year that saw coach Ben McAdoo and general manager Jerry Reese fired in early December. Gettleman was hired shortly after those moves and the team won two more games last season.

Instead of saying Jones was going to be a future star, he said the 22-year-old rookie has a big upside.

The decision on when the switch will be made will come from Shurmur, Gettleman said, adding the two men talk all the time. The team does not have a plan that Jones definitely takes over if the Giants get off to such-and-such a record, he said.

When the time comes for Jones to take over, he will let Manning know with dignity.

"As long as you do everything the right way, that's how you prepare yourself," Gettleman said. "In your mind go through the things you need to go through. You do it like a pro. But there is always the human piece of it."