Giants back at work with Brian Daboll running the show 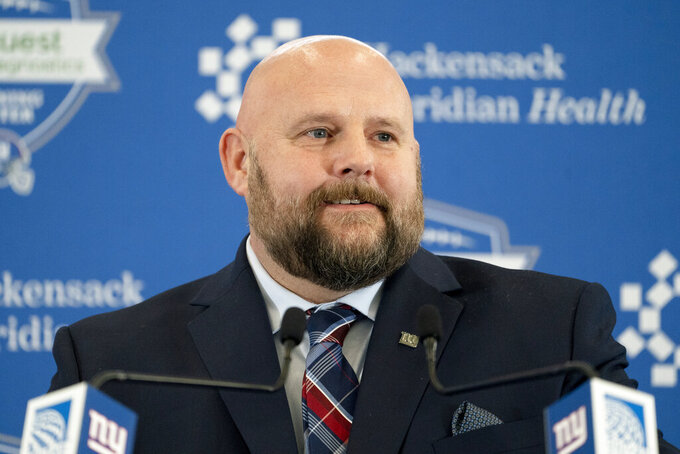 EAST RUTHERFORD, N.J. (AP) — Brian Daboll looked a little uncomfortable when he was introduced as the New York Giants coach in late January.

It had nothing to do with either his coaching ability or handling his first news conference as the head man. The former Buffalo Bills offensive coordinator seemed out of place wearing the jacket and tie. He was like a child waiting for the big family function to end so he could chuck the good clothes and put on his sweats.

When the Giants reported to organized team activities on Monday — the NFL gives new coaches a head start — Daboll laid out some of his ground rules. He wants his players to win every day, work hard, improve, act like a pro and be accountable.

He also told them about his dress code. Casual. Sweats, if you want. Giants' gear mandatory.

“I had a chance to go in everybody’s meeting room and kind of talk to them about expectations and standards and get to know them a little bit,” Daboll said. “So it’s been a good start. We’ve been busy.”

Daboll said attendance was very good for the voluntary workouts. He would not give the exact number of players who attended and he refused to discuss the status of star cornerback James Bradberry, who will have a cap hit of $22.8 million in 2022.

The Giants could reduce the cap hit by trading him. Kansas City might be a possible landing point.

Chris Coy, Bradberry's agent, declined to comment on Bradberry's future Monday in a telephone call with The Associated Press.

Since taking the Giants job and replacing Joe Judge after a 4-13 mark in 2021, Daboll has hired a staff, developed playbooks, worked on planning practices and meetings. He also has talked with trainers and doctors on cutting down injuries, a major problem last season.

Daboll has let his scouts and assistant coaches handle recent pro days with college players, although he said he watches the videos of those workouts.

Daboll plans to meet with his staff and the scouts soon to discuss the draft at the end of the month and then sit down with new general manager Joe Schoen to talk about it some more.

Daboll insists he will be flexible with his approach to coaching, doing what is best for his players.

“It’s no different than game-planning for an opponent week to week,” he said. "Those things change. I think you have to have flexibility in the job that I’m in right now.”

Offensively, the focus will be on quarterback Daniel Jones entering his fourth season. He missed the end of last season with a neck injury but said he will be ready to go.

The Giants have had five straight losing seasons and Jones has a 12-25 record. The former Duke star was the sixth pick overall in 2019.

Despite the lack of success, several veterans were willing to renegotiate their contracts to come back, including receiver Sterling Shepard, cornerback Adoree Jackson and linebacker Blake Martinez.

Shepard, who tore his left Achilles tendon late last season, said he wanted to return for a seventh season and the Giants wanted him back. He is not sure when he will be ready to play.

Martinez, who tore an ACL in the third game last season, said he did what was best for him and his family in reworking his deal. He likes new coordinator Wink Martindale's blitz-heavy defense, adding there was a lot of excitement about the new staff.

“They want to just make us a better team,” Martinez said. “I think that’s what kind of every single person is going to go off of.”