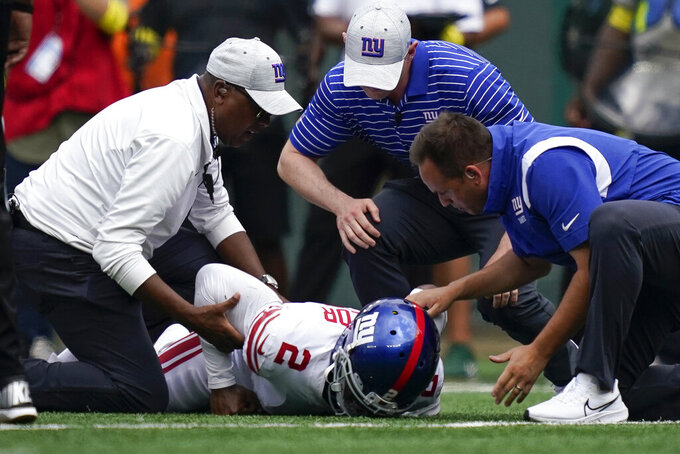 EAST RUTHERFORD, N.J. (AP) — Giants backup quarterback Tyrod Taylor was carted from the sideline Sunday after injuring his back in the annual preseason game against the rival New York Jets, but coach Brian Daboll didn't think he was seriously hurt.

“He just landed hard,” Daboll said of the injury late in the first quarter. “I talked to him at halftime.”

Clemons fell on top of Taylor as the two hit the artificial turf. The 12-year veteran was in obvious pain and he lay on the ground for a couple of minutes before jogging off the field. As soon as he reached the sideline, he went to his knees. Medical personnel examined him in the tent behind the bench and he was driven to the locker room.

Taylor was signed this year to back up Daniel Jones, who was given the game off. Third-string quarterback Davis Webb took over with 2:09 left in the first quarter.

Taylor was not available for comment after the Jets posted a 31-27 win to cap a 3-0 preseason. The Giants finished with a 2-1 record.

The Giants also had Bellinger and defensive lineman Jalyn Holmes leave in the first half because of possible concussions. Neither returned.

Webb finished 30 of 38 for 202 yards and one touchdown pass. He was at the helm on four scoring drives: two touchdowns and two field goals.

Webb said this has been his best training camp in four seasons as a professional. He threw two late TDs last weekend to rally to Giants (2-1) to a win over Cincinnati.

Webb said his biggest improvement has been being able to escape pressure and to make throws on the run. He also benefitted from working with Daboll and quarterback Josh Allen with the Bills.

“This offense is a lot of fun to play and it takes a lot of reps," Webb said. “But I think once you get it, get it rolling, you can you can have a lot of fun with it.”

The Giants have to cut 27 players by Tuesday and Webb's status for making the 53-man roster is a question mark. While he has played well, the Giants may not carry three quarterbacks.

“It was a lot of fun this preseason,” Webb said. “Hopefully, it works out.”