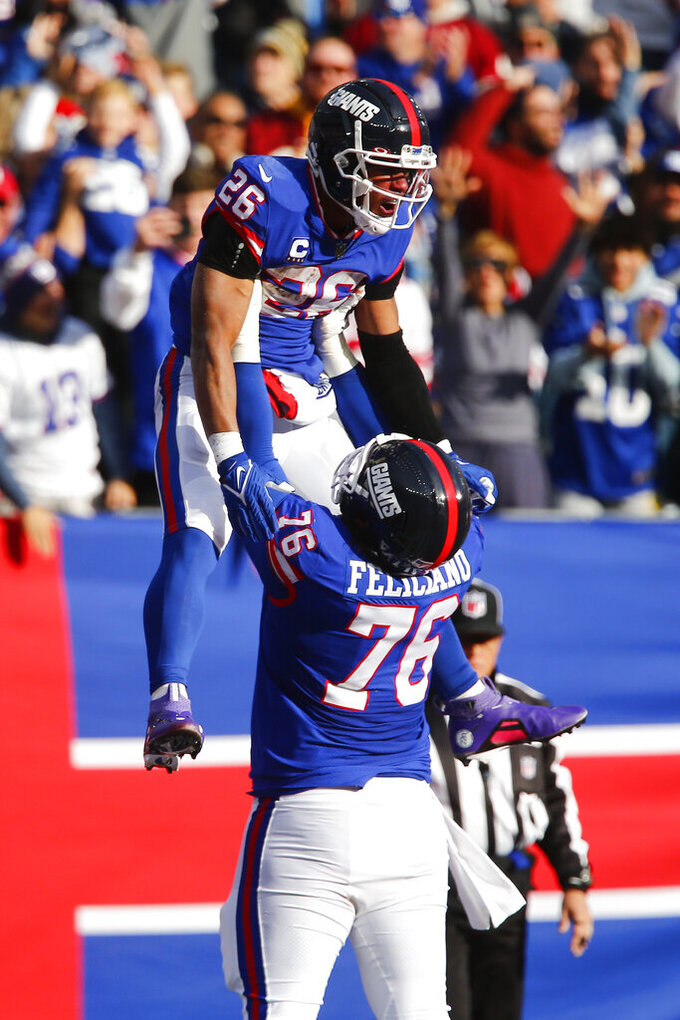 EAST RUTHERFORD, N.J. (AP) — Ticked off about a fourth-quarter taunting penalty, New York Giants center Jon Feliciano ripped the officials after a 20-all tie with the Washington Commanders on Sunday.

“It (hurts), especially when you are playing two teams,” he said.

With the Giants leading 20-13 and 6:22 left in regulation, New York got the ball at the Washington 47 following a punt.

Daniel Jones connected with wide receiver Darius Slayton on first down for 12 yards, putting the ball at the Commanders 35.

After the completion, Felicano ran down toward Slayton near the Giants' sideline. When he got there, he lifted his arms and flexed his muscles.

A flag came out and referee Brad Allen said Feliciano was penalized 15 yards for taunting after the play was over. It pushed the ball back to midfield, and the Giants never got a first down.

Down judge Sarah Thomas was closest to the play, but it was unclear who threw the flag.

Graham Gano, who had previously kicked a 48-yard field goal in that direction, never got the chance to give New York a 10-point lead.

Washington took the ensuing punt and drove 90 yards for a tying touchdown with 1:45 to play.

Feliciano said all he was doing was celebrating with teammates. He also anticipated the league might not be pleased with his postgame comments.

Giants coach Brian Daboll said Feliciano was trying to tell Slayton he made a good, strong run after the catch.

“It was (near) all those players,” Daboll said. “So again, how the guy looks at it and interprets it, I don’t think he can hear what Jon is saying to Slayton. So, they ended up calling it, which was obviously, we shouldn’t even be in that situation.

"We get the ball there; it’s going to be a first down. We’re at the 35 (yard line). Probably (would have) make it a two-score game. Those are things we can’t even make it close.”