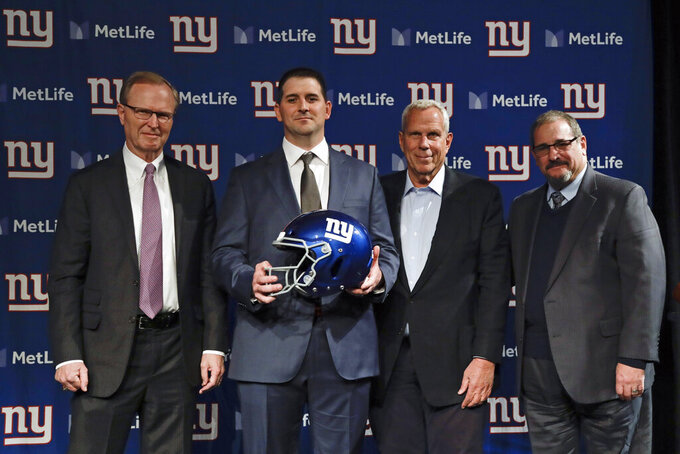 EAST RUTHERFORD, N.J. (AP) — The low point in New York Giants co-owner John Mara’s more than 30-year association with the franchise was seeing the team's struggles in a four-win season that led to the retirement of general manager Dave Gettleman and the firing of coach Joe Judge.

Speaking less than 24 hours after firing his third coach since early December 2017, Mara said Wednesday the Giants need to build from the ground up again after posting a 4-13 record and missing the playoffs for the fifth straight year.

“Honestly, I would have to say yes, yes, it is,” Mara said of the 2021 being his low point. “I kept thinking during this season that we had hit rock bottom, and then each week it got a little worse.”

While he's certain Giants fans have little faith in his ability to pick the next general manager, he and co-owner Steve Tisch are confident they have assembled a good group of candidates. They are going to take their time, follow a process and find the right man.

Mara said the new general manager would lead the search for a coach, but there would be no package deals, where an incoming GM was guaranteed to bring in someone he worked with this past season.

In a roughly 18-minute Zoom call, Mara said he had regrets about past decisions but seemed confident the Giants would finally get it right this time.

He acknowledged this season was personally tough. He felt the team was pointed in the right direction after its 5-3 finish last season when the Giants were second in the weak NFC East in Judge's rookie year as coach. Seeing the team finish with a six-game losing streak in this injury-marred campaign and post a 10-23 mark in Judge's two-year tenure was a massive disappointment.

“We just got to a point where I thought we had dug ourselves a hole so deep that I didn’t see a clear path to getting out of it unless we completely blew it up and started it all over again with a new general manager and new head coach,” Mara said.

Mara and Tisch met with Judge on Monday and Tuesday, with Mara telling the coach late Tuesday he was being fired. Mara also fired Ben McAdoo and then-GM Jerry Reese in December 2017 and coach Pat Shurmur after the 2019 season.

“There is nothing more painful to me than making that long walk down the hallway to tell somebody, particularly a good person like Joe, that we’re making a change,” Mara said. “It’s gut-wrenching for me. It’s been gut-wrenching every time I’ve had to do it. And obviously, I’ve had to do it far too often lately. And that’s why we’re in this process again, and we’re going to get it right this time.”

Mara said there was no final straw that led to the firing of Judge, who he believes will be a good NFL head coach at some point. He said it was a culmination of things.

He noted he was not happy with Judge's answers in a postgame interview highlighted by an 11-minute answer in Chicago on Jan. 2. He also said his decision to run two quarterback sneaks inside his own 5-yard line in the final game against Washington because the offense was inept was interesting.

Mara said he compiles lists of general managers and coaches, so one was available when needed. The Giants' GM list had nine candidates Tuesday. All of them are currently employed, so they would not have been able to speak with them until the regular season ended. It explains why firing Gettleman during the season would not have sped the GM search.

Mara seemed a little defensive when asked why some of his family members were not held accountable for some questionable player moves.

He said Chris Mara and Tim McDonnell, his nephew and co-director of player personnel, evaluate players and make recommendations. However, he noted the two most important people in the building are the coach and general manager because they make all the decisions on players. John Mara says he has final approval, but he rubber-stamps their decisions if they agree almost all the time, unless a player has off-the-field issues.

Mara acknowledged he wanted to be a little more patient this season after so many firings, but just didn't see a clear path toward significant progress. He added some candidates may have doubts about the Giants' willingness to be patient with the process of turning things around, so they need to allay those fears.