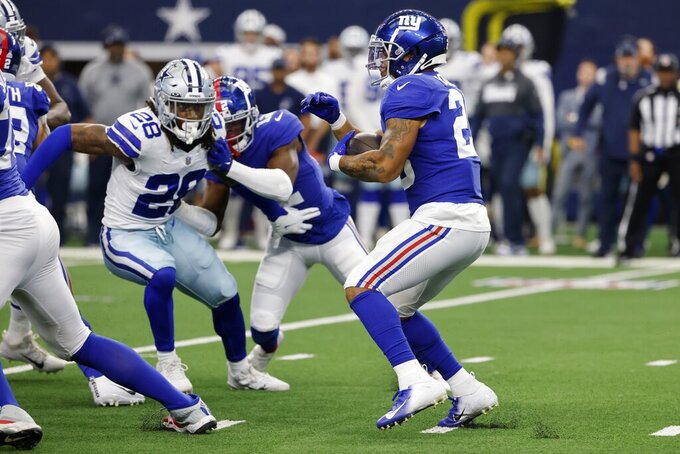 ARLINGTON, Texas (AP) — New York Giants quarterback Daniel Jones was dazed and wobbly when he got up after taking a crushing hit trying to run into the end zone.

Running back Saquon Barkley and their top two receivers weren’t options for the Giants on that third-and-goal play from the 1 before halftime in a 44-20 loss Sunday against the NFC East-leading Dallas Cowboys. They were all already hurt, and there was also an injury-shuffled offensive line in front of Jones.

The concussion to Jones, who stumbled and nearly fell down before getting taken off the field on a motorized cart, was another significant setback from the already-reeling Giants (1-4).

“I thought he just got the wind knocked out of him. He laid there for a second, got up and put his hands on his knees,” said receiver Kenny Golladay, who was watching from the sideline after hyperextending his knee early in the game. “Anytime you see any player kind of stumble a little bit ... it’s kind of scary.”

Giants coach Joe Judge provided no specific updates on Jones, Barkley or any of the injured players. He said he had checked on both of them, but didn't share anything about those brief conversations.

Barkley, who missed most of last season after a torn ACL in his right knee in Week 2, had his left foot in a boot and was using crutches after injuring his ankle when going out for a pass about midway through the first quarter.

Giants left tackle Andrew Thomas was active but didn’t play because of a foot injury, though Judge said he was available if needed. Nate Solder moved from right to left tackle, Matt Peart took Solder’s spot. Solder was the starting left tackle before he opted out of the pandemic-altered 2020 season.

Jones was running toward the left pylon when he cut up toward the end zone. There was almost immediately helmet-to-helmet contact with linebacker Jabril Cox before defensive end Chauncey Golston helped finish the tackle, which ended with Jones’ facemask in the turf.

When Jones got up after the play, took a few steps and stumbled forward, back judge Brad Freeman and Cowboys safety Jayron Kearse both quickly reacted to try to help the clearly concussed quarterback.

Devontae Booker leaped over the top for a fourth-down TD to tie the game 10-10 on the play after Jones got hurt. But the Giants were still on way to their most lopsided loss against their division rival since a 31-7 setback at home in 1998.

Wide receivers Sterling Shepard and Darius Slayton missed the game with hamstring injuries, then Golladay injured his knee before halftime against the Cowboys. That was before rookie Kadarius Toney got ejected with just over six minutes left in the game after throwing a punch during a scuffle at the end of his 13-yard completion.

“There’s a pretty distinct line in terms of competing and doing things that we’re not condoning as a team that put us behind,” Judge said.

Toney had 10 catches for 189 yards before the ejection.

Golladay said Toney is showing just what a playmaker he can be, but also told the young receiver to learn from that penalty.

“The score wasn’t looking right, but at the same time, what I told him, you did everything that you could possibly do as far as being receiver, going there and making plays, doing what’s best for the team,” Golladay said. “But plays like that, that can hurt the team.”

That is a different kind of hurt than all of those injured players.