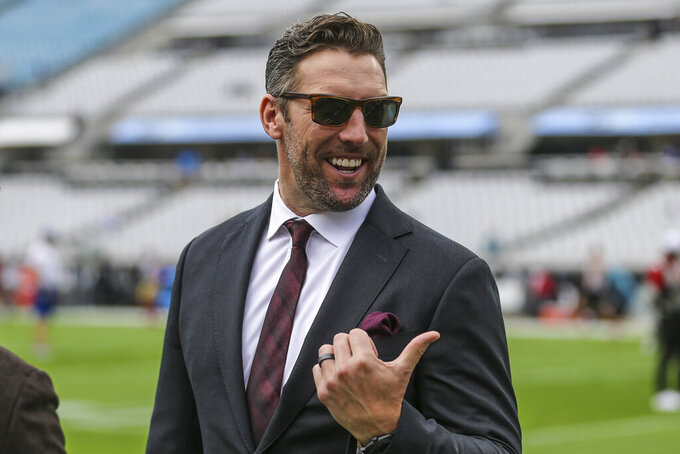 FILE - San Francisco assistant general manager Adam Peters walks the sideline during warmups before an NFL football game against the Jacksonville Jaguars, Nov. 21, 2021, in Jacksonville, Fla. The New York Giants seemingly have finished their interviews for a general manager, meeting with Peters on Thursday, Jan. 20, 2022. Peters was the third candidate to have a second interview for job that opened when Dave Gettleman retired a day after the Giants finished a 4-13 season. (AP Photo/Gary McCullough, File)

Peters was the third candidate to have a second interview for the job that opened when Dave Gettleman retired a day after the Giants finished a 4-13 season.

New York, which has not made the playoffs since 2016, also had two interviews with Buffalo Bills assistant general manager Joe Schoen and Kansas City’s executive director of player personnel Ryan Poles.

There was no immediate indication when the Giants planned to announce their new general manager. His first job will be to hire a new coach. Joe Judge was fired the day after Gettleman retired. Judge had a 10-23 record in two seasons.

Peters met with co-owners Steve Tisch and John Mara, along with Mara's brother Chris, the senior vice president of player personnel, at the team's headquarters. He also got a tour of the facility and met other members of the front office.