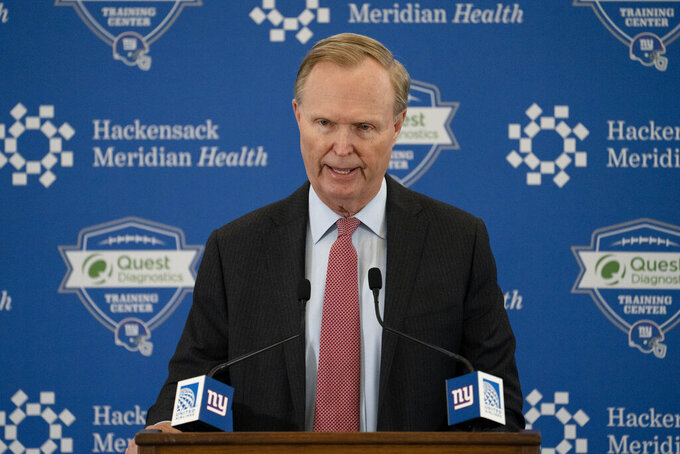 In hiring Bills offensive coordinator Brian Daboll on Friday, co-owners John Mara and Steve Tisch got someone who Schoen has worked with well the last four years in Buffalo.

“In the end, it was obvious Brian has spent his career preparing for this moment,” Tisch said. “He is creative, thoughtful, determined, and Joe and Brian are the perfect complement to each other. We will do everything we can to support their process as they build toward the 2022 season and well after that.”

Daboll was the first person Schoen interviewed being hired last Friday, and he quickly got a second interview Tuesday.

“We interviewed several people who are incredible coaches and all of whom are going to enjoy much more success in this league in their current positions and as a head coach,” said Schoen, who was the Bills assistant general manager during Daboll's tenure.

“With that said, we – me and ownership – all felt Brian is the right person to serve as our head coach,” Schoen added. "Over the last four years, I have observed first-hand Brian’s strengths as a leader – he is an excellent communicator, intelligent, innovative, and hard working. Brian’s genuine and engaging personality is refreshing.”

Daboll came to the Bills in 2018 after helping Alabama win its 17th national championship as the Crimson Tide’s offensive coordinator and quarterbacks coach.

Mara said Daboll's approach to coaching and team building was what the franchise wanted. The Giants last made the playoffs in 2016, the only time since winning their fourth Super Bowl in February 2012.

“Brian has had tremendous experience in the NFL and has been part of multiple championship teams,” Mara said. "It is clear he used that experience to grow and develop into a dynamic leader, one that we are confident is the right fit as our head coach.”

Daboll's biggest job will be to help quarterback Daniel Jones improve in his fourth season and get one of the NFL's worst offenses back on track. His immediate job is to assemble a staff that he wants to emphasize teaching and collaboration and put players in position to win.

“That’s why all of us do this,” Daboll said. "To teach, to be successful, to develop talent, and to win. I have a pretty good idea where our fan base’s feelings are right now, and I get it. I promise we will work our tails off to put a team on the field that you will be proud to support and give us the results we all want.”

Daboll’s offense excelled this past season as Buffalo won its second straight AFC East title with an 11-6 record with quarterback Josh Allen running the show. The Bills finished third in the NFL, averaging 28.4 points, and fifth with 381.9 yards a game. Allen was sixth in the league with a franchise-record 409 completions, seventh with 36 touchdown passes and eighth with 4,407 yards. Allen’s favorite target, wide receiver Stefon Diggs, caught 103 passes for 1,225 yards and 10 touchdowns.

Daboll has 20 years of NFL coaching experience. He spent 11 seasons with the New England Patriots (2000-06, 2013-16) in a variety of roles and helped the franchise win five Super Bowls. Daboll began his coaching career at age 24 in 2000 — Bill Belichick’s first year with the team — as a defensive coaching assistant. He was promoted to wide receivers coach in 2002.

Prior to entering the NFL, Daboll spent a year (1997) as a volunteer assistant at William & Mary, That's where he first met current Bills coach Sean McDermott. He also served two seasons (1998-99) as a graduate assistant for Nick Saban at Michigan State.