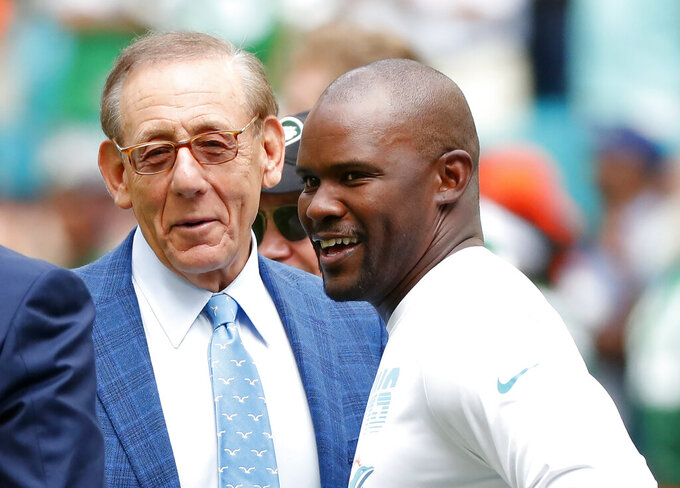 The Giants announced Monday that Brandon Brown will work with new general manager Joe Schoen, leading the player personnel department and helping other parts of the football operation.

“Brandon has a strong reputation around the league as a leader, evaluator and consensus builder,” Schoen said in a statement. “He is a tireless worker who has experience in pro personnel and college scouting. He has a progressive approach to the evaluation process.”

In the suit, Flores alleged the Giants gave him an in-person interview as a formality after they had decided to hired Daboll. He alleged he learned of the hiring after receiving a inadvertent text message from Patriots coach Bill Belichick, congratulating Daboll on getting the job. Both men worked for Belichick with the Patriots.

Flores also alleged the Giants gave him the interview to meet the league's Rooney Rule, which mandates teams interview at least two minority candidates from outside the franchise.

The Giants have denied the allegations.

Flores, who did not get a job after interviewing with Denver and was fired by Miami after consecutive winning seasons, maintains the NFL remains “rife with racism” even as it publicly condemns it.

The NFL has four minority head coaches with openings remaining in Houston and New Orleans. There are no Black team owners, just a handful of Black GMs and relatively few Black coordinators in a league where more than 70% of players are Black or another ethnic minority.

The 33-year-old Brown replaces Kevin Abrams, who was given the title of senior vice president of football operations & strategy Saturday. He had served as the Giants' assistant general manager for the previous 20 years under general managers Ernie Accorsi, Jerry Reese and Dave Gettleman.

His new title allowed Schoen to pick his own assistant general manager.

Brown spent the previous five seasons with the Philadelphia Eagles. He was promoted to the team’s director of player personnel in 2021, overseeing the Eagles’ pro scouting department. He also helped scout college prospects.

Prior to his tenure with the Eagles, Brown spent two seasons with the Indianapolis Colts as an advance scout (2016) and scouting assistant (2015).

After playing as a defensive back at Fordham, Brown earned a legal degree from Barry University Law School in Florida. While pursuing his degree, he worked as athletic compliance graduate assistant/football support at Central Florida.

The Giants also announced that co-director of player personnel Mark Koncz is not being retained. He had joined the team as a personnel consultant prior to the 2018 NFL draft.