Giants' Jones not focusing on a new deal after good start 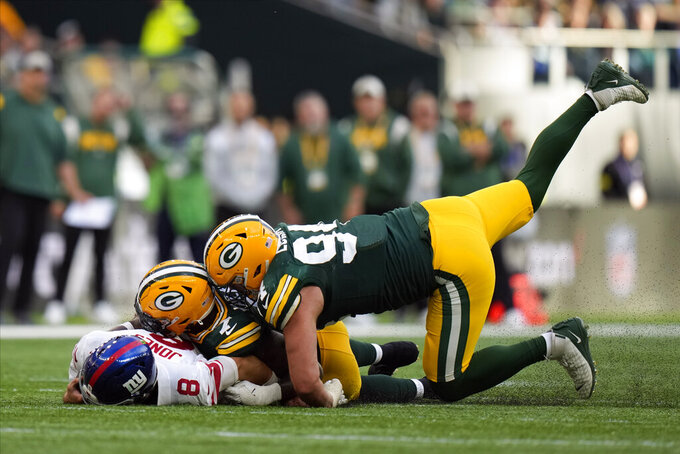 EAST RUTHERFORD, N.J. (AP) — Quarterback Daniel Jones isn't thinking about asking the New York Giants for a new contract despite having a good start to the season in what is a make-or-break year for him.

The Giants (4-1) didn't pick up the fifth-year option on Jones' rookie contract earlier this year so there is a chance this could be his final season with the team unless he gets a new deal or the team franchises him.

“It’s certainly not my focus," said the 25-year-old who was the No. 6 pick overall in the 2019 draft said of a new contract. “I think we’re all focused on whatever the next opponent is and making sure we go 1-0 that week. That’s been my focus and that doesn’t change. I think that’s consistent across the locker room.”

While Jones doesn't have overly impressive statistics, he has made the plays that have the Giants off to their best start since going 5-0 in 2009. He has also shown toughness, leadership and a competitive nature.

“I don’t think it was ever really my focus to prove to people one way or the other,” Jones said. “My focus was to play as well as I thought I could play and put the team in a position to win. That doesn’t change for me. Each week, you try to get better, you try to improve and play the best football you can.”

This past week in a 27-22 win over the Green Bay Packers in London, Jones played on a sprained left ankle and led New York on five straight scoring drives.

“He’s been steady,” said wide receiver Darius Slayton, who was part of the Giants' 2019 draft class. “He hasn’t flinched at any point during the year no matter what’s being said on the outside or maybe what has or hasn’t gone his way. He’s been steady, he’s showed up to work, and he’s been a great leader for us. I think it’s shown on the field so far this year.”

Slayton caught six of Jones' 21 completions on Sunday for 79 yards.

“Obviously he’s playing some great ball right now,” Slayton added. “It’s pretty easy to be a receiver for us at the moment.”

Jones said his ankle was fine after the Packers' game and he expects it to be better Sunday when the Giants play host to the Baltimore Ravens (3-2).

The Ravens have eight interceptions, tied for the league lead with Buffalo and Pittsburgh.

Jones has done a good job of protecting the ball while under pressure. He has been sacked 15 times. He is 88 of 132 for 848 yards, three touchdowns and two interceptions. He has also rushed for 230 yards on 41 carries and scored two touchdowns.

Coach Brian Daboll said the Giants have been evaluating Jones' performance all season. He early analysis is he works hard and works well with his teammates.

“Each week, I think you get a little more comfortable,” Daboll said. “Again, we’re five weeks into, really, live competition. So, I think you learn a lot about players — not just Daniel, but everybody. And he’s done a good job for us.”

NOTES: Former heavyweight champion Deontay Wilder watched practice. He is scheduled to fight Robert Helenius on Saturday night in Barclays Center in Brooklyn. “Growing up, I played football, basketball, baseball and if I had time for soccer, I would have played that as well. But once I got into boxing, it just took over my life.” ... WRs Kadarius Toney (hamstring) and Kenny Golladay (knee) and DBs Tony Jefferson (foot) and Cor'Dale Flott (calf) did not practice Wednesday.