Giants' many mistakes prove costly in 20-17 loss to Chiefs 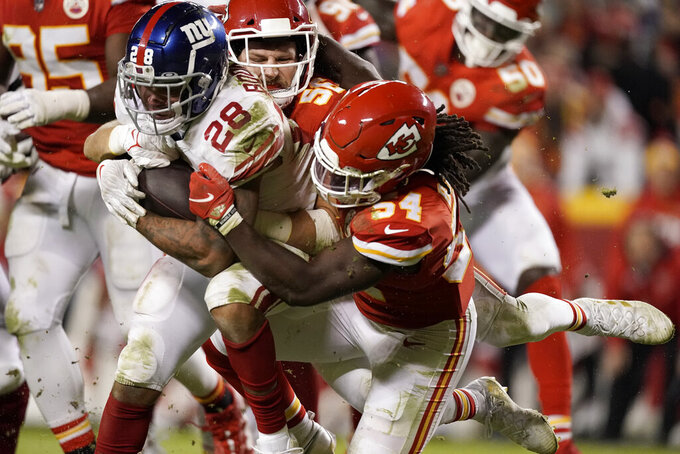 KANSAS CITY, Mo. (AP) — There wasn't any one play that doomed the New York Giants against Kansas City on Monday night.

There were about a dozen little ones.

The interception by Daniel Jones when he was caught staring down his target. Two personal foul penalties by linebacker Tae Crowder in the fourth quarter. The wobbly punt from Riley Dixon that set up the Chiefs for the go-ahead field goal with just over a minute left. And the breakdowns that kept New York from mounting its own comeback.

The result was a 20-17 loss that left the Giants ruing a major upset they let slip away.

“It was mistakes we made, bad decisions — the turnover was a big deal. Third-down executing and keeping drives going, and just being more consistent with execution,” Jones said. “I think we did some good things here there but ultimately it wasn't enough and wasn't consistent enough.”

The mistakes began with the Giants' first offensive play, when Jones threw an interception inside his own 20-yard line that allowed the Chiefs to capitalize for an early touchdown. And they didn't really end the rest of the first half.

After the Chiefs took a 14-7 lead, the Giants marched inside their 10-yard line in a bid to answer. But on third-and-4, Sterling Shepard ran an out route for two yards that left them facing fourth down rather than first-and-goal. And rather than go for it against one of the league's worst defenses, Giants coach Joe Judge opted to kick the easy field goal.

“We knew the game plan we wanted to play. We wanted to play on our terms and for a large part of the game we did,” Giants coach Joe Judge insisted. “We anticipated the answers they had and had a lot of the right changeups called.”

Indeed, the Giants had an opportunity to take the lead on the final drive of the first half.

They had moved swiftly to midfield in the closing minutes when Will Hernandez was called for a false start and Nate Solder for holding on back-to-back plays. And when Devontae Booker ripped off a 14-yard gain to at least give the Giants a shot at a Hail Mary, Jones lost track of the time and a delay-of-game took them out of range for it.

The biggest mistakes, though, came in the fourth quarter.

After the Giants had taken a 17-14 lead on a touchdown pass to Evan Engram, the Chiefs marched across midfield in search of an answer. That's when Crowder was hit with the first of his personal foul penalties, a 15-yard foul that helped to set up Chiefs kicker Harrison Butker for the 36-yard field goal that tied the game.

“We just cant have penalties like that, point blank, or any penalties. That comes down to how we execution on the field and coaching it better," Judge said. “There are situations that came up during the game that we have to eliminate if we're going to have any success.”

The Giants' ensuing drive was low-lighted by a personal foul on fullback Elijhaa Penny for taunting, followed by an ugly third-and-7 pass that fell incomplete and forced New York to kick the ball back to the Chiefs.

After they tried to help the Giants out with a holding penalty of their own, Oshane Ximines was called for offsides to wipe out Mahomes' second interception of the game. Crowder was called for a facemask on the next play to move Kansas City past midfield, and the Chiefs got the go-ahead field goal from Butker with 1:07 left in the game.

The final tally for the woebegone Giants: 10 penalties for 88 yards along with an interception and three sacks.

That's hardly the kind of night that will beat the two-time defending AFC champions.

“It's tough whenever you lose. You don't go to practice to lose,” said Giants wide receiver Kadarius Toney, who left with a thumb injury in the fourth quarter. “But at the end of the day, we have to go back and correct our mistakes-. It's simple.”