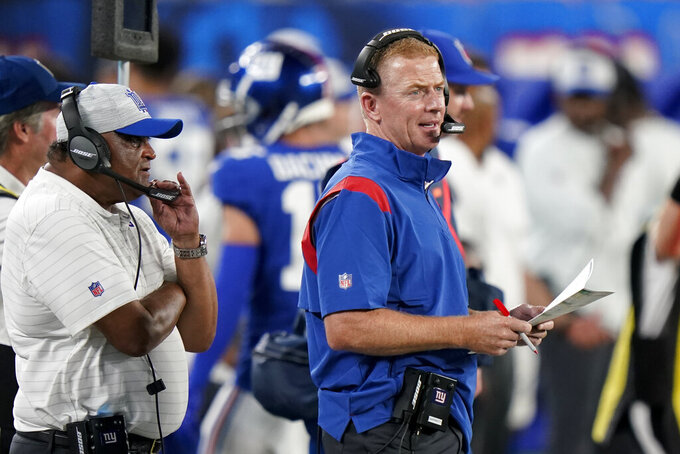 FILE- In this Aug. 14, 2021, file photo, New York Giants offensive coordinator Jason Garrett works the sidelines in the first half of an NFL preseason football game against the New York Jets in East Rutherford, N.J. A backup quarterback and holder for the Giants in 2001, Garrett spoke Thursday, Sept. 9, 2021, about the Sept. 11 attacks and the tragedy that claimed almost 3,000 lives that day. (AP Photo/Corey Sipkin, File) 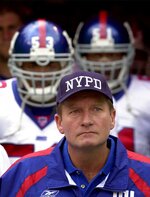 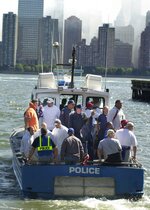 EAST RUTHERFORD, N.J. (AP) — Offensive coordinator Jason Garrett walked out to the patio of New York Giants headquarters expecting to talk about the season opener against the Denver Broncos on Sunday.

The first question wasn't about either his offense or the Broncos' defense. It was about something as stark for him on Thursday as it was on Sept. 11, 2001: The terrorist attacks that stunned the United States.

A backup quarterback and holder for the Giants at the time, Garrett spoke for nearly three minutes about the attacks that claimed almost 3,000 lives and led a ramped-up U.S. involvement in a fight against terrorism.

“It’s a tragic time in our country’s history and just having been here, the memories are really vivid for me,” Garrett said. “I can remember so many specific details of the day and certainly the week and the time to follow. It just was a really, really sad time.”

Garrett recently spoke with Kerry Collins, the Giants starting quarterback that season. The two marveled at how the area, the country and parts of the world came together after the attacks.

The Giants, who had lost the Super Bowl to Baltimore in January, had played a season-opening Monday night game against the Broncos in Denver and lost. They flew back to Newark International Airport after the game, and literally walked past some passengers waiting to board United Flight 93.

Terrorists highjacked that flight 40 minutes after it took off. Passengers tried to retake the plane and it crashed in a field Shanksville, Pennsylvania, killing 44 people, including four hijackers.

Giants coach Jim Fassel, who recently died, team officials and players made many trips to New York City after the attacks. They visited Ground Zero, where the Twin Towers were destroyed. They spent time at firehouses and police stations and talked to some children who lost their moms and dads.

“At least you felt like you were trying to do something,” Garrett recalled.

The Giants didn't play again until Sept. 23 when they went to Kansas City to face the Chiefs. That is never an easy place to play and Garrett said the fans made the Giants feel welcome. He remembered hearing a lot of Bob Dylan music being played, calling it surreal.

“This fan base in Kansas City that was always so behind their team was certainly behind the Chiefs, but you also felt their support for our team and for people in our area, and that was a great takeaway,” Garrett said.

He recalled hearing the national anthem and seeing teammates and others crying. It was extremely difficult to take a deep breath and then go play.

“Personally, for me, I held in that game for the first time, and I can remember the pressure of that,” he said. “Needing a field goal late in the game and Morten Andersen was our kicker and just making sure, ‘Hey, catch it and get it down. This is damn important.’ Good thing it all worked out.”

After the game Fassel had his team get close together in the locker room and team photographer Jerry Pinkus took a photo. A copy of the picture is in Garrett's office. He has another at his home.

“We felt a real burden and a responsibility to have success for this area and for the people who were going through such challenging times, and I thought that moment captured it where we all kind of came together,” Garrett said. “It’s still one of my favorite pictures I’ve ever had in football.”

A golf tournament was held for Fassel recently and Garrett said many of the people who came to the dinner were policemen, firemen and people the coach had stayed in touch with at 9/11.

Looking back, Garrett stressed that the greatest thing was seeing people come together for a cause.