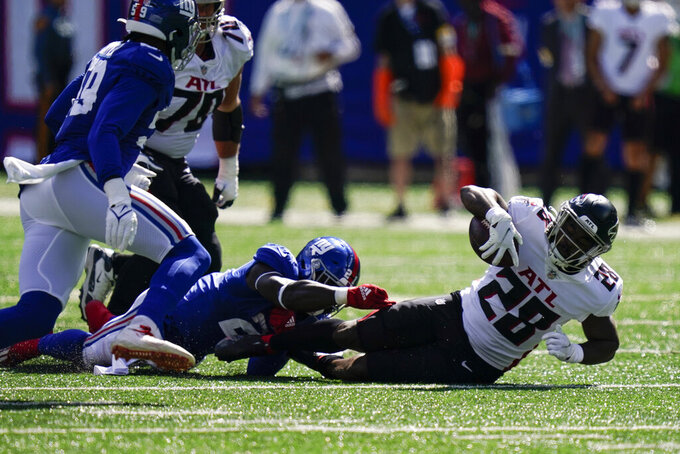 Atlanta Falcons running back Mike Davis (28) is tackled by New York Giants free safety Jabrill Peppers (21) before fumbling for a recover by Giant's Lorenzo Carter during the first half of an NFL football game, Sunday, Sept. 26, 2021, in East Rutherford, N.J. (AP Photo/Seth Wenig)

EAST RUTHERFORD, N.J. (AP) — The New York Giants have placed safety Jabrill Peppers on injured reserve with a rupture to the ACL and a high ankle sprain, both on his right leg.

Peppers was hurt in the third quarter on a punt return in the Giants’ 25-3 victory over the Carolina Panthers. He is the third of the Giants’ team captains to suffer a season-ending injury, joining center-guard Nick Gates (broken leg) and linebacker Blake Martinez (ACL).

Peppers is a five-year veteran who is in his third season with the Giants. He had 30 tackles (19 solo), including a 3-yard sack of Sam Darnold on Sunday, two tackles for loss, four quarterback hits and one pass defensed.

A 2017 first-round draft choice by the Cleveland Browns, Peppers was acquired in a trade, along with first and third-round draft choices, for Odell Beckham, Jr. on March 13, 2019. He has started 30 of the 32 games in which he’s played for the Giants.

Reed played in one game for the Rams this season and seven games as well as two postseason games last year.

Reed’s father, Jake, played in the NFL for 12 seasons with the Minnesota Vikings and New Orleans Saints.